America Being Herded Towards Famine And Disintegration

ENJOY YOUR $40,000 HAMBURGER! RED MEAT FROM THE ‘REPUBLICRATS’ AND ‘DESTROYING DIMMS’!

Fiat money (U.S. dollars sadly included) is currency usually without any intrinsic value, or comparatively very little (it does cost a few pennies to produce the paper, though no intrinsic value is imparted). Modern fiat currencies are usually printed on paper, where in earlier times everything from sea shells and colored pebbles to tally sticks were used to keep track of transactions.

One of the most famous of examples in American history was the paper currency issued by the Continental Congress during the Revolutionary War. An example that failed spectacularly because of unrestrained printing, “A little bit is good, more is bound to be better, we can control it.” Because of the Continental failure in money creation our Constitution that followed attempted to build in safeguards that would control inflation in the future, stipulating that in the future money HAD TO BE based on coinage of metal, but true to form, the Judiciary stepped in and destroyed that safeguard in less than 2 decades.

The following is a short explanation:

Last week a Republican House, a Republican Senate and a Republican President handed us a $400 Billion spending package increase pushing the current projected yearly deficit to more than a trillion dollars as Chuckie Shumer and B.O. bama smiled at each other while more than a few Republicans wearing masks, were seen scratching the Dimms backs.

Having had hopes for a genuine revival of America (MAGA), we now have to face the fact that most GOP people in Washington are no better than the Dimms, indeed worse, because most of them lied through their teeth, while posing as Americans. In the near future we can look forward to a doubling of many prices of necessary living expenses. When it runs its course and nears the end, $40,000 for a hamburger may become commonplace.

In last decade of the 1700s, France gave us a preview of what lies in the relatively near future for America. Highly recommended reading is FIAT MONEY IN FRANCE (less than 100 pages), by Andrew Dixon White, founder and first president of Cornell University. It’s available free of charge on the Internet.

Following that we have an astounding example of fiscal insanity in Germany in the years following WW1. Both are summarized here. Before the next election Americans had better get their heads out of their I-phones and read a little history. Published in 1914, Andrew Dixon White dissected the French money printing experiment, giving us a likely picture of what we will be seeing here soon in the “Good old USA.”

If our elected representatives of early days (most of which who ran as “fiscal conservatives”) had rejected the Globalist efforts that have plagued the United States from the beginning we would now have stable prices wherever they landed, prosperity for all, instead of for the rich few and a future. But as usual, it can all be traced back to the Bible the only book of absolute truth that ever existed, 1Ti 6:10 For the love of money is the root of all evil… AND, the sin nature of all men. For the lazy readers however (those who get their educations from the boob tube), we will summarize below some of the high, or should we say “low,” points of the French and German attempts at money manipulation. 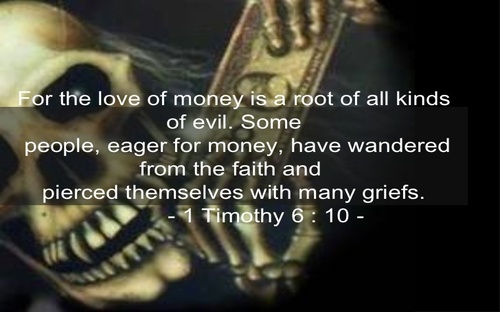 (1) Notwithstanding the fact that the paper currency issued was the direct obligation of the State, that much of it was interest bearing, and that all of it was secured upon the finest real estate in France, and that penalties in the way of fines, imprisonments and death were enacted from time to time to maintain its circulation at fixed values, there was a steady depreciation in value until it reached zero point and culminated in repudiation. The aggregate of the issues amounted to no less than the enormous and unthinkable sum of $9,500,000,000 ($9.5 trillion), and in the middle of 1797 when public repudiation took place, there was no less than $4,200,000,000 in face value of assignats and mandats (assign & mandate) outstanding; the loss, as always, falling mostly upon the poor and those without understanding.