Bitcoin Crash Not Over, Crypto Gamblers Prepare for Spike Down to $5,000

Bitcoin Crash Not Over, Crypto Gamblers Prepare for Spike Down to $5,000 By: Nadeem Walayat – Market Oracle

The crypto gamblers have had a wild ride during during 2017 where early year bets on Bitcoin at sub $2000 for the first 4 months of the year convert into a $20k Mid December bubble peak! Whilst I had no interest in bitcoin or any other of the crypto’s, I did pay some attention to its rise later in the year because so many people kept asking me how to buy, hold and trade bitcoins, and later still I kept being asked when they should sell, right upto the day bitcoin peaked at $20k!

And then came the inevitable crash to 10k, with the bitcoin as of writing recovering to trade at USD 13,300.

In the run up to $20k, many bitcoin investors / gamblers would ask me online and in real life “when they should sell their bitcoin holdings” and my reply tended to be that I’ve not been interested in bitcoin for several years, it’s just a gamble, there’s nothing backing it, and there is a high risk your bitcoins will be stolen right from your exchange accounts as has happened several times over the past decade, in fact I warned about such practices near 4 years ago of how bitcoin exchange scams tend to work.

Bitcoin Exchanges are a Ponzi Scam

The bitcoin exchanges have been busy distancing themselves from MTGox as if they are something different, more trustworthy, when the truth is they are the SAME – NO DIFFERENT!

In fact you are all being duped for they are not really exchanges at all! They are NOT akin to the stock exchange or commodities exchange but just websites that some techies set up that may have started out honest but greed will get the better of them just as it did with MTGox because as MTGox illustrated the prices being quoted are meaningless, there is no volume!

Unregulated Bitcoin exchanges are the natural consequence of the crypto currency scams for their primary purpose is to entice new entrants to buy bitcoins that the exchanges say they hold. How do they achieve this ? They do it by producing fancy trading graphs that show the price of bitcoins as rising and being high which encourages the fools to send the exchanges their hard earned money that they will never see again!

This is what the exchanges do, they get fools to send them money for bitcoins that allegedly NEVER existed, this is why when MTGox went bust it stated that some 800,000 bitcoins disappeared when the truth is that they probably never existed!

It is as I warned several months ago a PONZI SCAM! The exchanges pay out those selling / transferring their bitcoins out with money from new investors as long as new investors are greater than those exiting the ponzi scam continues.

The bitcoin exchanges make it very easy to BUY bitcoins with them but make it near impossible to withdraw, transfer out, as their primary purpose is to suck as many investors into their vortex as possible. So watch this space for whether or not the authorities in Japan charge MTGox with being a Ponzi Scam.

The Anatomy of CraptoCurrency Scams

Take this as a concise guide as to how crypto-currency scams tend to work.

1. New crapto-coins craptocurrency is developed allowing the creator and his friends to easily mine approx 1/3rd of the total potential supply before going public.

2. Holders of crapto-coins agree to withhold their supply from the market before it goes public.

3. Start to promote the craptocurrency by handing out free crapto-coins to the media, with likes of Max Keiser at the top of the list to start pumping.

4. Crapto-coins start trading and immediately jump in price due to limited supply.

5. Illiquid crapto-coins have a high market capitalisation due to a high price and number of coins (not) in circulation which encourages more media exposure and interest.

6. Many fools jump on the bandwagon buying expensive hardware to mine crapto-coins given the high price per crapto-coins (over 90% of mined supply with-held from market).

7. Many websites appear that add the tag exchanges to them to give the air of authority that suck in entrants by producing graphs and data that gives the illusion of rising prices and volume of trading when in reality they are nothing more than Ponzi scams as they limit withdrawals.

8. As interest and prices continue to rise, the creator and his friends slowly offload supply onto the fools until the price crashes and the noobs have been bled dry or holdings vaporise MTGox style.

9. The crapto-coins hoarders wait for the dust to settle and noobs to be encouraged once more into buying as the price is stable and then repeat the dump and crash several times more.

That’s how Bitcoin and ALL craptocurrency scams work

So whilst I did not know when the current bitcoin bubble would burst, However burst it most definitely WILL do which was my warning to all those who had piled into the bubble this year, and that it could happen at any time and that when the bubble does burst the decline will be far more dramatic then the rise and so it was highly likely that they would lose 50% or more from wherever the Bitcoin price peaked as the following whatsapp conversation illustrates. 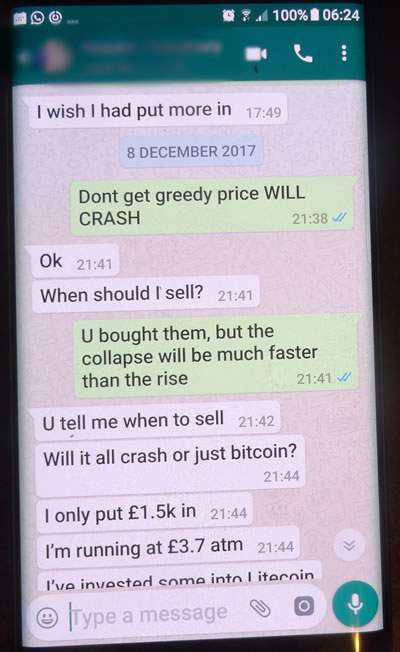 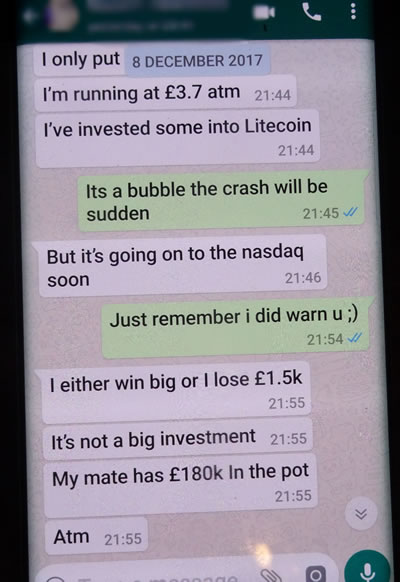 As for what bitcoin could do during 2018, well the price may have recovered by some 30% from the recent $10k low but I doubt that the decline is over, so it looks like bitcoin holders are currently in the calm before the next Bitcoin storm, another down leg to well below $10k, probably a spike down to $5k! Following which I would expect Bitcoin to be pretty much dead for the rest of the year, i.e. don’t expect a return to $20k anytime soon! So Bitcoin gamblers beware!

In terms of in-depth analysis, I may come back to bitcoin at some point during the year, but it’s never been a priority market in terms of analysis and trading. The only time I was really interested in bitcoin was during 2011/2012 when I was investigating mining bitcoins. At the time I estimated it would cost me about £5k to build a mining rig, and that it would likely churn out a couple of bitcoins per week. However I concluded at the time that I would not even be able to cover my electricity costs let alone recoup the £5k capital investment from the then sub $10 price, so the plan to mine was never implemented. Unfortunately I never seriously considered actually buying bitcoins because at that time the mindset of most participants was to MINE for FREE rather than to actually pay money to buy bitcoins. Which is probably why I remain reluctant to buy any crypto currency preferring to consider mining rather than buying. 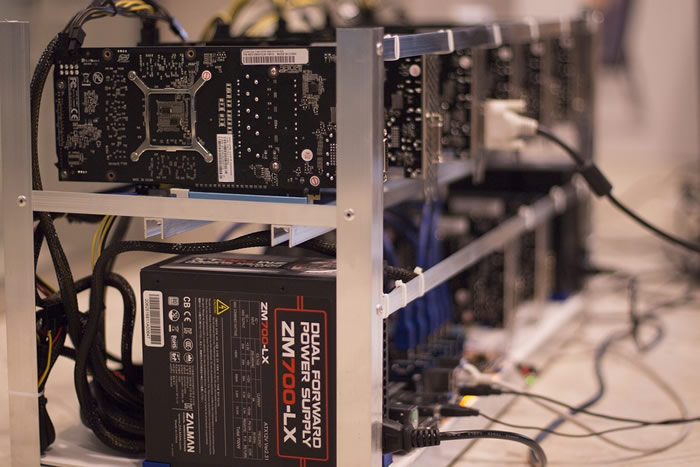 In terms of what I would do now if I wanted to take the time to get back into crypto’s. Well it would probably be to create my own crypto rather than mine any of the myriad of coins out there. In fact it now looks like its much easier to create ones own crypto currency today than it used to be to setup a bitcoin mining rig years ago! So many platforms trying to invite people to create their own crypto coins which obviously carries a price in terms of benefiting the platforms in exchange for ease of creating ones own crypto currency. Still that is what I would do. and you never know it may yet come to that.

Ensure you are subscribed to my always free newsletter and youtube channel for my forthcoming in-depth analysis and concluding detailed trend forecasts.