– Heads Need To Roll At The FBI And The DOJ Or The American People Will Have Absolute Proof We’re Simply Another Banana Republic, No Longer A ‘Nation Of Laws’

In the recent story over at USA Today that Steve Quayle recently linked to on his website they report that all of us are in for a rare treat next week as for the first time in more than 150 years, a super moon, a blue moon and a lunar eclipse will all be happening on January 31st. Also reporting that the last time such an event happened was all the way back in March of 1866 according to EarthSky.org, it’s not lost on videographer BPTV that the last this happened was soon after the Civil War ended.

The third in a series of 3 straight ‘super moons‘, the ‘super blue moon eclipse‘ as it’s being called will be visible in North America BEFORE sunrise on Wednesday morning January 31st according to the Earth Sky story. 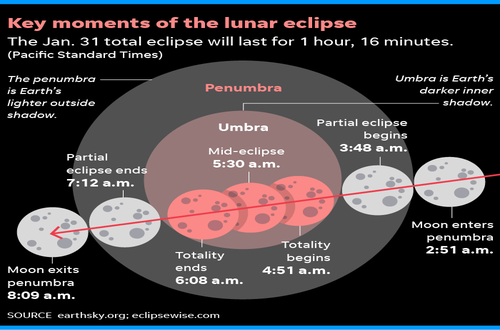 An while the ‘civil war coincidence’ may very well be just a coincidence, as videographer BPTV tells us within the 1st video below, with everything else that is now happening here in America with a corrupt justice department weaponized by Barack Obama against President Trump, these signs in the sky could hold prophetic significance. And as we see reported in much more detail below, ‘civil war’ in America may already be written in stone.

As we reported on ANP back on December 5th of 2017, should corrupt-to-the-core globalists think they’ll simply be able to overthrow the will of the American people and take down President Trump, they’ll likely have another thing coming.

As Infowars had warned back then, any real moves by the ‘deep state’ to illegally ‘remove‘ President Trump could trigger civil war in this country and as they warned us, such moves would nearly guarantee that the globalists will lose as they’re playing with fire in their attempts to take down our America-1st president, the US military and millions of heavily armed US patriots.

With what appears to be obvious treason committed against America by ‘enemies of America within’ who have been doing everything in their power to undermine President Trump and his ‘America-1st agenda’, might we soon witness ‘the next civil war’ breaking out upon US soil should the globalists do something incredibly stupid? 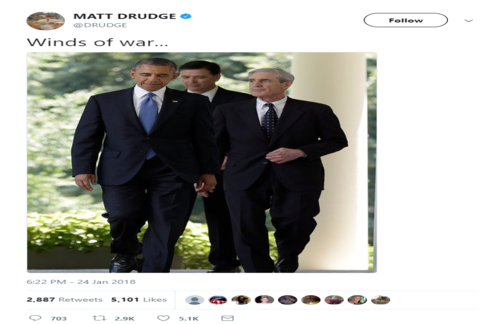 While we’ll continue to pray that such a war is never needed and never happens, the cryptic tweet recently sent out by Matt Drudgemight hint at such a thing as we see in the screenshot of that tweet above in which his only words are ‘Winds of War‘ with a photo of Barack Obama, James Comey and Robert Mueller

The new ‘axis of evil’ and enemies of America within? If these people are REALLY guilty of treason and the attempt to overthrow the legally elected government of President Donald Trump while completing the globalists goals of the destruction of America, there should be hell to pay. As Andrew Wallace reported over at News With Views back on December 22nd of 2017, President Trump needs to use the US military to disarm and disband the FBI for high treason.

Should Barack Obama, Hillary Clinton and the ‘secret society’ within the FBI and DOJ that were weaponized against President Trumpand the American people be charged with treason? Locked away forever? Please vote here and let us know what you think in the comment section below.

Should Barack Obama, Hillary Clinton, and the ‘Secret Society’ within the FBI and DOJ be locked up forever with key thrown away for treason?

With the nation of Sweden now preparing for civil war by preparing to deploy their army to so-called ‘Muslim no-go zones’ giving us a small taste of what may be ahead for parts of the European Union and certainly America should that worst case scenario come true, the fact that US Congressman Matt Gaetz from Florida is using sentences such as “America is in jeopardy” should tell most readers how far along the road towards peril America already is.

As Jeffrey T. Kuhner recently reported, “unless the Obamagate perpetrators do time, the republic is in peril.” Not only would these perps walking away free PROVE that there is no rule of law in America but such a result would also give us proof that nothing we see coming from the weaponized FBI and DOJ can be trusted if they sold their souls to ‘satan Hillary’.