The Perfect “Crisis Investment” for 2018

The Perfect “Crisis Investment” for 2018 by Nick Giambruno – International Man

Longtime readers know I’ve been pounding the table about uranium.

I think the price of uranium is about to soar, making it the perfect “crisis investment” for 2018.

Uranium is a beaten down and hated asset with massive profit potential. The crowd has left it for dead… just the sort of thing that piques my interest.

I first told Crisis Investing readers to add some exposure to uranium in November 2016. The timing was perfect. It marked the ultimate low for uranium prices (circled in red below). 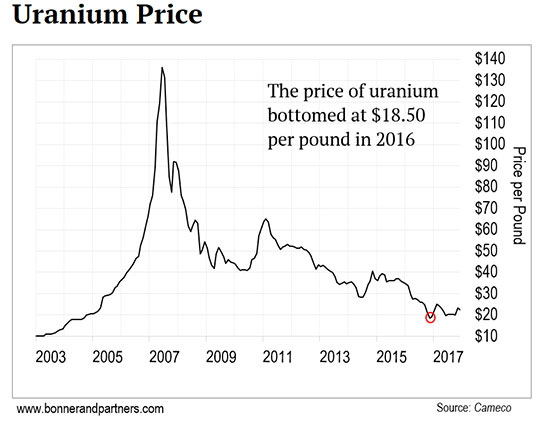 You’ll find all the details about the inevitable uranium bull market, including why it’s now imminent, below in a conversation with my friend and colleague Chris Lowe.

As many of you know, Chris is the editor of Bonner & Partners’ Inner Circle. His publication shares insights from Bill Bonner’s personal global network of analysts and investment experts.

Chris Lowe: We’ll get into the details of the two catalysts for higher uranium prices you’ve identified in a moment. First, can you catch readers up real quick on why you believe uranium prices are set to skyrocket?

Nick Giambruno: I’m a crisis investor. I take advantage of aberrations of mass psychology to pick up beaten-down assets for pennies on the dollar. And right now, it’s hard to think of a market where sentiment is worse than the uranium market.

As I’m sure you recall, in March 2011, Japan experienced a nuclear emergency at its Fukushima Daiichi power plant. After a 50-foot tsunami struck the plant, its nuclear reactor went into meltdown. This released radioactivity into the sea and air.

Afterward, Japan shut down all 54 of its nuclear power plants.

This ushered in a bear market in uranium. Demand collapsed. A supply glut followed. The price crashed from about $85 per pound to as low as $18. That’s far below the cost of production, which is about $60 (the red line in the next chart).

Today, uranium sells for about $24 per pound. That’s off its low. But it’s still well below the cost of production.

Uranium miners are losing money on every pound they produce and trying to make up for it in volume. 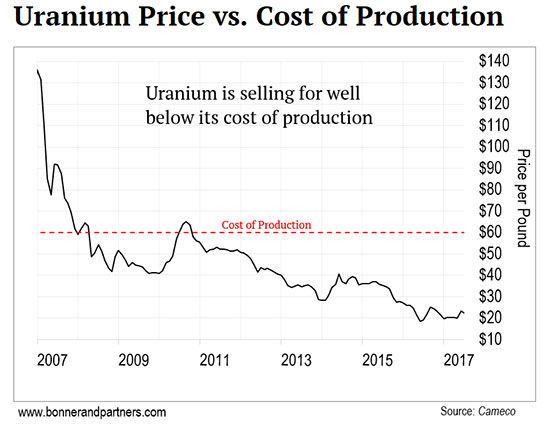 This situation can’t last. Either the price of uranium will rise to meet the cost of production… or the lights will go off.