TDC Note – This is the opposite of the presentation with Stefan Molyneux and Owen Benjamin that was published last night – this whole thing is working like a charm – get everyone confused and divided!! If you missed the Stefan and Owen presentation click here

The great sex panic movement that began in 2017 with the exposure of Hollywood mogul Harvey Weinstein’s sexual assault of actresses, was flawed from the very beginning when  multiple allegations of rape and sexual assault were rightly leveled against Weinstein, who had for decades used his position as a Hollywood mogul to physically and sexually abuse actresses, but others claiming “victimhood” without any assault or physical contact were all lumped into the same category.

When Harvey Weinstein was finally exposed as being a serial sexual assaulter, accusers started crawling out of the woodwork, the problem was some accused him of basically making a pass at them to which they said no and left, while others were raped and assaulted, which are actual crimes, yet website after website was lumping them all in under the term “victims.”

84 women are listed as “accusers,” yet a look at what those accusations are, shows a serious flaw in the way the whole #MeToo movement has been reported from the beginning.

Then the “Sh*tty Media Men” list was revealed, where names from top news organizations were put on a Google document, and again, accusations of actual rape were lumped in together with claims of “flirting” or a “weird lunch date,” and while many men from that list, those that were highlighted in red as committing an actual assault, have been exposed and suspended, or terminated from their employment, we were once again left seeing how what could have been a defining moment for real victims, was being abused by women that just wanted to be part of that “victim” movement.

By conflating “bad” behavior with “criminal” behavior, those jumping on the bandwagon to castigate any man on any of the lists were doing more damage to the #MeToo movement than good. Due process has been thrown out the window and any man accused of “sexual misconduct,” (some consider a hug to be inappropriate conduct) has been drug through the mud and are seeing their careers adversely affected.

I said the following in an article from November 2017:

The commonality is the majority of those accused are globalism supporters, and that “due process” is being thrown out the window, with “allegations” being enough to crucify the accused in public and costing people their careers, without the benefit of a court of law, or police reports or any type of proof of those allegations.

After Harvey Weinstein was exposed publicly, I was not the only female writer that was expressing these concerns, as New York Post columnist Andrea Peyser, wrote about her similar concerns:

It’s gone far enough. What started as a necessary mass-rejection of sexual harassment and assault is sliding into absurdity and irrelevance. A backlash is looming against the very people the spontaneous battle against sexual villainy was meant to help: powerless women and men.

The fight is being waged not with force, but with the rather bland Internet movement, #MeToo. The battle by hashtag conflates genuine sex crimes with mere childish behavior — blending the Harvey Weinsteins and Kevin Spaceys with the Al Frankens and George H.W. Bushes.

Those of us speaking up against the dangers of what has become more like a #MeToo lynch mob mentality rather than a legitimate attempt to address sexual harassment, did so not because we do not feel sympathy for actual victims, but because we realized that those victims would not see any justice if those reckless accusations that included nothing more than “flirting” or sexual overtures, or in the case which will be addressed below, an unpleasant date, became the standard of “sexual assault.” 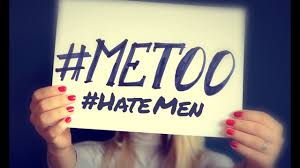 The latest to be accused of sexual assault is Aziz Ansari, who recent won a Golden Globe award for Best Actor for his role in Netflix’s Master of None, where he announced his support in the fight against sexual assault against women by wearing one of those little Time’s Up pins.