Neuroscientist Warns Humanity Is Racing Towards Becoming ‘AI-Induced Zombies’ – Is This Why FEMA, The CDC And The Pentagon Have Been Preparing For A ‘Zombie Apocalypse’? By Stefan Stanford – All News Pipeline

According to many, the title alone of this brand new story over at Daily Mail would qualify it to be ‘fake news’. Titled “AI brain chips will ‘evolve’ humanity into a ‘community of ZOMBIES’ who are indistinguishable from robots, expert claims”, their story is just the latest confirmation that America and the world are rushing full speed ahead into an ‘AI apocalypse’ that will forever change the face of our planet Earth and the nature of reality.

Over the past year+, ANP has published numerous stories warning of the potential dangers of AI  and specifically published a story back on October 1st after the horrific hurricane in Puerto Rico took down their power grid titled “Mind-Blowing Photographs From Puerto Rico Vindicate President Trump And Prove ‘Cell Phone Zombies’ Will Be Among The 90% Who Don’t Have A Chance When TEOTWAWKI Arrives” .

With that story alone helping to show just how close many Americans and people throughout the world already are to being ‘permanently attached to technology’, as we see in the Daily Mail story, a huge jump may soon be made. 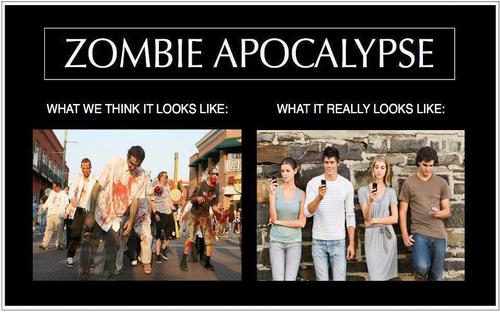 According to this May of 2016 story from Michael Snyder over at End of the American Dream, the average American smart-phone user already checks their cell phone an average of 35 times a day! Reporting back then that at least 50% of US teens are ‘addicted’ to their cell phones, back on January 13th Forbes reported America’s smart phone addiction has become an epidemic.

With Americans as a whole checking their smart phones 9 billion times every day and the convenience of having a computer in our pocket 24/7 radically changing how we interact with the world, how long will it be until human beings are simply merged into computers as the Daily Mail story hints, a horde of flesh and blood zombies, yet indistinguishable from robots?

In this new story from Fast Code Design that Steve Quayle linked to on his website Saturday they report tattoos are the rage at globalist-linked MIT these days with ink of tattoos being made of living, breathing cells, moving us one step closer to being permanently attached to our machines and tech. As he stated in an SQnote he left while linking to the story, “consider the genetic ramifications of non human cells, from ancient entities, being integrated into or onto your skin! ‘Trans dermal terminal transformation!'” 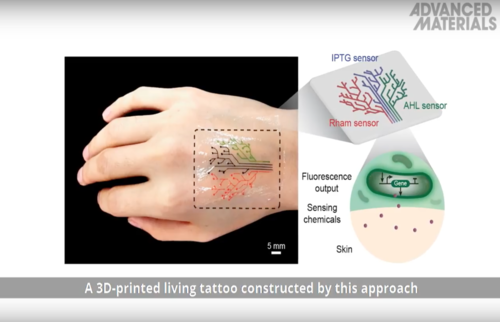 The fact that a huge percentage of Americans are are already nearly completely dependent upon their cell phones to function and feel lost if they don’t have it with them shows us the direction the human race is being herded and now, all of this might take huge jumps further in the same direction if this DM story is correct. From the Daily Mail story:

AI brain chips are set to ‘evolve’ humanity into a ‘community of zombies’, a prominent neuroscientist has claimed.

Those implanting AI into their mind risk merging with machines to the point that humans and androids are indistinguishable from one another, the expert said.