Are We Witnessing The Biggest Sting Operation In History?

Are We Witnessing The Biggest Sting Operation In History? ‘Sewer Rats’ Are Panicked – A Look At The Bigger Picture Shows Just How Fast The Dominoes Are Falling By Susan Duclos – All News PipeLine

In a new report from The Hill about how Congress is reeling from the sexual harassment deluge, which details how Congressional leaders are conflicted and dealing with each new allegation about multiple members on a case-by-case basis, attempting to decide which newly exposed member should be asked to resign, balancing that with the need to offer due process and how to move forward, and how everyone in Congress is panicked and wondering who is next to be exposed, but it is towards the middle of the article we see how deep the rot is and how many “sewer rats” there truly are walking the halls of Congress.

The three bombshell resignations in a single week — Conyers, Franken and Franks — have created a panicked atmosphere on Capitol Hill. Rumors are running rampant. The latest ricocheting around the Capitol is that a major national news outlet will publish a list of 20 to 30 lawmakers accused of harassment in the coming days. One GOP source said the listcould refer to secret Congressional Office of Compliance records of lawmakers who’ve privately settled sexual harassment claims in recent decades.

This past week we saw the announced resignations of three members of Congress over sexual harassment charges, allegations of inappropriate behavior, and paid settlements to hide sexual harassment. Democratic Senator Al Franken resigned after members of his party demanded it over groping women, Democratic Representative John Conyers after reports exposed him for paying out hefty settlements over sexual harassment claims, and Republican Representative Trent Franks who was about to be investigated by the House Ethics Committee for conversations with two female staffers in regards to becoming surrogates for he and his wife due to fertility issues.

In order to understand how massive a problem harassment claims in Congress truly are, the chart below, compiled by the Congressional Office of Compliance, released on November 16, 2017, showing the amount of money issued in settlements from 1997 to the date of the report in 2017, offers insight into how much taxpayer money goes towards secretly pay off the accusers. 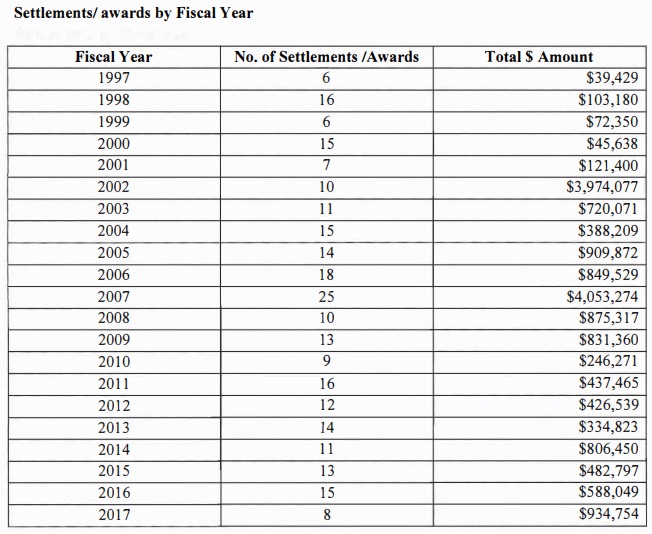 The problem with that report and the chart is it does not inform the public of how many of those settlements were for sexual harassment claims, or who the accused is, or the accuser, and in fact it is not only the public that is unaware as we see a report from December 7, 2017, in USA Today, that even members of Congress cannot obtain that information from the Office of Compliance, because that information is “strictly confidential.”

The once-sleepy Office of Compliance, which handles congressional labor and employment disputes, has no power to investigate sexual harassment complaints or enforce settlements. And it operates under a cloak of confidentiality that shields both accusers and the accused alike.

“So we’re not getting anything?” Rep. Susan Brooks, R-Ind., asked at a House Administration Committee hearing on sexual harassment in Congress Thursday.

Brooks’ question came after she asked the compliance office to provide her with detailed information about sexual harassment claims made against House members or their staffs.

The compliance office provided this answer by letter on Thursday: “All counseling and mediation conducted by the Office of Compliance is ‘strictly confidential’ and all administrative proceedings and deliberations are ‘confidential’.”

Susan Tsui Grundmann, executive director of the compliance office, said she could only release information if a case had gone to a hearing officer and if the complainant had been consulted. Many cases are settled before they reach the hearing stage.

“The law doesn’t allow us to release anything to your committee,” Grundmann told Brooks on Thursday. Brooks participated in Thursday’s hearing because she is the chairwoman of the House Ethics Committee, which could investigate sexual harassment allegations if it had the names of accused lawmakers’ offices.

Let me get this straight. Congress has managed to build laws into their own system which prevents their own ethics committee from investigating settlements that have been paid out for members accused of sexual harassment. A special law to cover up the cover ups themselves? 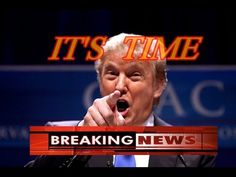 THIS MAY BE THE BIGGEST STING OPERATION IN HISTORY

Now lets take a step back for a moment and take a look at the bigger picture and a series of events that have occurred since President Donald Trump took office.

In Hollywood, celebrity after celebrity became embroiled in sexual scandals after Harvey Weinstein was exposed as a serial sexual harasser who had paid out millions in settlements, from rape to sexual assault, to molestation claims, as we continue to watch one domino tumble after another.