Salvator Mundi, said to be by Leonardo da Vinci, is the world’s most expensive painting.

Last Wednesday, at auction, each square inch was valued at nearly $1 million – including the bummed-up, restored, and damaged parts.

The painting may not be da Vinci’s work. Or perhaps, since it has been so heavily doctored up, little remains of his work. And whoever’s work it was must have been having a bad day.

And yet, it sold for over $450 million (including auction-house charges) – a lot of money for such a depressing work of art. 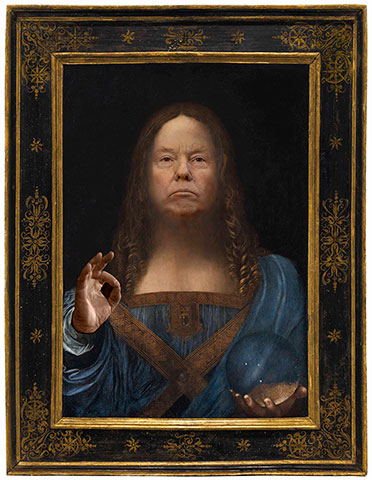 The question on the table: Why?

But since we don’t know the answer to that question, we’ll answer another one: How come so many people have so much money?

Made in the Middle

Though billed as a “middle-class tax cut,” the middle class gets almost nothing from the proposed plan.

Instead, almost all the benefits go to: (1) business owners, and (2) the rich.

And since the feds are unwilling to cut spending, the middle class ends up with about $2.2 trillion of extra debt, which it will have to reckon with eventually.

We bring up the tax cut because we think it helps explain the painting. Not for nothing are Republicans and the modern Salvator Himself, Donald J. Trump, setting up the middle class for a huge bamboozle.

A train ride we took on Monday – the Acela Express from Baltimore to New York – was subsidized by taxpayers from all over the country.

In between is nothing but poverty and dereliction. There are factories that last made a product in the ’50s. There are workers’ houses almost unchanged in half a century. There are abandoned warehouses… wrecked cars… junk steel… and burly men in orange vests working with machines.

The middle is where real work was done and real things were made, shipped, and distributed; it shows few signs of growth or prosperity.

It is as though a sausage had been squeezed in the middle, driving the rich meat to the ends. In between is lean… and greasy.

Every crime scene has many fingerprints on it.

Bill Bonner founded Agora Inc. in 1978. Since then, it has grown into one of the largest independent newsletter publishing companies in the world. Bill also co-wrote two New York Times bestselling books, Financial Reckoning Day and Empire of Debt, In his latest book, Hormegeddon, Bill describes what happens when you get too much of a good thing in the sphere of public policy, economics and business. This new newsletter is unlike anything else published in America today. Now in this industry, Bill Bonner has agreed to share his secrets and insights every month. It’s like having a super-wealthy uncle share his best ideas, insights and wisdom about business, relationships, investments, trends, developments, ideas and more.