Frankly put: retirement is now a myth for the majority

The Origins Of The Retirement Plan

Back during the Revolutionary War, the Continental Congress promised a monthly lifetime income to soldiers who fought and survived the conflict. This guaranteed income stream, called a “pension”, was again offered to soldiers in the Civil War and every American war since.

Since then, similar pension promises funded from public coffers expanded to cover retirees from other branches of government. States and cities followed suit — extending pensions to all sorts of municipal workers ranging from policemen to politicians, teachers to trash collectors.

A pension is what’s referred to as a defined benefit plan. The payout promised a worker upon retirement is guaranteed up front according to a formula, typically dependent on salary size and years of employment.

Understandably, workers appreciated the security and dependability offered by pensions. So, as a means to attract skilled talent, the private sector started offering them, too.

The first corporate pension was offered by the American Express Company in 1875. By the 1960s, half of all employees in the private sector were covered by a pension plan.

Off-loading Of Retirement Risk By Corporations

Once pensions had become commonplace, they were much less effective as an incentive to lure top talent. They started to feel like burdensome cost centers to companies.

As America’s corporations grew and their veteran employees started hitting retirement age, the amount of funding required to meet current and future pension funding obligations became huge. And it kept growing. Remember, the Baby Boomer generation, the largest ever by far in US history, was just entering the workforce by the 1960s.

Companies were eager to get this expanding liability off of their backs. And the more poorly-capitalized firms started defaulting on their pensions, stiffing those who had loyally worked for them.

So, it’s little surprise that the 1970s and ’80s saw the introduction of personal retirement savings plans. The Individual Retirement Arrangement (IRA) was formed by the Employee Retirement Income Security Act (ERISA) in 1974. And the first 401k plan was created in 1980.

These savings vehicles are defined contribution plans. The future payout of the plan is variable (i.e., unknown today), and will be largely a function of how much of their income the worker directs into the fund over their career, as well as the market return on the fund’s investments.

Touted as a revolutionary improvement for the worker, these plans promised to give the individual power over his/her own financial destiny. No longer would it be dictated by their employer.

Your company doesn’t offer a pension? No worries: open an IRA and create your own personal pension fund.

Afraid your employer might mismanage your pension fund? A 401k removes that risk. You decide how your retirement money is invested.

Want to retire sooner? Just increase the percent of your annual income contributions.

All this sounded pretty good to workers. But it sounded GREAT to their employers.

Why? Because it transferred the burden of retirement funding away from the company and onto its employees. It allowed for the removal of a massive and fast-growing liability off of the corporate balance sheet, and materially improved the outlook for future earnings and cash flow.

As you would expect given this, corporate America moved swiftly over the next several decades to cap pension participation and transition to defined contribution plans.

The table below shows how vigorously pensions (green) have disappeared since the introduction of IRAs and 401ks (red): 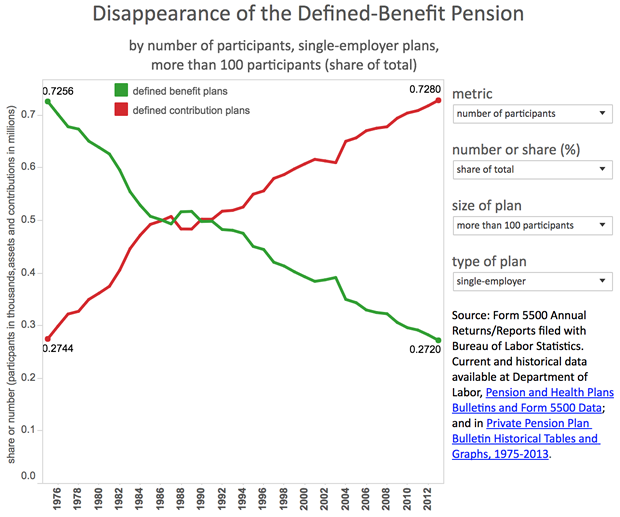 So, to recap: 40 years ago, a grand experiment was embarked upon. One that promised US workers: Using these new defined contribution vehicles, you’ll be better off when you reach retirement age.

Which raises a simple but very important question: How have things worked out?

Three decades later, what we’re realizing is that this shift from dedicated-contribution pension plans to voluntary private savings was a grand experiment with no assurances. Corporations definitely benefited, as they could redeploy capital to expansion or bottom line profits. But employees? The data certainly seems to show that the experiment did not take human nature into account enough – specifically, the fact that just because people have the option to save money for later use doesn’t mean that they actually will.

First off, not every American worker (by far) is offered a 401k or similar retirement plan through work. But of those that are, 21% choose not to participate (source).

As a result, 1 in 4 of those aged 45-64 and 22% of those 65+ have $0 in retirement savings (source). Forty-nine percent of American adults of all ages aren’t saving anything for retirement.

In 2016, the Economic Policy Institute published an excellent chartbook titled The State Of American Retirement (for those inclined to review the full set of charts on their website, it’s well worth the time). The EPI’s main conclusion from their analysis is that the switchover of the US workforce from defined-benefit pension plans to self-directed retirement savings vehicles (e..g, 401Ks and IRAs) has resulted in a sizeable drop in retirement preparedness. Retirement wealth has not grown fast enough to keep pace with our aging population.

The stats illustrated by the EPI’s charts are frightening on a mean, or average, level. For instance, for all workers 32-61, the average amount saved for retirement is less than $100,000. That’s not much to live on in the last decades of your twilight years. And that average savings is actually lower than it was back in 2007, showing that households have still yet to fully recover the wealth lost during the Great Recession.

But mean numbers are skewed by the outliers. In this case, the multi-$million households are bringing up the average pretty dramatically, making things look better than they really are. It’s when we look at the median figures that things get truly scary: 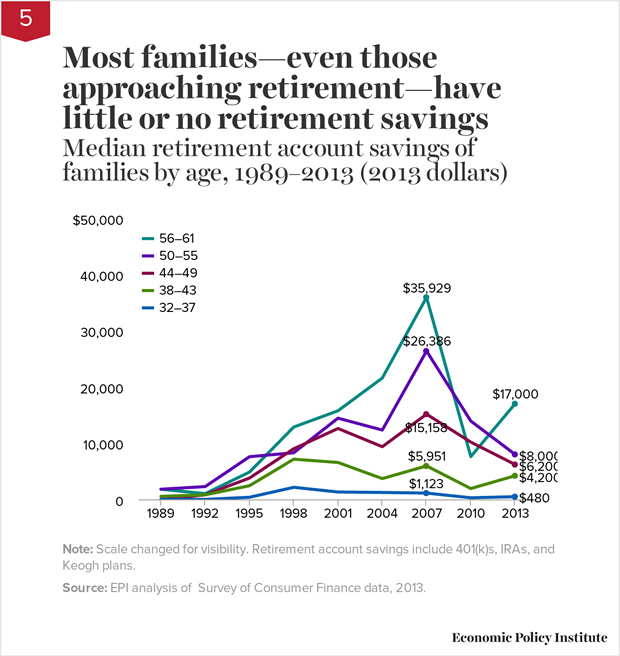 Nearly half of families have no retirement account savings at all. That makes median (50th percentile) values low for all age groups, ranging from $480 for families in their mid-30s to $17,000 for families approaching retirement in 2013. For most age groups, median account balances in 2013 were less than half their pre-recession peak and lower than at the start of the new millennium.

The 50th percentile household aged 56-61 has only $17,000 to retire on. That’s dangerously close to the Federal poverty level income for a family of two for just a single year.

Most planners advise saving enough before retirement to maintain annual living expenses at about 70-80% of what they were during one’s income-earning years. Medicare out-of-pocket costs alone are expected to be between $240,000 and $430,000 over retirement for a 65-year-old couple retiring today.

The gap between retirement savings and living costs in one’s later years is pretty staggering:

As for Medicare, the out-of-pocket costs could easily soar over retirement. The Wall Street Journal reports that the current estimate of Medicare’s unfunded liability now tops $42 Trillion. Such a mind-boggling gap makes it highly likely that current retirees will not receive all of the entitlements they are being promised.

And the denial being shown by baby boomers entering retirement is frightening. Many simply plan to work longer before retiring, with a growing percentage saying they plan to work “forever”.

But the data shows that declining health gives older Americans no choice but to leave the work force eventually, whether they want to or not. Years of surveys by the Employment Benefit Research Institute show that fully half of current retirees had to leave the work force sooner than desired due to health problems, disability, or layoffs.

Add to this the nefarious impact of the Federal Reserve’s prolonged 0% interest rate policy, which has made it extremely hard for retirees with fixed-income investments to generate a meaningful income from them.

The number of Americans aged 65 years and older is projected to more than double in the next 40 years: 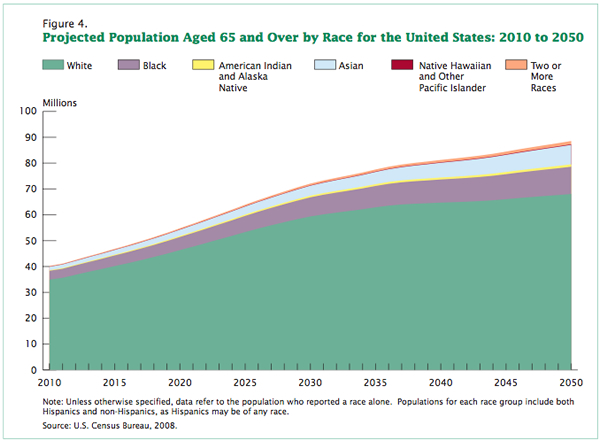 Will the remaining body of active workers be able to support this tsunami of underfunded seniors? Don’t bet on it.

Especially since their retirement savings prospects are even more dim. With long-stagnant real wages and punishing price inflation in the cost of living, Generation X and Millennials are hard-pressed to put money away for their twilight years: 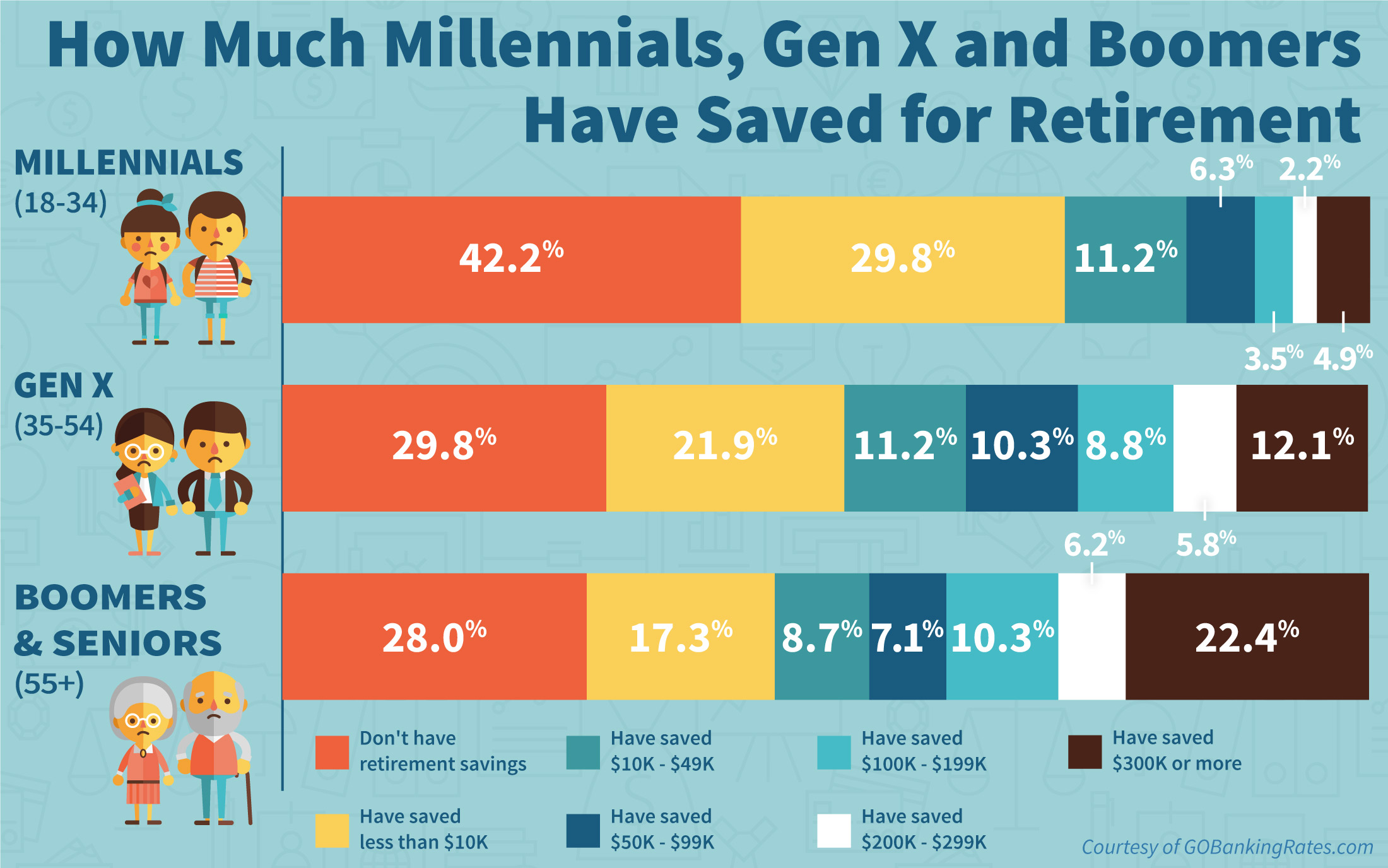 And for those “lucky” folks expecting to enjoy a public pension, there’s a lot of uncertainty as to whether they’re going to receive all they’ve been promised.

Due to underfunded contributions, years of portfolio under-performance due to the Federal Reserve’s 0% interest rate policy, poor fund management, and other reasons, many of the federal and state pensions are woefully under-captialized. The below chart from former Dallas Fed advisor Danielle DiMartino-Booth shows how the total sum of unfunded public pension obligations exploded from $292 billion in 2007 to $1.9 trillion by the end of 2016: 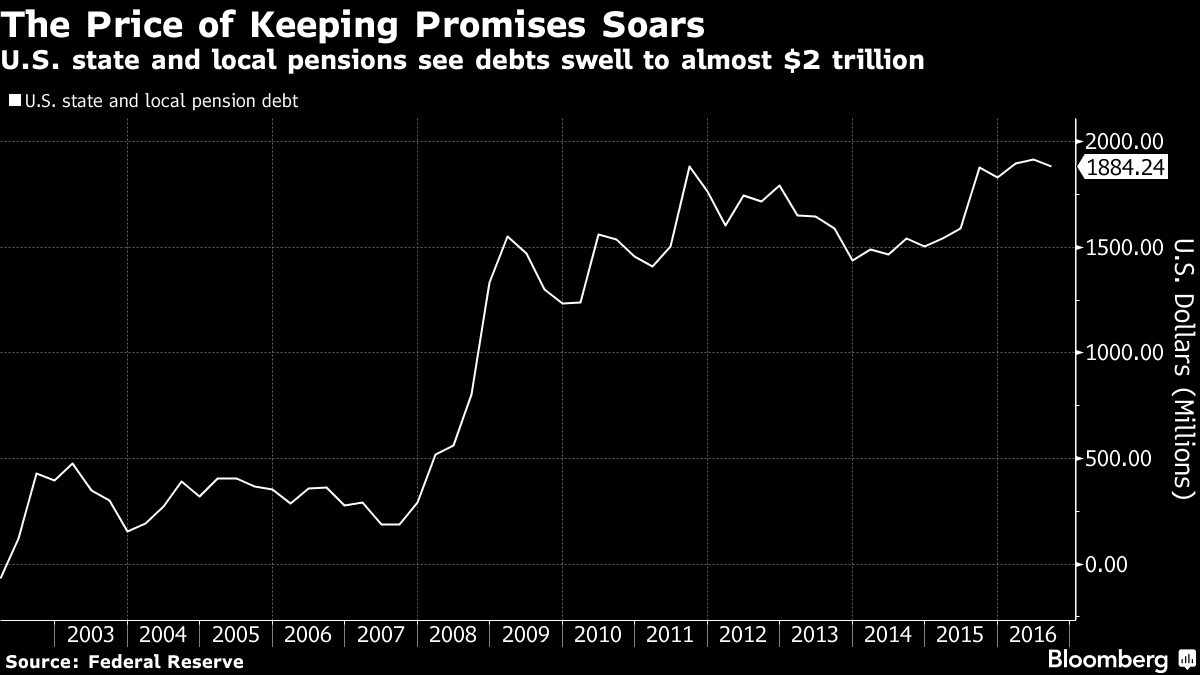 And the daily headlines of failing state and local pension funds (Illinois, Kentucky, New Jersey, Dallas, Providence — to name but a few) show that the problem is metastasizing across the nation at an accelerating rate.

The bottom line when it comes to retirement is that you’re on your own. The vehicles and the promises you’ve been given are proving woefully insufficient to fund the “retirement” dream you’ve been sold your whole life.

But the good news is that the dream is still attainable. There are strategies and behaviors that, if adopted now, will make it much more likely for you to be able to afford to retire — and in a way you can enjoy.

In Part 2: Success Strategies For Retirement, we detail out these best practices for a solvent retirement, including providing 14 specific action steps you can start taking right now in your life that will materially improve your odds of enjoying your later years with grace.

For far too many Americans, “retirement” will remain a perpetual myth. Don’t let that happen to you.