While most recent Antifa reports have covered the planned nationwide Antifa protests scheduled for November 4, 2017, what we have not seen much coverage about is that on Saturday, October 28, 2017, Antifa has been organizing to to show up en masse in two different cities in Tennessee,  to protest a set of “White Lives Matter” rallies, with the stated goal as shown in the image below, via TN local news, to “Crack some Nazi skulls.”

According to the White Lives Matter events page at Occidental Dissent, The Nationalist Front will be hosting two demonstrations in Middle Tennessee on Saturday, October 28th. The first is scheduled to start in Shelbyville, TN at 10:00 am, slated to continue until 1:00 pm before traveling a short distance to Murfreesboro to start that rally at 1:30 pm, scheduled to last until 4:00 pm.

Description: The purpose of the White Lives Matter rallies will be to protest the ongoing problem of refugee resettlement in Middle Tennessee and to draw attention to the recent Emanuel Samson church shooting in Antioch and the way this explosive story has been buried by the national media. The tragic events in Antioch, which was retaliation for the Dylann Roof shooting in Charleston, illustrated that the national media only cares about pushing its false narrative of White racism and black victimhood.

We also want to express our anger at the Trump administration which recently took Sudan off the travel ban list the day of the Antioch church shooting. It also followed up by announcing an “America First Refugee Program” which means dumping 45,000 refugees a year in places like Middle Tennessee while not saying a word when a Sudanese refugee who failed to assimilate goes on a rampage. The Trump administration has also failed to build the border wall and is working with Nancy Pelosi and Chuck Schumer to pass a new version of the DREAM Act amnesty. Finally, we want to discuss the state of our movement and how we will move forward from here. 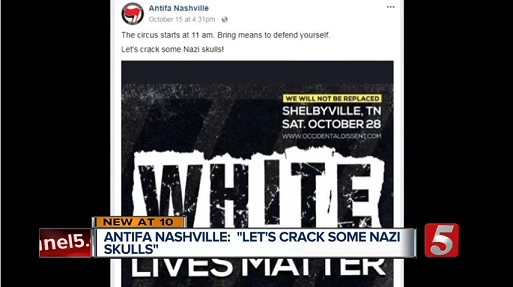 Objectives: Draw national attention to the Emanuel Samson church shooting. Foster greater unity and cohesion within our own movement. Turn the page on Charlottesville.

Bring: We do not expect the White Lives Matter rallies in Shelbyville or Murfreesboro to become another Charlottesville. That’s not in our interest. It certainly isn’t in the interest of Shelbyville or Murfreesboro. We desire to hold two peaceful demonstrations. The Nationalist Front chose to hold this event in Middle Tennessee in order to AVOID any type of clash with violent Antifa protesters. We expect them to be restrained and separated as they were in Pikeville, KY.

Do Not Bring: Shelbyville and Murfreesboro have provided clarification of which items you are not allowed to bring to the #WhiteLivesMatter demonstrations. These include masks, firearms, knives or any type of weapon as well as flag poles, sticks and clubs. Read through the list carefully and be prepared to be searched at designated entry points.

MultipleAntifa groups have organized to counter-protest as well, while law enforcement in Tennessee are preparing to try to keep the peace, praying events do not get out of control.