In Defense Of Cash: Why We Should Bring Back The $500 Note And Other Big Bills

In Defense Of Cash: Why We Should Bring Back The $500 Note And Other Big Bills by Jay Zagorsky – Activist Post

A world without cash seems wonderful at first glance since it is convenient and fast. You don’t need to withdraw dollars or euros ahead of time. You don’t have to worry about money being lost or stolen. Paying for things with your phone is a breeze.

Many countries around the world are steadily shifting away from cash. Canada, the United Kingdom and Sweden have already largely embraced a cashless society. The U.S. is also steadily making the move, with people holding smaller amounts of cash.

However, the recent string of natural disasters and security breaches at major financial entities exposes a huge flaw in this trend: When the power goes out, telephone lines shut down or account information is stolen, it is impossible to use ATMs, credit or debit cards or mobile payments – no matter how rich you are.

In other words, giving up cash increases the chance of the kind of economic catastrophe that results when people can no longer easily trade for the goods they need and want. The solution to this national security issue is simple: bring back the currently maligned large denomination bills like the $500, which was discontinued in 1969. 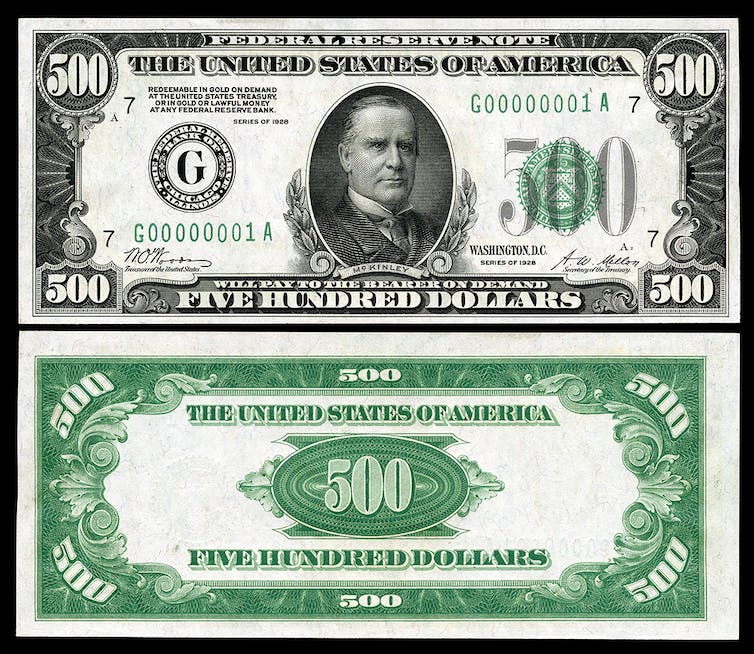 President William McKinley was the last face to adorn the $500 note before it was discontinued in 1969.National Numismatic Collection, National Museum of American History

Recently, some prominent economists have suggested countries should move to a cashless society, with actions like eliminating the $100 bill.

If only small bills are allowed, then people making illegal payments need briefcases stacked with huge numbers of small denomination bills like $5 and $10s. This is much more difficult than discreetly using a small envelope filled with a few very high value notes.

Some countries have eliminated high value notes to reduce corruption. India in 2016 eliminated the 500-rupee(about $7.69) and 1,000-rupee notes for this reason before bringing in new denominations.

Larry Summers, an economist who was also president of Harvard and a Treasury secretary, also argued for eliminating both the $100 bill and €500 note (about $592) from circulation. A few months after his recommendation, the European Central Bank decided to stop issuing the large bills by the end of 2018 in an attempt to reduce corruption and terrorism. The Wall Street Journalreports, however, that there is no move yet to kill off Ben Franklin and his $100 note.

Risks of a cashless society

First, there always has to be electricity to power the computers and network storage. Second, communication between all parts of the network needs to be available. Finally, the network has to be secure, so only authorized money transactions occur.

All three of these fundamental requirements for a cashless society have broken down recently in dramatic fashion.

Hurricanes Irma and Maria devastated Puerto Rico in September. Many weeks later, less than 20 percent of the electricity has been restored, and no one really knows when the rest of the island will regain power. Because the electricity has been cut off to almost all cities and towns, the entire island has reverted to an economy based on cash, which is in very short supply. Credit and debit cards can’t be used because there is no way to process transactions and no power to run credit card terminals and readers.

Wildfires are currently ravaging Northern California. One of the problems caused by the fires is that the flames have destroyed numerous cell towers. When the phone network goes down, it is impossible both to reach loved ones and for credit and debit card readers to connect to the network. Without a connection, those without cash can’t buy fuel to flee, pay hotels for temporary shelter or purchase food. 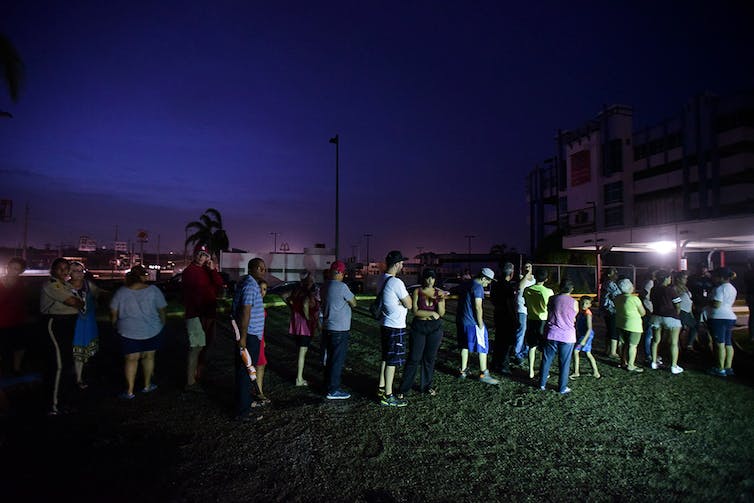 The devastation in Puerto Rico wrought by recent hurricanes shows what can happen when a society is too reliant on electronic money and cash is in short supply. AP Photo/Carlos Giusti

Finally, we’ve recently learned how unsecure the network that processes transactions and protects our financial data has become. As most people do not possess piles of coins or bills anymore, our money consists of entries in bank and brokerage databases. If those entries change or disappear, people’s wealth vanishes, too.

The Pentagon is trying to ensure that cyberattacks cannot disrupt the financial system. Nevertheless, the capabilities of rogue actors, like North Korea, are increasing. It has even been implicated in stealing millions from a Taiwanese bank.

The recent breach of Equifax’s database and hacks at numerous other financial institutions show security is a major problem.

These events show just how precarious the three pillars of a cashless society are and how quickly they can falter. When this network breaks down, people who do not have cash are forced to barter. Bartering is devastating for an economy, in part because it needs a “double coincidence of wants.”

A double coincidence means your desire to trade something has to happen or coincide at the exact same moment someone else wants what you are offering – and has something you want as well. Moreover, few people in a modern economy own many goods or can provide services that are useful for bartering. When a natural disaster or war strikes, no one wants to barter for collections of antique dolls, baseball cards or china. 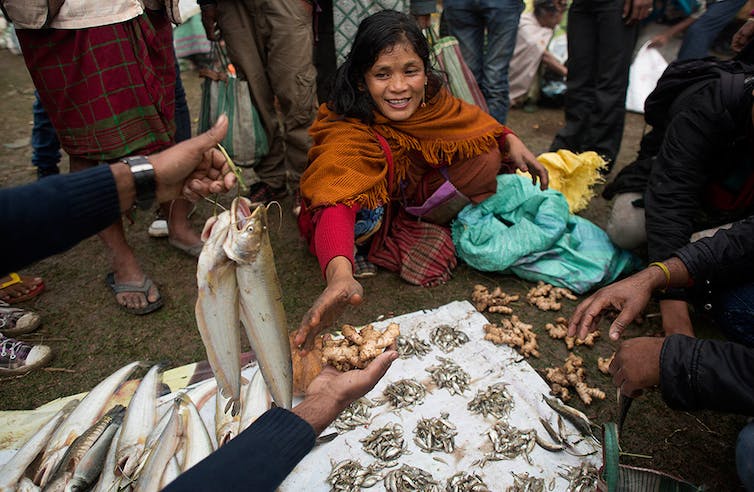 When it works, a cashless society is wonderful. I enjoy not having to carry or worry about cash when I travel. The networks, when they work, are amazing. I have checked my bank balance on the edge of a desert in Botswana using an ATM and paid my taxes from a cell phone in Tokyo.

However, a cashless society means a country’s economy is vulnerable to anything that causes a long-term disruption in power, communications or security. And those threats are rising. The number of natural disasters striking the U.S. is increasing, and wars are no longer being fought using just conventional weapons. Today the computers that control a country are playing a much bigger role.

Shifting to a cashless economy makes a country more vulnerable to both disasters and wars. National defense is not only about boots, guns and bullets. It is about keeping the economy running at all times. Cash can ensure the economy won’t collapse in an emergency, since people with cash are still able to buy and sell.

The solution is simple. Governments need to bring back higher value notes like $500 bills. There clearly are negatives to bringing back large bills, which make it easier for crime and corruption to flourish. I believe, however, that the positives outweigh the negatives, particularly the usefulness of cash during disasters.

Whether governments bring back larger bills or not, store some cash at home in case of emergency. When disaster is about to strike and it is time to flee, having cash in your wallet or purse can make the difference. Cash gives you purchasing power when everything else fails.

This article was originally published on The Conversation. Read the original article.