John McCain: An American Traitor for the Ages

John McCain: An American Traitor for the Ages by Dave Hodges – The Common Sense Show

As a relatively young man in 1980, I had just finished reading the book, Trilaterals Over Washington,authored by Patrick Wood and the late Anthony Sutton. In the book, I learned from extensive documentation, that America had been taken over by a small minority of wealthy elitists. I was shocked, angered and outraged that our elected officials were spitting in the face of the Constitution by allowing this to happen.

I began a search to find out more about what I had read in the Pat Wood’s book. In the days before the Internet, I was forced to use the old card catalogue system. I went to varous universities. I went to public libraries. I called the staffs of various member of Colorado’s congressional delegation. Through all my research, I found one, only ONE article that even mentioned the Trilateral Commission and it was the globalist mouthpiece, The Atlantic. This early New World Order rag stated that the organization was pro-human rights and that the creation of a new philosophy would benefit humanity because of the creation of “a more equitable and just world order”.  I was angy beyond belief. I realized that the America was screwed and at some future date, we were going to lose our country!

Can you imagine, in 1980, the reaction I got when I did my version of Paul Revereimitation “The Trilaterals are coming, the Trilaterals are coming”. My closest friends and my girlfriend had thought I had literally lost my mind. I was just getting started with my coaching and academic career. Some of my academic colleagues and graduate school professors accused me of being a “John Bircher”.  I did not even know what a John Bircher was, I just knew that at some future date that we were going to lose our country.

The Trilateral Commission and its first cousin, The Council on Foreign Relations were very secretive in those days and only “crazy people” talked about these organizations. I guess I was one of the early “conspiracy theorists”. During that time, most of my friends thought that I had lost my mind, and being on the verge of losing a very cute girlfriend, I chose to go back to sleep. Ironcially, in 2017, Pat Wood is my now friend and I am on a lot of naughty lists due to my advocacy for the restoration of the Constitution.

Today, events have really changed. Hillary Clinton campaigned, for the Presidency, in front of the Council of Foreign Relations back drop, repeatedly. 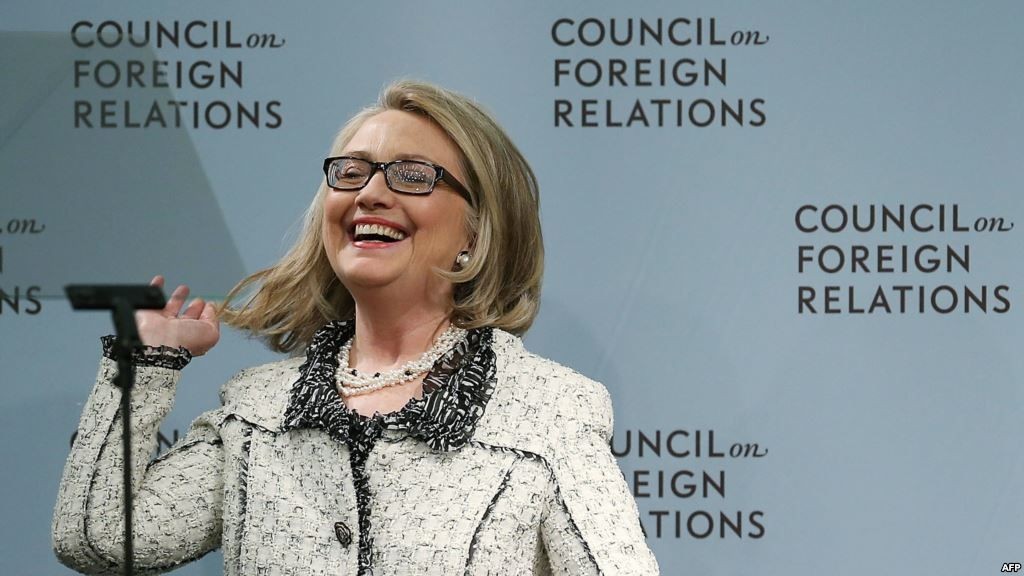 And she campaigned religiously under the watchful eye of the CFR. 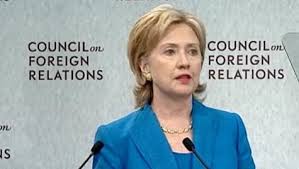 Under John McCain American Patriotism Is Dead: In your Face Globalism

“To fear the world we have organized and led for three-quarters of a century, to abandon the ideals we have advanced around the globe, to refuse the obligations of international leadership and our duty to remain ‘the last best hope of earth’ for the sake of some half-baked, spurious nationalism cooked up by people who would rather find scapegoats than solve problems, is as unpatriotic as an attachment to any other tired dogma of the past that Americans consigned to the ash heap of history,” McCain said. [Quoted by Breitbart]

THANK YOU JOHN MCCAIN FOR EXPOSING YOUR GLOBALIST AGENDA

John McCain is one of “them”. He is a self-admitted globalist who is working for the destruction of the American people and their country. By default, he is a disciple of globalist Ted Turner who told Audobon Magazine that the population of the earth needs to reduced by 95%. McCain supports giving away American sovereignty to international bodies whose goal is to advance globalism AT THE EXPENSE OF AMERICAN LIBERTIES, NATIONAL SECURITY AND JOBS.

In retrospect, this should not be surprising. McCain, along with the late Ted Kennedy co-sponsored the Central American Free Trade Agreement which gave away much of America’s sovereignty, jobs and allowed millions of illegal aliens, including ISIS and MS-13, to enter the United States with impunity.

The 21st Century of  Benedict Arnold

When John McCain was elected to the Senate by the people of Arizona, he placed his right hand on the Bible and swore to protect America from enemies both foreign and domestic. McCain has become that domestic enemy that he swore to protect the country from.

When Benedict Arnold committed his treason, he was trying to give away the plan for West Point. McCain is giving away the entire country. I ask you, who is worse?

Everyone from former Army psyop, Scott Bennett to Fox News has noted that Obama is and ahs been chummy with ISIS. In fact, in his role as the head of the Senate Intelligence Committee, McCain oversaw the illegal abandonment of American military equipment in Iraq in order that ISIS could confiscate this equipment. Federal law mandates that all American military equipment left behind in a theater of war be blown up. McCain et al actions were treasonous to say the least as this Senator fueled the rise of ISIS.

McCain supports free trade agreements that steal millions of American jobs. McCain supported the TPP which would have destroyed what’s left of the sovereignty in America. It is obvious that McCain hates America and Americans.

I was once at a town hall meeting in Mesa, AZ., when an elderly gentleman asked McCain “how is it that you work for me and you have better health care than I do?” McCain’s thuggish security team, who looked liked type-cast mafiaso thugs, very roughly threw the frail man out for asking the question as McCain mocked the man. At the same meeting, he was asked why he supported Agenda 21 policies and he stated “I have never heard of Agenda 21 policies”. I witnessed these events with my own eyes.

John McCain is owned by George Soros and sold out America to Soros’ open borders policy.

We should not be surprised that John McCain would disparage President Trump for being patriotic. McCain only has one loyalty and that is to himself.

By the way, Cindy McCain is NOT the original Mrs. McCain. Carol McCain, a former model, had a terrible car accident which left her disfigured when John McCain was in a North Vietnamese prison camp. Upon returning home, McCain quickly divorced Carol and married Cindy Hensley whose family launched John McCain’s political career. McCain has done to the country, what he did to Carol McCain. According the New York Times, the Hensley family had a “very rough and tumble background” with allegations of bootlegging and tax evasion. Cindy McCain’s business has been fraught with conflicts of interest. Her prenuptial agreement with John makes it diffiuclt to track the Senator’s finances to try and ascertain who is in his pockets.

I find it ironic that McCain, the buffoon, who finished third to the bottom of his class at the Naval Academy, was ever allowed to fly a fighter jet. A fighter jet that he crashed into other planes as he almost sunk his own ship during the Vietnam War. The irony is that the warship, John McCain, is in dry dock as I write these words for crashing into another ship as it was almost sunk.

Like Hillary Clinton, John McCain stands at the intersection of corrupt government and the Deep State, who John McCain faithfully serves. We do owe John McCain a  debt of gratitude. He has helped to expose the globalist agenda and their intentions toward the American people.