We have reported on how the tide is turning against Antifa and more recently on how their terrorist actions finally forced the mainstream media to start reporting on their violence, the same media who have been some of the biggest supporters and apologists for the Soros funded groups that call themselves “Antifa,” who use fascists tactics to suppress opinions and speech for political purposes while claiming to be “anti-Fascist.” 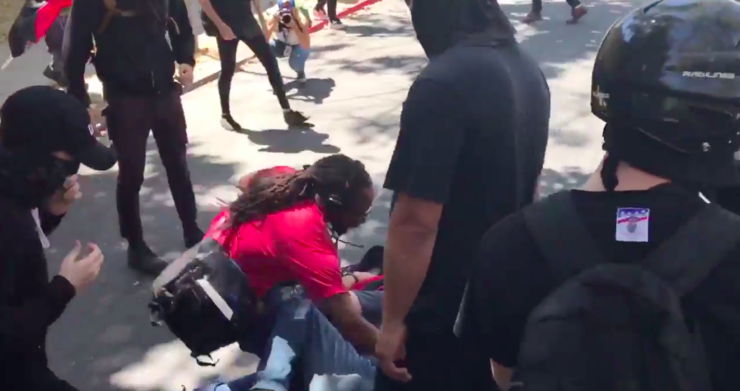 ANTIFA ‘UNMASKED’ – EXPOSING THEMSELVES FOR WHAT THEY TRULY ARE: DOMESTIC TERRORISTS

For over a year Independent Media has been exposing the violence, rioting, attacks against anyone that disagrees with their political ideology, and in that time the MSM and liberals have offered excuses, justifications, and actively attacked the victims of Antifa’s thuggery, until August 27, 2017, in Berkeley California, when horrifying images of multiple masked men in black, carrying sticks, beating a single man on the ground, punching and kicking him,  as another man, an African American, jumped on the victim, covering his body and protecting him from the brutally violent attack by Antifa members.

While covering Sunday’s “Rally Against Hate” in Berkeley, California, today, Reveal host Al Letson witnessed a man being attacked by a group of protesters. The man was balled up on the ground, fending off blows from several people. Letson, wearing a red T-shirt, jumped in front of the batterers, protecting the man from further injury.

“I was scared they were going to kill him,” Letson said. “So the only thing I could think was I wanted to get on top of him to protect him.”

While that was, by far, the most disturbing image that went viral, others caught on the 27th included mobs of masked thugs in black chasing individuals down the street, and attacking them as is discussed below, with short clips included in the coverage, but we ask readers to carefully note the Antifa supporter that starts speaking at the 40 second mark, as well as the sign behind her that says “NOVEMBER 4th IT BEGINS.”

First the sign: The ‘November 4 it begins sign” is the new promotional tool for a group called RefuseFascism, that are organizing nationwide terror attacks against Americans in all cities, calling up on supporters to “take to the streets and public squares in cities and towns across the country continuing day after day and night after night—not stopping—until our DEMAND is met: The Trump/Pence Regime Must Go!”

They are calling on the violent overthrow of the duly elected government.

Here is the image of the Antifa group member from the video above with the sign behind her. 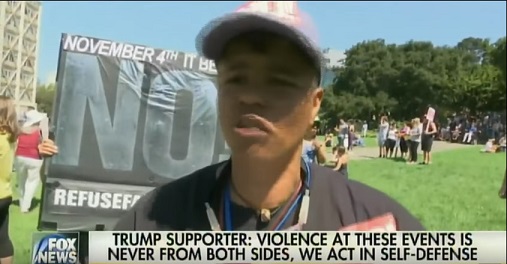 Here are the propaganda signs from RefuseFascism.org: 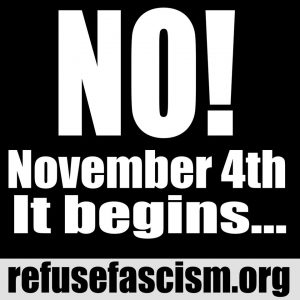 Here is another one being used by a different Antifa groups “The voice of the revolutionary communist party, USA.” 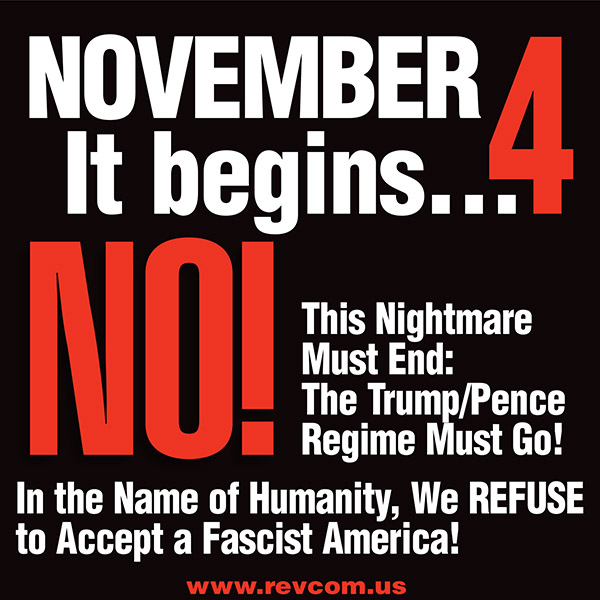 Read more about what to expect on November 4, 2017, in a previous ANP article titled “War: Antifa Plans Nationwide Terror Attacks For November 4, 2017 – Time To ‘Lock And Load’.”