After several weeks on the road talking to mortgage professionals and business owners, below is an update on the world of housing finance.  We hope to see all of the readers of The Institutional Risk Analyst in the mortgage business at the Americatalyst event in Austin, TX, next month.

The big picture on housing reflected in the mainstream media is one of caution, as illustrated in The Wall Street Journal. Borodovsky & Ramkumar ask the obvious question:  Are US homes overvalued? Short answer: Yes. Send your cards and letters to Janet Yellen c/o the Federal Open Market Committee in Washington.

As we’ve discussed in several forums over the past few years, home valuations are one of the clearest indicators of inflation in the US economy.  While members of the tenured world of economics somehow rationalize understating or ignoring the fact of double digit increases in home prices along the country’s affluent periphery, sure looks like asset price inflation to us.

WHY U.S. HOME PRICES ARE OVERVALUED

Inflation, just to review, is defined as too many dollars chasing too few goods, in this case bona fide investment opportunities.  A combination of slow household formation and low levels of new home construction are seen as the proximate cause of the housing price squeeze, but higher prices also limit the level of existing home sales.  Many long-time residents of high priced markets like CA and NY cannot move without leaving the community entirely. So they get a home equity line or reverse mortgage, and shelter in place, thereby reducing the stock of available homes.

Two key indicators that especially worry us in the world of credit is the falling cost of defaults and the widening gap between asset pricing and cash flow.  Credit metrics for bank-owned single-family and multifamily loans are showing very low default rates.  More, loss-given default (LGD) remains in negative territory for the latter, suggesting a steady supply of greater fools ready to buy busted multifamily property developments above par value.  We can’t wait for the FDIC quarterly data for Q2 2017 to be released next week as we expect these credit metrics to skew even further.

Single-family exposures are likewise showing very low default rates and LGDs at 30-year lows, again suggesting a significant asset price bubble in 1-4 family homes.  The fact that many of these properties are well under water in terms of what the property could fetch as a rental also seasons our view that we are in the midst of a Fed-induced investment mania.

For every seller in high priced states that finds current prices impossible to resist, there are several ready buyers. But the crowd of buyers is thinning. Charles Kindleberger wrote in his classic book, “Manias, Panics and Crashes,” in 1978:

One of the interesting facts about the mortgage sector in 2017 is that even though average prices have more than recovered from the 2008 financial crisis, much of the housing stock away from the desirable periphery has not really bounced.  This is yet another reason why existing home sales at a bit over a million properties annually have gone sideways for months.  The 600,000 or so new housing starts is half of the peak levels in 2005, but today’s level may actually be sustainable.

We had the opportunity to hear from our friend Marina Walsh of the Mortgage Bankers Association at the Fay Servicing round table in Chicago last week.  Mortgage applications have been running ahead of last year’s levels, yet overall volumes are declining because of the sharp drop in refinancing volumes.  We disagree with the MBA about the direction of benchmarks such as the 10-year Treasury bond.  They see 3.5% yields by next year, but we’re still liking the bull trade.  But even a yield below 2% will not breath significant life into the refi market.

Though prices in the residential home market remain positively frothy in coastal markets, profitability in the mortgage finance sector continues to drag.  Large banks earned a whole 15 basis points on mortgage origination in the most recent MBA data, while non-banks and smaller depositories fared much better at around 60-70bps.  But few players are really making money.

During our conversations over the past several weeks, we confirmed that the whole residential housing finance industry is suffering through some of the worst economic performance since the peak levels of 2012. The silent crisis in non-bank finance we described last year continues and, indeed, has intensified as origination margins have been squeezed by the market’s post-election gyrations.

Looking at the MBA data, if you subtract the effects of mortgage servicing rights (MSR) from pre-tax income, most of the industry is operating at a significant loss.  The big driver of the industry’s woes is regulation, both as a result of the creation of the Consumer Finance Protection Bureau and the actions of the states. 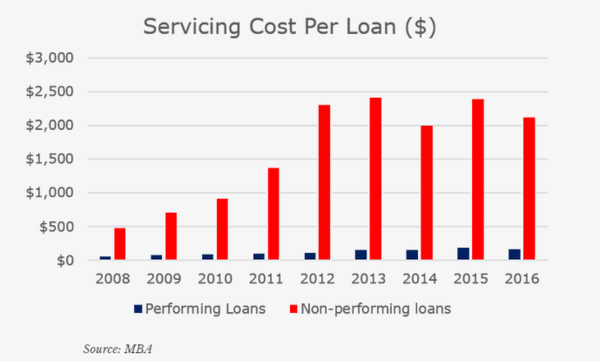 As one colleague noted at the California Mortgage Banker’s technology conference in San Diego, “every loan is a different problem.” But nobody in the regulatory community seems to be concerned by the fact that the cost of servicing loans has quadrupled over the past eight years.  The elephant in the room is compliance costs, which accounts for 20% of the budget for most mortgage lending operations.

To some degree, technology can be used to address rising costs.  But when it comes to unique events spanning the range from legitimate consumer complaints to a phone call to follow-up on a past request or spurious inquiries, none of these tasks can be automated.  The obsession with the wants and needs of the consumer has led the mortgage industry to some truly strange behaviors, like Nationstar(NYSE:NSM) deciding to rename itself “Mr. Cooper.”

Driven by the atmosphere of terror created by the CFPB, the trend in the mortgage industry is to automate the underwriting and servicing process, and make sure that all information used is documented and easily retrieved. The better-run mortgage companies in the US use common technology platforms to ensure a compliant process, but leave the compassion and empathy to humans.

By using computers to embed the rules into a business process that is compliant, big steps are being made in terms of efficiency. Trouble is, this year many mortgage lenders are seeing income levels that are half of that four and five years ago.  Cost cutting can only go so far to addressing the enormous expense inflation resulting from excessive regulation and revenue compression due to volatility in the bond market.

Avoiding errors and therefore the possibility of a consumer complaint (and a regulatory response) is really the top priority in the mortgage industry today. As one CEO opined: “Sometimes the best customer experience is consistency in terms of answering questions and quickly as possible and communicating in a courteous and effective fashion.”

All of this costs time and money, and then more money.  Our key takeaway from a number of firms The IRA spoke with over the past three weeks is that response time for meeting the needs of consumers and regulators is another paramount concern.

Being able to gather information, solve problems and then document the response to prove that the event was handled correctly is now required in the mortgage industry.  But as one senior executive noted: “Sometimes people are easier to change than systems.”

So in addition to the FOMC, banks and mortgage companies can also thank the CFPB and aspiring governors in the various states for inflating their operating costs for mortgage lending and servicing by an order of magnitude since the financial crisis.  This is all done in the name of helping consumers, you understand, but at the end of the day it is consumers who pay for the inflation of living costs like housing.  Investors and consumers pay the cost of regulation.

Over the past decade since the financial crisis, the chief accomplishment of Congress and regulators has been to raise the cost of buying or renting a home, while decreasing the profitability of firms engaged in any part of housing finance.  We continue to wonder whether certain large legacy servicing platforms — Walter Investment Management (WAC) comes to mind — will make it to year-end, but then we said that last year.

Like the army of the dead in the popular HBO series “Game of Thrones,” the legacy portion of the mortgage servicing industry somehow continues to limp along despite hostile regulators and unforgiving markets.  Profits are failing, equity returns are negative and there is no respite in sight.  Even once CFPB chief Richard Cordray picks up his carpet bag and scuttles off to Ohio for a rumored gubernatorial run, business conditions are unlikely to improve in the world of mortgage finance. Winter is here.

This piece was written by Christopher Whalen, author of the new book Ford Men and chairman of Whalen Global Advisors. Over the past three decades, he has worked for financial firms including Bear, Stearns & Co., Prudential Securities, Tangent Capital Partners and Carrington. This piece does not necessarily reflect the opinion of Hedgeye.