Did the Fed Just Warn The Debt Bubble Is Beginning to Burst?

Did the Fed Just Warn The Debt Bubble Is Beginning to Burst? by Graham Summers – Gains Pains Capital

While everyone is focusing on political issues, the NY Fed published a stunning report on the state of the US consumer.

According to the NY Fed, the average US household has hit a new record for debt, surpassing the old record set at the peak of the 2007 bubble. 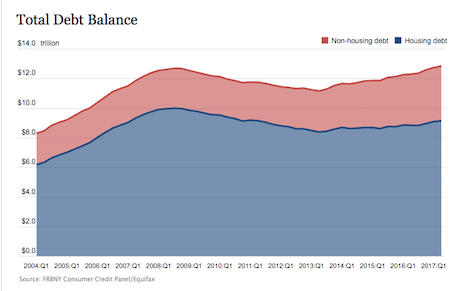 Put simply, the average US household today is more in debt that it was in late 2007: the former peak of a massive debt bubble.

Of course, revealing that we’re in a massive debt bubble is only half the story. The more critical issue for those looking to invest based on this is when the debt bubble bursts.

Flows of credit card balances into both early and serious delinquencies climbed for the third straight quarter—a trend not seen since 2009.

The NY Fed noted that early and serious delinquencies for credit cards are rising. This is not a new development either… it’s been happening for NINE straight months: a trend not seen since the depth of the great crisis in 2009.

So US households are more in debt than they were in late 2007… and the credit cycle is turning with delinquencies rising just as they did in the Great Crisis of 2008.

Meanwhile, stocks are at all-time highs. So what happens when the markets wake up to the fact that yet another massive debt bubble is beginning to burst? 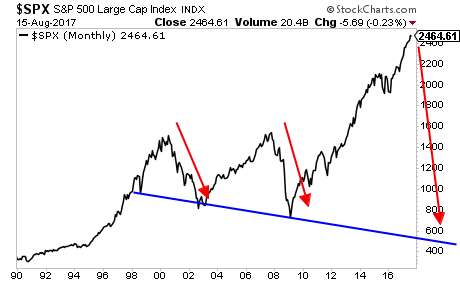 On that note, we are already preparing our clients for this with a 21-page investment report titled the Stock Market Crash Survival Guide.

In it, we outline the coming collapse will unfold…which investments will perform best… and how to take out “crash” insurance trades that will pay out huge returns during a market collapse.

We’ve extended our offer to download this report FREE due to today’s market breakdown. But this is the last day this report will be available to the general public.

To pick up one of the last remaining copies…