This Insight continues the serial publication of the new, Revisited edition of my book, The Golden Revolution (John Wiley and Sons, 2012). (The first instalment can be found here.) The book is being published by Goldmoney and will also appear as a special series of Goldmoney Insights over the coming months. This instalment comprises the third chapter of Section II.

Of Bubbles and Bailouts

“Surely difficult challenges lie ahead for the Fed, some undoubtedly of our own making.”

Things were looking rather grim for the US economy in mid-1987, soon after Paul Volcker left his job at the helm of the Federal Reserve. The dollar was falling, fast. Inflation and inflation expectations were rising. It was clear that the Fed was going to need to start raising interest rates soon, perhaps sharply. Having successfully broken the relentless uptrend in consumer price inflation and supported the dollar in the early 1980s with explicit monetary targeting, double-digit interest rates, and the most severe post–World War II recession to date, financial markets were naturally increasingly fearful that the Fed might follow a similar if less severe script again. While the exact trigger will perhaps never be known, this was the fundamental economic backdrop that led to the great stock market crash of October 19, 1987, when the Dow Jones Industrial Average declined by 23 percent (Figure 8.1).1 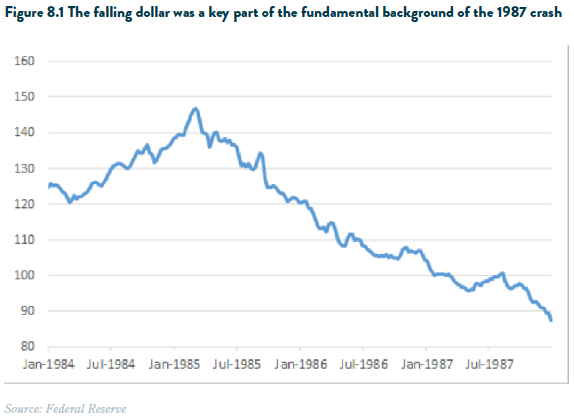 Alan Greenspan, a veteran of US economic policy-making circles but a neophyte at the Fed, sensed correctly that an emergency easing of interest rates and other liquidityenhancing measures would help to restore confidence in the equity market, financial system, and economy generally and prevent a possible recession. Sure enough, equity markets bounced sharply in the following days and continued to climb steadily in the following months, recovering all losses with what seemed little effort. This episode was most certainly a baptism by fire for Greenspan and one that, no doubt, taught him at least one important lesson: if done quickly and communicated properly to the financial markets, emergency Fed policy actions can provide swift and dramatic support for asset prices. But at what cost?

Although Greenspan might consider this his first major crisis-management success, was the Fed’s policy reaction to the 1987 crash proportionate or even appropriate?

Was it an equal but opposite reaction that merely temporarily stabilized financial markets or did it, in fact, implicitly expand the Fed’s regulatory role to managing equity prices? Indeed, one could argue that this intervention was merely the first of a series of progressively larger Greenspan ‘”puts”—to use the financial market jargon for providing monetary support—that the Fed would offer to the financial markets during the eighteen years that the so-called Maestro was in charge of monetary policy and, let’s not forget, bank regulation.

Having received a shot in the arm from the abrupt easing of monetary conditions in late 1987, as well as the lagged effects of a much weaker dollar, the US Consumer Price Index rose more than 5 percent year over year in early 1989, and the Fed raised rates in response, eventually tipping the economy into a recession. One aspect of the 1990– 1993 recession that received much comment and analysis was the “double dip” aspect to it. Whereas the initial phase of the recession looked like a fairly typical business investment and inventory cycle, the second phase was characterized by a general credit crunch that constrained growth in most areas of the economy. What was the primary cause of this credit crunch? Why, the long-forgotten savings and loan (S&L) crisis.

THE FORGOTTEN US HOUSING BUBBLE

The American dream of home ownership is normally associated with the US economy’s capitalist traditions. However, according to many politicians, it is something that simply cannot be achieved without ever-growing government regulation and subsidies. Politicians just love finding ways to assist their constituents with home purchases. In some cases, there is so much government help available that homeowners end up owning homes they can’t afford. In the 1980s, Congress decided that, to make housing more affordable, it would ease certain regulations previously restricting the lending activities of savings and loans (S&Ls). Credit would thereby become more widely available to a range of borrowers who previously might not have qualified. Importantly, this also included risky commercial lending.2

Seeking higher returns, some S&Ls broadened their lending activities, expanded their balance sheets, and focused more and more on the riskiest, most lucrative opportunities. As S&Ls were financed primarily by deposits, they needed to offer more attractive deposit rates to expand. But because all deposits were insured in equal measure by the Federal Savings and Loan Insurance Corporation (FSLIC, the S&L equivalent of the FDIC, the Federal Deposit Insurance Corporation), depositors would shop around, seeking out the best rates. Deposits therefore flowed from the more conservative to the riskiest institutions offering the highest rates on deposits— fully insured, of course. Some of the most aggressive S&Ls went on a shopping spree, snapping up their more conservative counterparts and deploying their newly acquired deposits into the latest, greatest, high-risk, high-return ventures.

The results were predictable. By the late 1980s, a huge portion of the S&L industry was insolvent. The recession of 1990–1991 made a bad situation worse. The FSLIC funds were rapidly depleted. But a federal guarantee is supposed to be just that, a guarantee, so Congress put together a bailout package for the industry. A new federal agency, the Resolution Trust Corporation (RTC), issued bonds fully backed by the US Treasury and used the proceeds to make insolvent S&L depositors whole.

All of this took time, however, and as the bad assets of the S&Ls were worked off, the economy entered part two of the double dip, and the credit crunch intensified. The Fed, however, knew what to do. By taking the Fed funds rate all the way down to 3 percent, real interest rates were effectively zero for the first time since the 1970s (Figure 8.2). The Fed then held them there for nearly two years, finally raising them in early 1994, when it was absolutely clear that the economy was recovering strongly and the credit crunch was over. 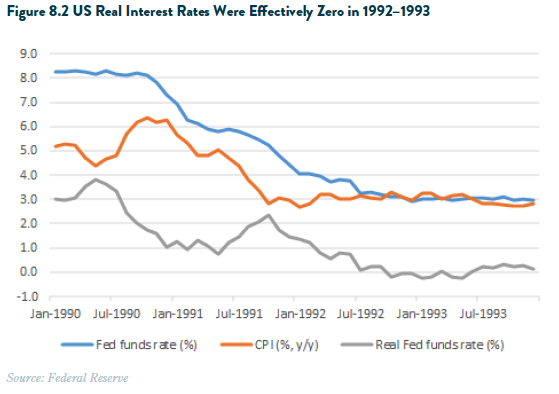 Fast-forward a decade. We all know that the origins of the most recent boom and bust in US housing and credit can generally be traced back to the highly accommodative Fed policy implemented in the wake of the dot-com bust in 2001–2003. By late 2003, there was clear evidence that the US housing market was surging, and homeowners were extracting record amounts of equity from their homes, thereby stimulating the broader economy. However, amid relatively low consumer price inflation, the Fed determined—incorrectly, we now know—that interest rates should rise only slowly, notwithstanding the surge in asset prices.

With the Fed moving slowly and predictably, risk premia for essentially all assets plummeted. In a Fed policy speech in the mid-2000s, Greenspan referred to the “conundrum” of low-term premia for US Treasury bonds. But low credit spreads for corporate bonds and low implied volatilities for nearly all assets were clear evidence of inappropriately loose Fed policy all the way into early 2007.

By the time the subprime mortgage crisis hit in mid-2007, the economic damage had been done. There had been vast overconsumption at home and overinvestment around the world, resulting collectively in perhaps the most monumental misallocation of resources, outside of wartime, in world history. There was no avoiding the subsequent, inevitable crash; the new challenge quickly became how to prevent a complete collapse of the financial system. At this point, the crisis acquired an overt political dimension as US and some other countries’ taxpayers were asked, in various direct and indirect ways, to bail out those institutions at risk of insolvency and default.

In retrospect, the entire US S&L debacle, from its origins in regulatory changes and government guarantees, through the risky lending boom, bust, credit crunch, and fiscal and monetary bailout can be seen as a precursor to the far larger global credit bubble and bust of 2003 to the present. Just replace the S&Ls with Fannie and Freddie and the international “shadow banking system.” But there is no need to change the massive moral hazard perpetrated by government regulators, including, of course, the Fed, and the reckless and greedy financial firms that played essentially the same role in both episodes.

Those surprised by the post-2008 efforts by the Fed and other regulatory bodies to expand their power over the financial system and the economy in general have not been paying attention to history: for every market action, there is a disproportionate regulatory and monetary policy reaction that increases the moral hazard of the system, laying the foundations for an even greater crisis in future. History may not repeat, but it certainly rhymes, as we explore in some detail in the following chapter.

1 Several triggers for Black Monday have been proposed in a number of papers. One relatively recent study was prepared by Federal Reserve staff and listed rising global interest rates, a weaker dollar, and a rising US trade deficit as potential fundamental, macroeconomic causes and a proposed corporate tax change, listed options expiry, and large redemptions from a prominent mutual fund group as potential immediate triggers. See Mark Carlson A Brief History of the 1987 Stock Market Crash with a Discussion of the Federal Reserve Response, Federal Reserve Board of Governors Finance and Economic Discussion Series, 2006.

2 A reasonably complete timeline of the key events leading up to the S&L crisis is provided by the FDIC at www.fdic. gov/bank/historical/s&l/.