Happiness Is a Normal Yield Curve

“There is a limit to how much the United States Treasury can borrow.”

“In other words, we have the models we have because of inertia and theology, but also because all we can do is all we can do.”

“[T]he specific manner by which prices collapsed is not the most important problem: A crash occurs because the market has entered an unstable phase, and any small disturbance or process may have triggered the instability. Think of a ruler held up vertically on your finger: This very unstable position will lead eventually to its collapse, as a result of a small (or an absence of adequate) motion of your hand or due to any tiny whiff of air. The collapse is fundamentally due to the unstable position; the instantaneous cause of the collapse is secondary.” 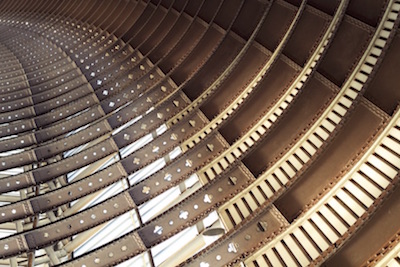 Once again I start this letter with a warning: A recession is eventually coming and a financial crisis with it. There is a real potential for it to come soon, as in the next year or two, although serious tax reform could change that equation. But at the end of the day, the pressures of too much government debt and too many government promises, plus growth that is continually grinding slower, will result in a recession. There is always another recession. You can’t run your life and business as if you expect one to happen tomorrow, but you can make contingency plans. With each passing day, recession gets closer, but that’s no reason to be fearful if you’re prepared.

I’m not trying to sound like an Old Testament prophet – OK, so maybe I am – but this is serious. Many business owners aren’t ready, nor are many portfolio managers and individual investors. They will likely regret their inattention.

Today I will show you a simple indicator that has an excellent recession-forecasting record, according to research by the Federal Reserve itself. Though the Fed’s own wacky policies may have weakened this early-warning system’s reliability, an interpretive adjustment can restore its usefulness.

First, thought, let me give you yet more reasons for concern on a completely different front. We have been getting complaints from readers that Thoughts from the Frontline is no longer showing up in their inboxes. We have cornered the problem, and its name is Google.

Google’s Gmail creates categories to characterize emails that are sent to your inbox. They are trying to route all newsletters directly into a dedicated folder (I believe they even call it “Promotions”), instead of sending them through to people’s inboxes. There is not much we can do about it at this point. I’m on the hunt for an email delivery specialist who can help us with what is now being called “inboxing.”  This problem is industrywide. If you are using Gmail, you might want to check to see where the emails that you want to read are actually being routed.

The industrious Michael Lebowitz of 720Global performed an invaluable service last week by assembling “22 Troublesome Facts” behind his reluctance to follow the bullish herd. Most have helpful source links, too. Here’s a small sampling:

• The S&P 500 cyclically adjusted price-to-earnings (CAPE) valuation has only been higher on one occasion, in the late 1990s. It is currently on par with levels preceding the Great Depression.

• Total domestic corporate profits (w/o IVA/CCAdj) have grown at an annualized rate of just .097% over the last five years. Prior to this period and since 2000, five-year annualized profit growth was 7.95%. (Note: Period included two recessions.)

• Over the last 10 years, S&P 500 corporations have returned more money to shareholders via share buybacks and dividends than they have earned.

• At 45.3%, the ratio of corporate debt to GDP is at historical highs, having recently surpassed levels preceding the last two recessions.

So, US corporations are simultaneously more indebted, less profitable, and more highly valued than they have been in a long time. Furthermore, they are intentionally making themselves more leveraged by distributing cash as dividends and buying back shares instead of saving or investing that cash. Yet investors cannot buy their shares fast enough. Maybe this will end well… but it’s hard to imagine how.

The once-foolproof recession indicator I mentioned up top is the Treasury yield curve. It has allowed me to predict the last two recessions. The yield curve is simply a chart showing Treasury yields on the vertical axis and maturity on the horizontal axis. Below is how it looked at mid-year 2017, courtesy of the US Treasury’s website. You can plot other dates here. 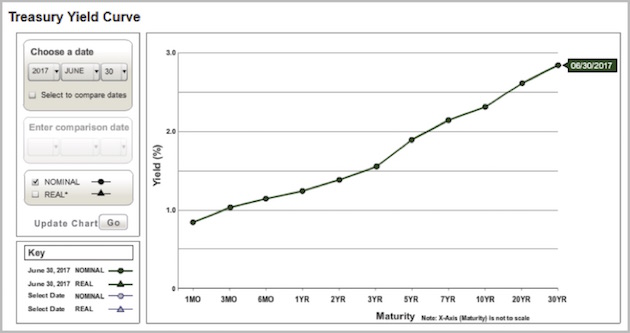 Bond traders keep a close eye on the yield curve, and especially on changes in its shape. The curve above is fairly normal. Other things being equal, you expect interest rates to slope upward as time to maturity increases. That’s because lenders demand higher rates to compensate for the higher risk that comes with lending money for longer periods. The longer you let a borrower hold your cash, the greater the chance something bad will happen to it.