One day, a mysterious package arrived at my desk…

Now, I get a fair amount of reader mail and I respond personally to each one. But this particular package was much heavier than your typical piece of mail, and it was oddly shaped compared to the usual packages I receive.

It was addressed to the “Captain of the Crow’s Nest.”

When I opened it, I discovered a block of wood with three notches cut into it and a nail threaded through a hole in the notches. Here it is: 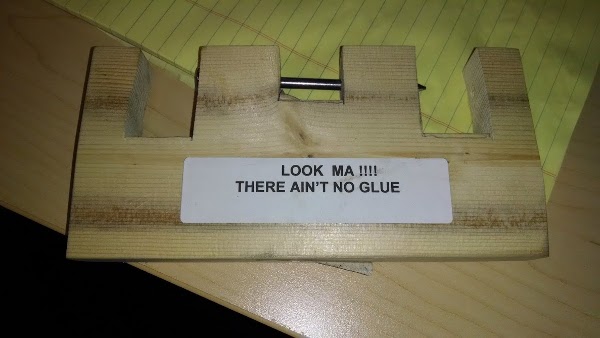 I was a perplexed. What was this item? A puzzle? A craft project? A bizarre threat of some kind?

Confused, I pulled two letters out of the envelope, one of which was sealed.

I thought I should send you something to slow you down. At my age – 97 – I work kind of slow.

After the third day, my ears begin to burn. How did he get that nail in there?

The sealed letter was scrawled with this cryptic message: Open on the Third Day.

Ah-ha, so I did have a puzzle on my hands — and I love puzzles. I excitedly developed a few theories; some more reasonable than others.

Perhaps it was a trick nail? I moved it back and forth and it seemed as solid as can be. The top of the nail had not been glued on or manipulated in any way.

Maybe the wood had been cut open and glued back after the nail was inserted. I pried and pulled at the wood, with no movement or signs of distress. There was also a sticker on the front that read: Look Ma, No Glue!!

Both the nail and the box passed the sniff test. So what was this magic trick? How in the hell did he get that nail in there?

I was stumped for the first day, so I set it on my desk and pondered it for another day when I started to get somewhere…

I figured if there wasn’t some parlor trick involved, Hal must have manipulated the wood itself. After discussing it with a couple of colleagues who have done carpentry and woodworking, we finally developed our theory.

On the third day, I opened the letter. It verified our theory, and the mystery was solved.

Now, I’m not going to spoil the trick for you here. (If you’re curious, just e-mail me here and I’ll give you the answer, as well as instructions for building your own “trick box.”) But I will say that we were right, the wood had been manipulated — and in a very simple way.

It goes to prove the old Occam’s Razor theory: the simplest explanation is usually the soundest.

The same goes for investing…

Most people take a look at the stock market and get downright scared and confused. They see talking heads arguing about esoteric market movements, complicated technical charts, and unexplainable swings up and down and think “God, this is far too complex for someone like me…”

Unfortunately, that’s why many people don’t even bother playing the market. In fact, it’s getting worse: a recent study found that millennials — 18- to 29-year-olds — are downright terrified of buying stocks.

Roughly 46% of those with more than $100,000 to invest claimed they would “never be comfortable in the stock market.”

Over half of millennials said they are “not very confident” or “not at all confident” putting money in stocks for retirement investing.

I can obviously understand the sentiment — there’s a reason millennials are referred to as “Recession Babies.”

They’ve seen firsthand the effects of a market crash. But if you aren’t buying any stocks for retirement, you’ll be in for a rude awakening if you’re planning on surviving on savings accounts and Social Security…

Truth be told, buying and maintaining a portfolio really isn’t that complicated. It’s not a magic trick.

Once you find out exactly how it all works, it’s as easy as pie…

For instance, if you wanted to diversify your own portfolio with individual stocks, it would take you countless hours of research and diligence in order to build a portfolio that covered all conceivable bases. Not to mention the copius fees for buying and selling that just eat away your profits.

That’s why I love index funds.

They’re easy. They’re cheap. They’re diversified. And best of all, they actually beat the returns of most money managers and financial advisors. While these guys are moving around stocks each and every day, a trusty market index is faithfully chugging away, making you easy money while these “professionals” spin their wheels trying to juggle hundreds of stocks.

And while they are juggling, it is costing you a fortune. If you have a financial advisor, they get paid each time they buy a stock. So riding a consistent portfolio doesn’t make them any money.  All told, the average American spends around $150k over a lifetime on these types of fees. And while they are just charging you to move paper around, they aren’t even bringing home the bacon. In fact, over the past five years, two out of three actively managed mutual funds failed to beat the S&P 1500 total stock market index.

It doesn’t have to be that way…

Warren Buffett himself has been demonstrating this technique. In a shareholder letter, he advocated essentially the same thing we are: low-cost index funds.

“My advice to the trustee couldn’t be more simple: Put 10% of the cash in short-term government bonds and 90% in a very low-cost S&P500 index fund. (I suggest Vanguard’s.) I believe the trust’s long-term results from this policy will be superior to those attained by most investors — whether pension funds, institutions or individuals — who employ high-fee managers.”

In Berkshire’s 2005 annual report, Buffett argued that “active investment management by professionals – in aggregate – would over a period of years underperform the returns achieved by rank amateurs who simply sat still.” He explained that the massive fees levied by a variety of “helpers” would leave their clients worse off than if the amateurs simply invested in an unmanaged low-cost index fund.

Buffett actually made a million dollar bet that a “lazy” portfolio would beat a slog-it-out, high-frequency investing one. Buffett bet Protégé Partners — an asset management firm — that a Vanguard S&P 500 index fund would have better returns than a group of five hedge funds.

He bet a million bucks that it would…

Buffett’s little index fund is up over 85% while Protégé’s five funds gained an estimated 22%.

And that doesn’t include the immense fees associated with a big time money manager. Hedge funds practice “two and twenty”, where they charge you 2% up front and take 20% of your profits!

But you can just buy a fund like the Vanguard S&P 500 (NYSE: VOO) on your own in a matter of minutes and just hold on to it. Here’s how it did over the past five years:

That’s one of the reasons I started The Crow’s Nest: to demystify the market and give you the basic tools to be able to grow your wealth safely and effectively — without the stress of jumping in and out of positions or swinging for the fences on risky stocks that have a good chance of crashing and burning.

Index funds are a step in the right direction. But you can compound your easy gains with one simple plan Crow’s Nest readers have been using for years now. Our $50 Retirement Plan is as easy as it gets. You don’t have to sit around analyzing charts. You don’t have to drive yourself crazy watching the financial news every day. And you don’t have to jump in and out of positions.

My positions in these stocks is the reason I’m up 61% this year, and returned 103% and 349% over the last two years. I currently have 27 double-baggers in our portfolio.

That’s because the $50 Retirement Plan allows you to buy a stock and sit back as it keeps mulitplying. It really is that easy.

The only magic here, is the magic of compound interest. Start your plan today.