Around the World, This Indicator Peaked Last Week

Around the World, This Indicator Peaked Last Week by Michael Carr – Banyan Hill

However, globalization also increases business cycle correlations. If the United States enters a recession, for example, production of low-cost goods in other countries declines. Now, those countries suffer recessions at the same time as the U.S. Most will also recover at the same time.

At the end of last week, the seasonal trend turned bearish in almost all major market averages around the world. 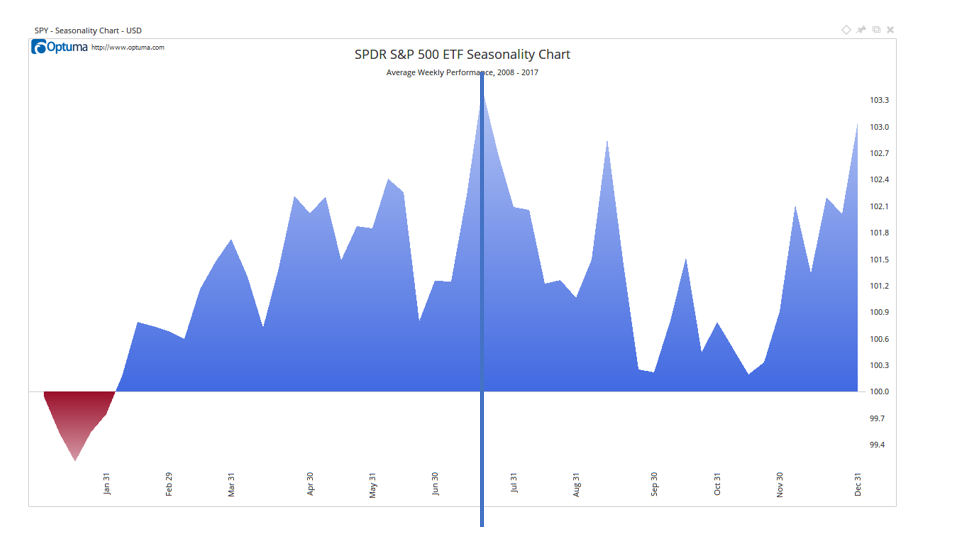 The chart above shows the seasonal trend of the SPDR S&P 500 ETF (NYSE: SPY). The vertical line on the chart shows where we are now. The trend’s annual peak occurred last week, on July 21.

Seasonal trends are found with mathematical techniques like the Fourier Transform. These same tools have many applications beyond the stock market, like reducing background noise in cellphone calls. So, the math is well-understood and useful.

Seasonal trends are common in financial markets. As one example, a seasonal trend almost completely explains why so many stock market crashes happened in September and October.

Farmers harvest crops in the fall. In the late 1800s, they sold the harvest for cash at local granaries. Crops flowed to markets where grains were processed, usually by rail. Cash changed hands at each stop.

Before computers, banks in the Midwest needed physical cash to start this process. Banks back East sent cash to them, usually at high interest rates. Eastern banks then had little cash since cash was limited under the gold standard of the time.

Ted joined The Sovereign Society in 2013. As an expat who lived in South Africa for 25 years, Ted specializes in asset protection and international migration. He is the editor of The Bauman Letter and Plan B Club.