War On Independent Media Explodes To Orwellian Levels – What Are You Going To Do When Your Favorite Websites Are Gone? by Susan Duclos – All News Pipeline

Google’s YouTube censorship practices have increased since the election of President Trump, to the point where their liberal “flaggers” are able to get videos removed from the public eye, demonetized, and in many cases creators’ entire channels completely disappear in restricted mode when reporting on the very same topics the MSM does, just not toeing their “official” narrative.

We will start with the latest example of YouTube allowing their “flaggers” or even worse, their “bots” to determine what gets seen and what doesn’t according to ideology, rather than “community guidelines.”

Before showing the latest example, let’s look at who the these “flaggers” are, compared to YouTube claims. In 2014, it was revealed that not only does YouTube have what they call a “global community of volunteer contributors,” given the ability to flag videos as inappropriate, or having violated some community guideline, but they also have “super-flaggers,” which includes “Around 200 people and organizations,” given the ability to “flag up to 20 videos at once,” supposedly to be “reviewed by YouTube staff.” (Sources – CNet, WSJ, Financial Times)

On YouTube’s own page, they claim: “*Please note that flagged videos do not automatically get removed. We have trained internal teams, fluent in multiple languages, who carefully evaluate your flags 24 hours a day, seven days a week, 365 days a year in time zones around the world.”

Lets put that myth about videos being “reviewed” before being removed, right now.

Mark Dice, with over one million subscribers, recently had a video of his titled “This is CNN,” showing a number of embarrassing CNN clips, publishing his video at a time where the news organization has been engulfed in a number of controversies, including publishing a fake news story that had to be deleted, retracted, apologized for and resulted in three high profile employees being forced to resign.

Someone did not like CNN’s own idiocy being exposed by Dice, so they “flagged” his video and YouTube put it on private and locked it there, so that no one could see the video. Dice revealed what they had done publicly on Twitter highlighting @TeamYouTube, which is their social media account. The result was they restored his video after “reviewing” it, which begs the questions, 1)Who flagged it? 2)Why was it locked on private in the first place? 3)Had Dice not had a slew of followers nailing TeamYouTube on social media, making their unethical practices very public, would it have been restored?

I feel I can safely make the assertion that YouTube is also allowing their liberal “flaggers” or “bots”to have videos demonetized also, simply because said video offended them or hurt their little feelings or programming, without the video in question even being reviewedby a human being that is part of YouTube’s staff. I can make this assertion because of the multiple instances where we have monetized a video, then at a later date, after ads had been running on it for some time, someone would “flag it” and then I would get notified by YouTube that the video was “not” approved for monetization because it was not “advertiser friendly.”

How do I know it was not reviewed by YouTube staff before they stripped monetization? Because after I appealed the demonetization, then they reviewed it, and approved it saying, why yes, it is advertiser friendly, meaning it did comply “with YouTube’s Terms of Service and Community Guidelines,” and was “eligible for advertising.”

Just a couple examples shown below to prove my point and please note the subject matter, where in each case, they were flagged for ideology not guidelines, nor advertiser unfriendly content, there was no nudity, no cussing, no sexual content and no incitement to violence and violated none of YouTube’s terms or community guidelines as evidenced by the reversal after someone finally reviewed it. 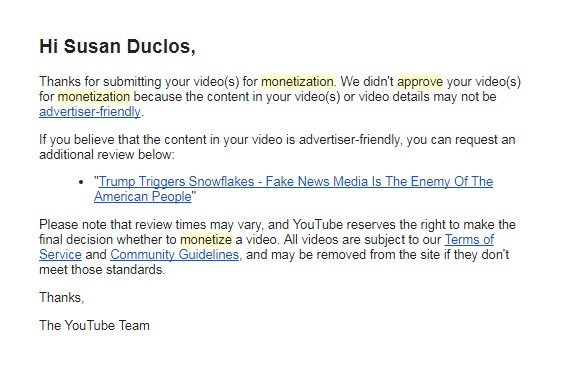 Results after YouTube staff actually does review the video:

Another that was demonetized because someone flagged it, then after appeal was found be advertiser friendly after all.

Rather than going on providing a screen shot of each and every email individually, let me just show how often these  flaggers or bots harass video creators and how YouTube continues to allow it: 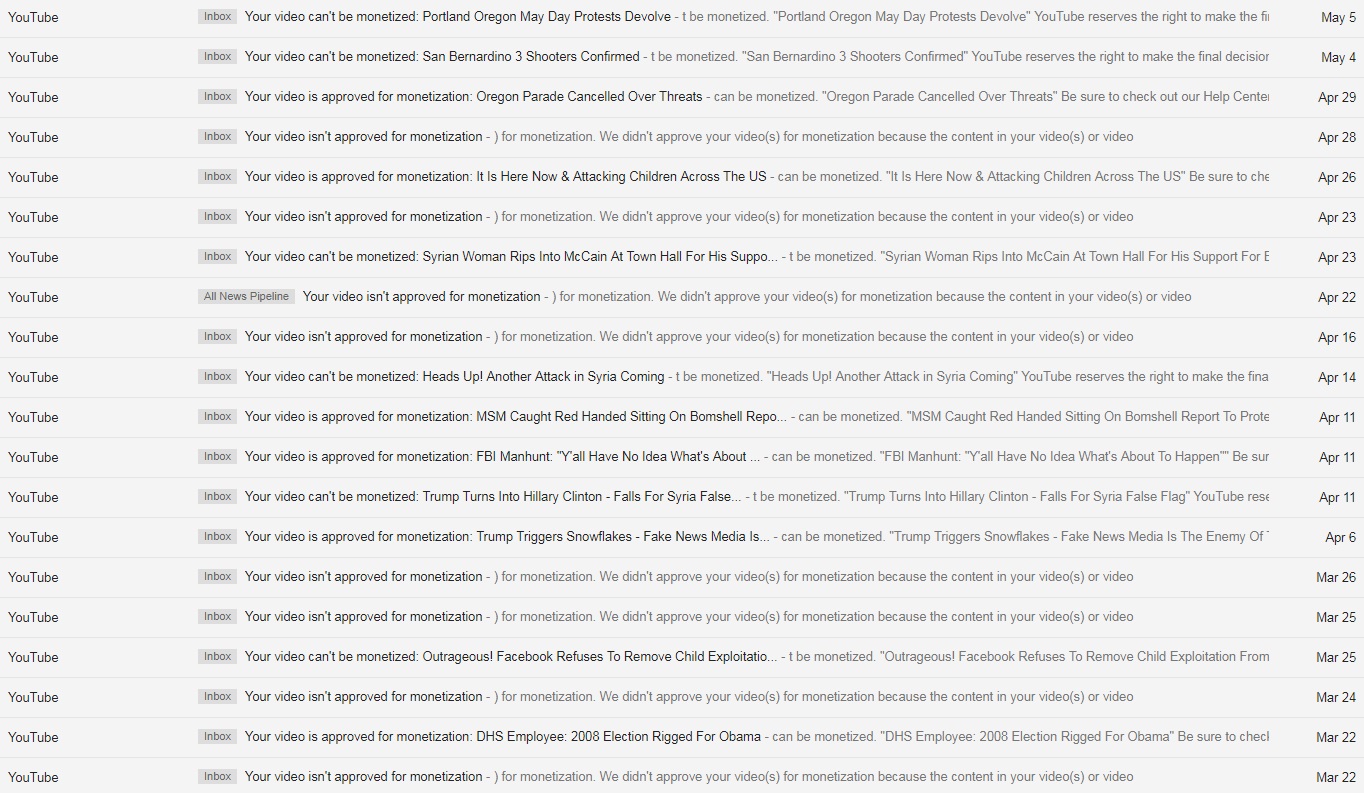 Note– In some of those emails, 5 or 6 videos were demonetized at once (some of them had already been up and monetized for years), with a list that I then had to go through one by one to appeal separately.

YouTube’s so-called flaggers are abusing the system and have been for years, yet YouTube does nothing to correct this issue, allows them to continue to harass video creators simply because their ideology is different than those given the right to flag videos for YouTube. According to some, they have also set up bots to flag content, yet who sets the bots algorithms which seems to “flag” content that violates no gudelines?