The ORAC values of the following spices-herbs-foods are rated very high (healthier?) and are worth considering for your overall health and well-being.

ORAC is an abbreviation for Oxygen Radical Absorbance Capacity and was developed by the National Institutes of Health in Baltimore.

The higher, the better…

It is widely believed that high antioxidant foods help greatly to lower the risks of cancer, degeneration, and disease.

The following list consists of high ORAC value food and spices. Consider making an effort to obtain and consume more of them in your normal diet. Ones health is paramount to survival!

Note: The ORAC values in this list are normalized to 100 grams of weight (about 3.5 ounces) because that is the way in which the original database of information was presented. The intent is to ‘normalize’ the various items to simply compare ‘raw value’, NOT ‘amount per serving’.

Note: The list does not factor or attempt to suggest the quantities that a person would normally eat in one serving (for example – who is going to eat 3.5 ounces of cloves in one serving??). I simply wanted to point out which ‘foods’ were literally the highest (that I could find information about).

Note: Data sourced from the US Department of Agriculture during 2010. The USDA recommends an ORAC unit ingestion of about 3000 to 5000 units daily.

Note: ORAC values listed here are in units of µmol TE/100g (micromol Trolox Equivalent per 100 grams). Trolox equivalency is used as a benchmark for the antioxidant capacity.

Note: The list I’ve put together here is not all-inclusive

Update: Sometime during 2012, the USDA apparently removed their ORAC listings.

This is not medical advice. 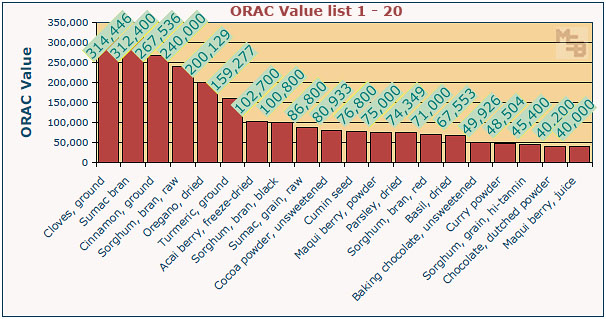 Ken Jorgustin’s survival blog focuses on a wide variety of preparedness topics varying from short to long term actions and solutions for wide-ranging scenarios of preparation… for daily life, disaster, or even SHTF collapse. Subjects include situational and risk awareness, the dangers, systemic risks, and avoidance of dependence upon the major ‘modern’ systems that we take for granted, topics of self-reliance and self-sufficiency, and practical solutions to live a way of life while surviving these uncertain times. Modern Survival is Preparedness For Life Preparedness is a process and will become a way of life – one in which you have more control over your own destiny. Being better prepared will help liberate you from “the system” which in many ways is designed to hold you down and keep you “dependent”. Modern Survival Blog has been committed since JAN-2010 to produce a wide variety of information to hopefully provide you with ideas for your own preparedness.