Dissolve Illinois. Decommission the state, tear up the charter, whatever the legal mumbo-jumbo, just end the whole dang thing.

We just disappear. With no pain. That’s right. You heard me.

The best thing to do is to break Illinois into pieces right now. Just wipe us off the map.

Cut us out of America’s heartland and let neighboring states carve us up and take the best chunks for themselves.

The group that will scream the loudest is the state’s political class, who did this to us, and the big bond creditors.

That is the advice of John Kass of the Chicago Tribune, who penned an article explaining that Illinois has no way to pay its bills and that carving up the state is the best solution.

After 736 days, Illinois finally passed a constitutionally mandated budget on July 6 over the veto of Republican Governor Bruce Rauner.

Governor Bruce Rauner and the Illinois State Legislature, which is Democratically controlled, hadn’t agreed on a state budget for the last two years.

In July 2017, Moody’s reported that Illinois faced over $15 billion in unpaid bills, $251 billion in unfunded liabilities, and an imminent downgrade to junk bond status.

Illinois currently has a Triple-B minus rating, which is one notch above junk status.

A downgrade would cause borrowing costs to rise.

Let’s be clear: The crisis is a direct result of decades of corruption. Four of the last nine Illinois governors have been convicted of corruption. These are just the ones that were convicted, with suspicions lingering about the rest.

The state has lost more people in the past three years than any other state.

In 2013, the Securities and Exchange Commission (SEC) branded Illinois with pensions security fraud. On March 12, 2013, a Wall Street Journal editorial noted, “It’s now official: The Land of Lincoln has the nation’s most reckless and dishonest state government when it comes to pension liabilities.” According to the WSJ, the state’s “accounting practices would get private market participants thrown in jail.”

There have been several attempts by Illinois politicians to raid the pensions of teachers and other public employees.

While these attempts have proven unsuccessful thus far, the response by the same politicians that created the mess has been predictable.

Both major parties have used the crisis to attempt to move forward party agendas while cutting basic services to the state’s most vulnerable.

So what does Illinois have to do with making money in the resource sector?

Well, what’s happening in Illinois is an example of how bond markets are imploding after years of corruption and mismanagement.

This implosion is not unique to Illinois and is a precursor to a state and municipal debt bomb that will have a real and sustainable effect in the precious metals space.

For decades, states — and nations — have kicked the can down the road, and now it’s time to face real consequences. The many — in the case of Illinois, the average Illinois resident — will be the hardest hit.

A federal judge recently ordered the Comptroller to prioritize who gets paid.

The state, unlike the Fed, can’t print money, so its only option is to borrow and raise taxes.

This is leading to declining property values as the tax burden continues to increase.

A default on pensions will be the last course of action in Illinois because the politicians know it’s game over for them once that happens. 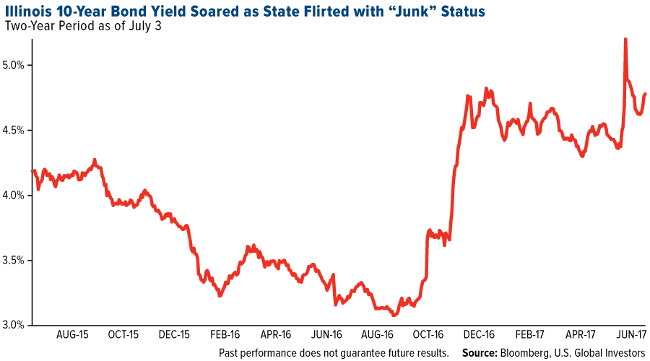 Approximately 33 states reported lower revenues than initially projected in the latest fiscal year, the highest number of states to come up short since the recession blew a giant hole in state budgets in 2010, according to the National Association of State Budget Officers.

Illinois, the debacle in Puerto Rico, bank runs in Greece, and the coming pension crises in Europe and Japan are all connected. Faith in government and investment in public debt will continue heading lower.

The sovereign debt implosion that’s in store will trigger a rush out of bonds and a rush into the dollar, the major U.S. stock indices, and the precious metals space.

What’s happening in Illinois is a real-time example of what’s in store.

Forget the talk about gold being a hedge against inflation or deflation; gold will serve as an important hedge against the political instability on the horizon.

2017 is the year to position yourself. The gains for those positioned correctly will be historic.