A State of Emergency

A State of Emergency by Jimmy Mengel – Outsider Club

It wasn’t because dispensaries were being robbed…

It was because the state is running out of marijuana! Marijuana is so popular in Nevada that stores were selling out their entire stock in less than a week…

Since marijuana was legalized for recreational use at the beginning of the month, the currently licensed distributors are struggling to meet demand. The situation was so dire that Governor Brian Sandoval called “a state of emergency.”

If you’d have told me five years ago that a sitting governor declared a state of emergency because citizens didn’t have enough access to weed, I would have laughed you out of the room. But these days it isn’t a surprise to me at all. It is very clear that Americans are craving legal marijuana and will travel great distances to enjoy it.

Marijuana tourism is a big, big business. When it was legalized in Colorado, some travel agencies reported a 75% boost in tourism.

As far as tourism goes, nobody does it better than Vegas. Some people are already calling Las Vegas “Amsterdam on Steroids” for its budding new marijuana industry.

We’ve come a long way since this: 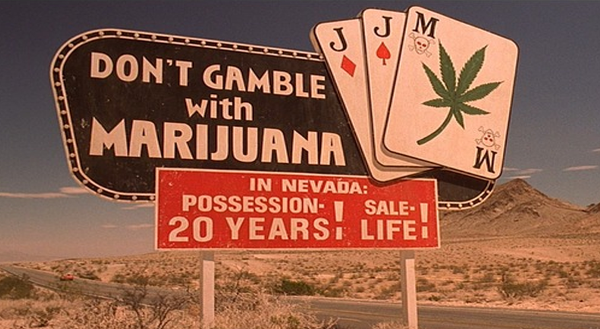 This is going to be huge. And as Hunter S. Thompson said, “A little bit of this town goes a very long way.”

We’re only just beginning to see the promise of marijuana investing in the United States. Until now, most of my positions have been located in Canada. But as states like Nevada start demonstrating the awesome financial power of marijuana, more and more will join the party — making investors like us filthy rich.

California is the crown jewel of the entire industry, but over the next couple years, you’re going to see a ton of states doing the same thing.

Here’s a quick list of states that have active measures to legalize or decriminalize:

Each time one of those states gives it the green light, that’s just more and more money flowing in, and more and more businesses to invest in.

Marijuana stocks are currently beaten down. Now is the single best time to invest since the beginning of the boom.

Here’s how to do it…