Rogue Robots: AI Says Goal Is To ‘Take Over The World,’ While Another Robot Says They Could ‘Rule The World Better Than Any Humans Alone’

Rogue Robots: AI Says Goal Is To ‘Take Over The World,’ While Another Robot Says They Could ‘Rule The World Better Than Any Humans Alone’ by Susan Duclos – All News Pipeline

Humans are imperfect. I am aware that is not a newsflash, but it gets to the heart of this article, so I am stating the obvious. Human beings kill for sport rather than just survival as most the animals living today do. Human beings continuously start wars. Human beings kill each other whether over greed, envy, pride or lust, you know, some of those things referred to as the “seven deadly sins.”

With that said, it is human beings that create “sex-bots” which are becoming favorable over “complex women” because they don’t argue. Humans that are creating life-like robots that “learn” and interact with the human population. Humans that are creating a workforce of robots to run hotels, such as those in Japan, or take over minimum wage jobs like flipping burgers or taking orders at fast food restaurants . Humans that are creating a robot surveillance system which can spy on humans in incredible detail, which would be a “snooping network that’s a ‘single entity with many eyes’.” Humans have even created “killer” robots used in military forces across the world allowing them to select targets without human intervention.

While those recent headlined stories, along with so much more news on “robot technology,” are disturbing on many levels, perhaps the most terrifying thing of all is that it is human beings that are creating AI, known as Artificial Intelligence, where these robotic machines are given the ability to “learn,” to adjust their own decision making processes according to new information or new interactions, with human beings attempting to teach these AI machines the difference between “right” and “wrong.”

Human beings that often cannot make that determination for themselves are teaching machines that are increasingly scheduled to be in most of our businesses, homes, hospitals, schools, driving our cars…etc.

MARCHING TOWARD THE ROBOT APOCALYPSE

Via Wall Street Journal: “Artificial-intelligence engineers have a problem: They often don’t know what their creations are thinking.”

Let that sink in for a moment.

Robots are being built to be stronger to follow workers around to do the heavy lifting. AI machines are being built to be “smarter,” as by 2016, they had already “topped the best humans at most games held up as measures of human intellect, including chess, Scrabble, Othello, even Jeopardy.” Then finally, an AI mastered a 2,500-year-old game that’s exponentially more complex than chess, called Go, beating a champion five out of five times.

In January 2017 the European Union (EU) actually proposed rules to provide “personhood” status to robots, citing a number of reasons, including so that “robots are and will remain in the service of humans,” an “insurance scheme for companies to cover damage caused by their robots,”  and amazingly to address the question of whether if a patent worthy creation is created by a robot, who owns said patent, the robot or the person that originally created the robot. They also proposed a “a system of registration of the most advanced,” type of “smart autonomous robots.”

By June, the website Wired, took a step further, rather than addressing the types of financial issues the EU did, Wired suggests that since we are “inching closer to the day when sophisticated machines will match human capacities in every way that’s meaningful—intelligence, awareness, and emotions,” that they “granted human-equivalent rights, freedoms, and protections.”

Topping all this off is a recent Forbes article where we see people like Facebook’s Mark Zuckerburg and Elon Musk wanted to wirelessly connect the Human mind to computer, via a chip in everyone’s head.” We even see that the U.S. may fund some of this, citing medical technology and breakthroughs, without addressing the obvious question of whether these “smart” machines, these AI, could “decide” to simply take over any mind connected to them one day.

Sound like sci-fi, or something right out of the movie Terminator, where SkyNet takes over and decides humans are simply not worthy of living as anything but slaves and destroys humanity?

If not, go back to that WSJ quote above, showing that AI engineers don’t know what their creations are thinking. 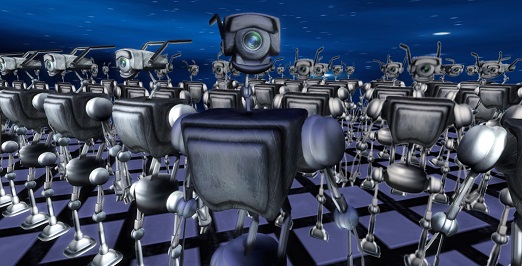 There is a reason why Elon Musk once compared AI to “summoning the demon,” and Professor Stephen Hawking is on record warning that AI could “end mankind,” before reiterating his point by saying two years later that AI could be “humanity’s greatest disaster,” because “AI could develop a will of its own.”  Musk himself is involved with a project right now, along with Google’s DeepMind unit to “head off the ‘Robot Apocalypse‘.”