Coconut oil is the extracted oil from coconut, the popular fruit of the coconut tree that’s well-known for growing in tropical areas. It’s also an outrageously popular topic among social media and health outlets in recent years.

Typically coconut oil is refined, bleached, and deodorized using high heat. The bleach filters the oil to eliminate any impurities, and sodium hydroxide is used as a preservative and to get rid of excess fatty acids. Coconut oil typically has a long shelf life because its high saturated fat content prevents oxidation. 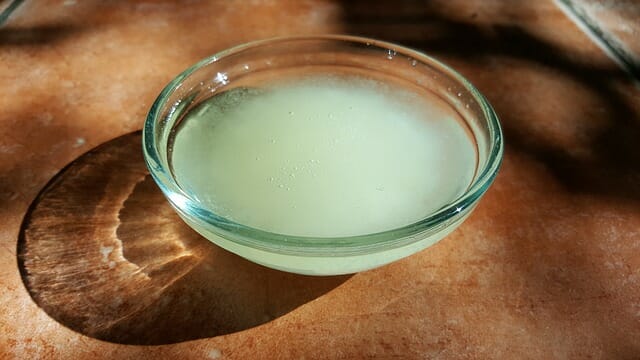 Coconut oil is the topic of hot debate – typically known for being fairly high in saturated fats. This can put it off-limits for some people trying to consume a low-fat diet plan. However, the benefits of coconut oil span much further than the detrimental effects of its saturated fat content – and not just in the digestive tract – it can be used in lots of different ways.

In addition to being consumed as part of the diet, coconut oil can also be applied for health benefits in a lot of different ways. It can be used topically, as a lotion, it can be melted and inhaled as a vapor solution, it can be used as shampoo – the list goes on.

Coconut oil is made by compressing the fats out of the white part of coconut flesh. It’s reputation for being high in saturated fat is not unjustified – around 84% of the calories in coconut oil are from saturated fat. This is incredibly high when compared to another organic oil like olive oil, which only contains 14% saturated fat. Even butter contains just over 60% saturated fat.

How can a food high in saturated fat be healthy?

How can one food – a food high in saturated fat, no less – be responsible for so many amazing health benefits?

Stearic acid has been shown to actually help balance cholesterol levels, and is the healthiest of the 3 long-chain fatty acids.

The most common medium-chain fat in coconut oil is lauric acid, making up almost 75% of coconut oil’s fait content. Medium chain fatty acids are connected with a higher rate of weight loss – in fact, subjects in a study who replaced olive oil with coconut oil or palm oil were shown to lose weight at a much quicker rate. These medium-chain fatty acids have also been studied for their efficacy at treating Alzheimer’s, and helping the body absorb nutrients more efficiently.

The rest of coconut oil’s fat composition is made up of a mixture of caproic acid, oleic acid, palmitoleic acid, and linoleic acid. Most of these are short-chain fatty acids.

How does coconut oil improve my diet?

Here’s an interesting piece of trivia. Residents of the South Pacific, who get up to 60% of their total calories – not just their total fat – from the highly saturated fat that is coconut oil – are shown to have virtually non-existent rates of heart disease.