The solution is a new decentralized way of living that bypasses the chokepoints of centralized political and financial power.

I’m going to tell a story here using charts–a story that leads to one conclusion: we need a New American Social Revolution–a peaceful revolution that transforms our understanding of the corrupt, destructive status quo we currently inhabit, an understanding that leads to a withdrawal of our consent of the governed and a national search for new social, political and economic structures that actually serve the interests of the entire citizenry rather than the interests of a self-serving parasitic elite.

Solutions abound outside the confines of the elite-controlled centralized status quo.

The story has three dynamics: energy, debt and money. (If charts leave you cold, just read the short descriptions of the dynamics.)

Here’s the happy story we’re told: economic growth no longer depends on rising energy consumption: our GDP can shoot to the stars while energy consumption continues moving higher at a modest rate of expansion. 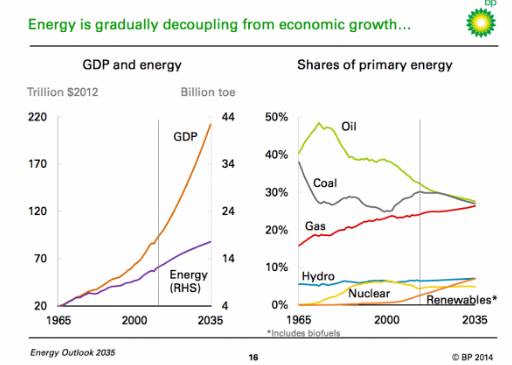 This chart contradicts the happy story that we can grow consumption to the sky using only a bit more energy every year. What the first chart doesn’t show is what we’ve used to grow the GDP–debt, i.e. borrowing from future earnings and future energy consumption. 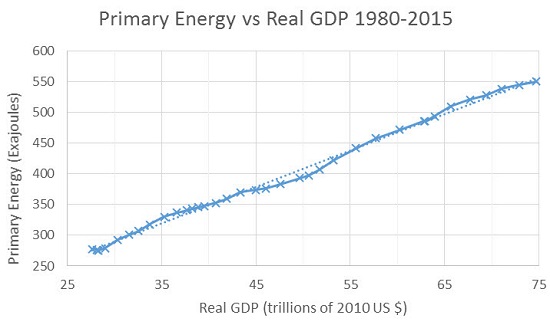 My insightful colleague Lance Roberts of Real Investment Advice published this chart of total system leverage (i.e. the amount of debt piled on actual collateral) that shows leverage is climbing higher while GDP growth declines: the yield on increasing debt and leverage is diminishing rapidly. 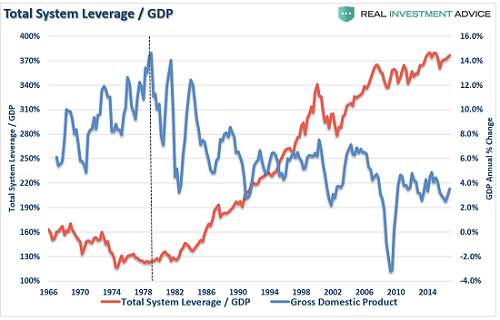 Look at how debt in all sectors–household, corporate and government–has skyrocketed while GDP growth has been weak. Borrowing from future earnings and energy consumption only works when debt and leverage are low. Once the total cost of interest absorbs much of the national income, debt service chokes off growth.

The rising tide of debt and financialization has eroded the share of the economy going to wages for decades. Simply put, financialization takes money out of the wage economy and funnels it to financial elites who are closest to central bank credit spigots.