On June 24, 2017, Stefan Stanford highlighted a very concerning SQ Alert by a member of the trucking industry about the ramifications and total tyrannical control of the government regarding the upcoming ELD Mandate, warning people that the mandate set to begin in December 2017, is all about control and the surveillance state, with the trucking stating “Control trucking, you control every part of this country, and as 1/5th of the GDP, the economy of every part of this country.”

Read the entire alert again here, because ANP has just received another warning, coming from a trucker that would be affected, and a possible trucking shutdown, which we are told “would bring this country to a halt.”

A black swan is an event or occurrence that deviates beyond what is normally expected of a situation and is extremely difficult to predict and generally brings about chaos and strife, and our reader highlights what has been going on in the trucking industry, but has received very little attention in the media, telling us:

“Every one has or is discussing and looking for a “black swan event”. I believe one is right in front of you, and it has gotten little attention, save mention in an article by you and an alert by Steve Quayle. I’m talking about the ELD mandate for trucks. The government is taking total control over the trucking industry under the guise of safety. But their own studies can’t prove a safety increase resulting from this. Its a ruse on the scale of the Patriot act, and Obama care. You know how those worked out.”

“70% of the total tonnage of freight in the US is carried by truck, according to the ATA. There are over 700,000 trucking companies, 98% of them are small carriers with less than 6 trucks according to the fmcsa. The other 2% are the “mega carriers”. A poll by overdrive magazine states that 27% of owner operators and small carriers stated they intend to get out of trucking in December. And another article says carriers across the industry, expect a 15% drop in productivity due to the ELD. As a small carrier owner, these statistics are right in line with my calculations and expectations. Many small carriers will be pushed out of business by that drop, as most opperate on about 12% profit margins.”

That brings that 25+ percentage up to over 44 percent of smaller truckers and lines planning to either get out of trucking or stop long hauls.

To understand how important this issue is to the smaller trucking companies which make up the 98 percent of the 700,000 trucking companies, they went as far as to petition the Supreme Court to overturn a federal mandate on electronic logging devices that track how many hours truckers drive, which was rejected in mid-June.

The petition was brought by the Owner-Operator Independent Drivers Association, who stated “The mandate has everything to do with large, economically motivated entities using the government to impose their will on small businesses which comprise the majority of the trucking industry.” 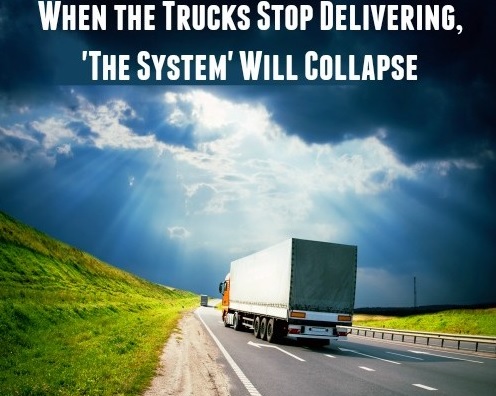 The reader email continues to explain the consequences of so many truckers deciding to retire, or stop their long-hauls:

All of this will result in stortages at every level. Gas stations, groceries, medical, and so on. This will in itself cause price inflation across the spectrum. Now with the lack of available trucks to move all the freight, many loads will sit idle. This will cause many industries to run into supply problems, exacerbate the problem even further. Not to mention the increase in rates for trucks as the battle among shippers to get their loads moved, and the highest bidder wins, causes even more price increases.

Do you see how this is all about to play out.

America’s “just in time” freight system is about to be thrown into complete disarray.

Do you see the black swan yet?

Now, some truckers are beginning to rally together to fight this to the End. But sadly, they are not getting any coverage, other than what I mentioned at the beginning of this. They are being led by country music singer Tony Justice, and are planning a rally in October, and possible shutdowns. A shutdown would bring this country to a halt, Overnight.