If people thought that giving one Tweet from President Trump 28 times more coverage than Congress passing milestone immigration bills, and covering the start of travel ban, then brace yourselves a record breaking freakout over the President’s latest tweet, in where footage from WrestleMania 23 in 2007 where Trump went up against WWE CEO Vince McMahon during a “Battle of the Billionaires” match, has been retouched to show the President body-slamming a figure with the letters “CNN” superimposed over the person’s head, with just two hashtags as the only commentary. #FraudNewsCNN #FNN.

Within two hours of the appearance of that tweet it had been retweeted 90,563 and had been liked 135,00-plus times and MSM coverage of everything else was interrupted as the media once again, for the second time in days, completely and utterly melts down.

In boxing this is called going in for the KO while your opponent is on the ropes. CNN has been on the ropes since early June when they issues a fake story about former FBI director James Comey’s expected testimony, where they had to change their headline after Comey’s prepared statement was released, then CNN was further damaged after having to retract yet another fake news story, offer an apology, delete all links to the story as well as removing it from their site, which resulted in three people connected to the story being forced to resign from CNN. Then Project Veritas issued undercover video showing CNN employees admitting the whole “Russia” storyline that CNN was pushing for the past six months was “bullsh*t” and a “nothingburger.”

Recent speeches by President Trump have brutally highlighted how much fake news CNN and other outlets have been reporting, as he publicly denounced the media at a Faith Rally saying “The fake media is trying to silence us. But we will not let them. Because the people know the truth. The fake media tried to stop us from going to the White House, but I’m president and they’re not,” Trump continued. “The fact is the press destroyed themselves because they went too far. Instead of being subtle and smart, they used the hatchet and the people saw it right from the beginning.”

The media is, of course, unable to acknowledge the not-so-subtle meaning behind the “body-slam” imagery, which is that in the war the media, especially CNN has waged against the President since the day he announced his candidacy, has resulted in Trump body-slamming them to the ground, where their credibility is in shreds as they have consistently reported fake news in an attempt to destroy Trump, with utter disregard for the truth or any type of objectivity.

Mother Jones writer David Corn gets the drama queen award of the day with “This is sick. This is disturbing. This is pathological. This is violent. This is reckless. This is authoritarian.” 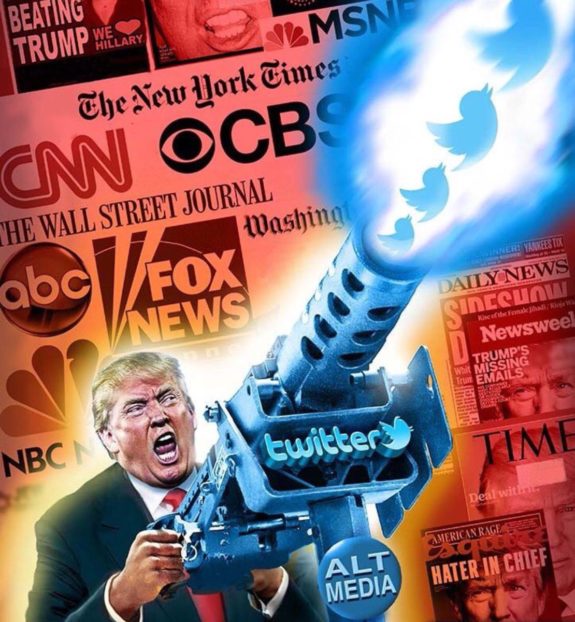 THE DISCONNECT BETWEEN MEDIA, POLITICAL CLASS AND AMERICANS HAS NEVER BEEN SO CLEAR.

Needless to say, Trump supporters on social media found it hilariously funny, while establishment “political class” is horrified that the president just keeps on tweeting, thowing those “shiny objects” around so the media and the rest can all scream “SHINY” and drop everything else to bitterly complain, cry, whine and clutch their pearls.

While the Republican establishment is busy holding their heads in their hands, squeezing their eyes shut, covering the ears with both hands every time President Trump issues a tweet that retaliates against those that have been bashing him, his family, his wife, his supporters, those of us that think “KEEP ON TWEETING, MR. PRESIDENT” just cackle hysterically with each and every meltdown by the very people that attempted to influence and control the populace during the primaries, that worked against the GOP party during the general election, willing to vote for Hillary Clinton rather than the GOP nominee simply because “they” didn’t approve of who “we” chose as the Republican candidate.

Here is a newsflash for all those on the Republican side that bemoan every time Trump tweets something outrageous, YOU are in the minority, as a recent Drudge poll clearly establishes, when the question of “Should president Trump Use Socials”, with two options“tweet” or “delete”, so far has received 260,239, with 75.04% of the respondents voting for Trump to keep on tweeting, and 24.96% saying stop. (Poll is still running, so numbers may fluctuate)  As of writing this, 195,476 Drudge readers want the tweets to continue, compared to 65,000 saying no more.