The Fed Speaks Out of Both Sides of Its Mouth

A number of Federal Reserve policymakers were marched out this week to give opinions about monetary policies following the most recent action of the Fed.

New York Fed Chief William Dudley argued in a speech that he is worried that the jobless rate will fall too far, causing a tight labor market and forcing inflation higher. Dudley believes the Fed should continue to raise interest rates. His talk caused the U.S. dollar to rally, undercutting the oil market.

Chicago Fed president Charles Evans delivered a more dovish outlook, arguing the Fed should hold off further rate hikes until the end of the year.

Boston Fed president Eric Rosengren raised the issue that “monetary policy is less capable of offsetting negative shocks when rates are already low”, implying the Fed wants higher rates, so that when a recession does develop it has room to lower them again.

Right after the Fed raised interest rates, Goldman Sachs suggested the Fed will hold tight in September and not raise rates but will instead begin tapering its balance sheet as it announced and wait until this December before raising them again.

Consequently, the CME now gives the probabilities of a rate hike in September only a 12.8% chance and a 40.3% chance in December.

Between four rate hikes since December 2015 and plunging oil prices, coupled with sinking commercial and industrial loans fast approaching zero, we may start to see evidence of an emerging recession develop by the third or fourth quarters.

Certainly, the Citigroup Macro Economic Surprise Index is warning us a very big surprise is coming our way! 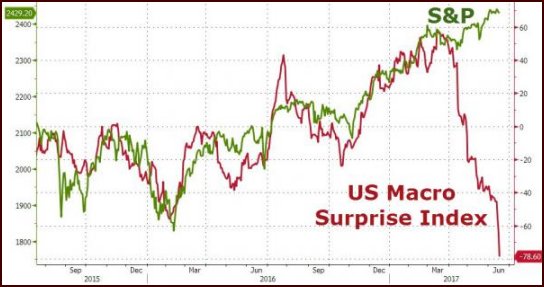 What this index is revealing is that while economists are adjusting expectations downward, the data has been coming in far worse and at a faster pace, while the stock market isn’t adjusting for it. When the money supply is plunging, the economy is going to contract and I figure with another rate hike this disparity is only going to get worse.

The stock market traded basically flat towards the end of the week, which is a bit of surprise given the announcement of the long-awaited health care bill. (Buy the rumor, sell the facts?)

The senators will now have a handful of days to discuss the bill and decide whether to support or vote against the bill. Naturally, the Democrats have blasted the bill, so the question is whether McConnell can get enough Republicans on board with so little elbow room, as he can only lose two Republicans and still pass the bill.

Four conservative Republican senators announced Thursday they oppose the bill in its current version as written. Conservative Senators Rand Paul of Kentucky, Ron Johnson of Wisconsin, Ted Cruz of Texas, and Mike Lee of Utah appear to be politically posturing themselves to bargain makers — so we’ll see where this goes before the 4th of July. 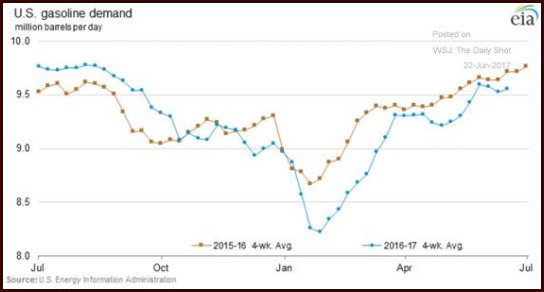 Secondly, notice the seasonal cycle that is so clearly represented here again. The seasonal cycle bottoms in late January and peaks after the 4th of July, with demand falling in the cooler months. As oil prices slide in the winter months, volatility picks up and the stock market becomes vulnerable, impacting the economy. This is why we pay close attention to oil prices and its seasonal cycles. 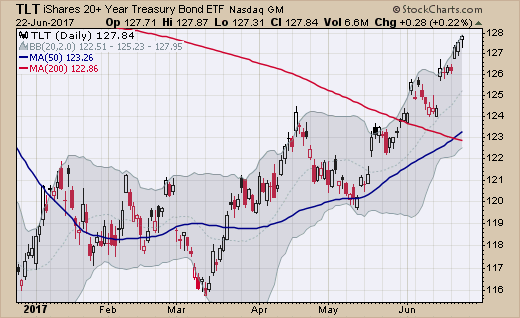 With the frustration of the GOP not being able to get any of the fiscal bills passed but the Fed moving aggressively towards tightening, investors have been moving into U.S. Treasury Bonds.

Speaking of volatility, historically, the Volatility Index (VIX) tends to bottom at the end of June, with a large pick-up after the 4th of July. 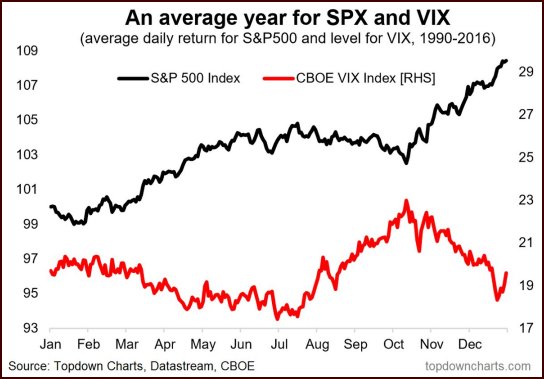 What this illustrates is a historical pattern of volatility risk picking up in the VIX after the 4th of July through mid-October.

Investors should take this risk warning very seriously this year, given the highly overbought state of equities.