Everything points to Congressman Steve Scalise being “Seth Riched”

The developing situation regarding Steve Scalise is VERY Serious!

SOTN has watched with great concern the deterioration of Steve Scalise since he was admitted to the hospital in Washington, D.C.

The whole shooting incident has revealed itself to be fastidiously directed CIA black operation with at least two goals.  As follows:

First, it was a very serious and personal warning to the 3rd ranking member of the House leadership–Rep. Steve Scalise of Louisiana.

Secondly, it was meant to be a warning to every other member of Congress not to buck the Deep State agenda.  They all know exactly what that agenda is.

Special Note:
Steve Scalise was on the ground wounded for a period of time; one congressman said it “felt like an eternity”.  Steve could have been taken out at anytime, but wasn’t.  Message from Deep State: Every single congressman is a sitting duck.  They are not safe anywhere, not even with a security detail in tow as Steve had assigned to him as Majority Whip.  In other words, Deep State owns and operates on every square inch of Washington, D.C.—24/7

Rep. Scalise was a fierce patriot and a true conservative.  His many signature causes show him to be the real deal and arch-enemy of Deep State who was no friend of the RINOs in Congress.

Not only was Scalise the highest ranking elected official from the Tea Party in the U.S. Congress, having attained the position of Majority Whip, he was also a no-nonsense kind of guy.  You know how those real gutsy Italian-Americans can be when they latch onto a righteous cause.

Rep. Steve Scalise: “The House is taking strong action to protect victims of #HumanTrafficking and to bring child predators to justice.”

Well, that righteous cause that Steve has advocated against is human trafficking.  The following video portrays just how strong his advocacy is in this regard.  Which also happens to be the most radioactive issue throughout the USA in light of the Pizzagate scandal blowing wide open just before the election.

VIDEO:  IS THIS WHY REP. STEVE SCALISE WAS SHOT TODAY?

Was the Berniac shooter really a programmed assassin from the CIA’s MK-Ultra Monarch mind control program?

The mainstream media (MSM) did somersaults to project the image of an ultra-liberal, Trump-hating, leftwing nutcase for mass shooter James T. Hodgkinson.

However, the MSM narrative is not stacking up with the most likely reality of the shooting spree.  It appears that Hodgkinson went there to specifically shoot Scalise, the highest ranking Congressman on the ball field.   And the preceding video clearly demonstrates why that is the case—Pizzagate.

PEDOGATE: Pandora’s Box Has Been Opened for Deep State and the C.I.A.

Steve Scalise appears to have further opened this Pandora’s box.  The human trafficking legislation that he was pushing is — by far — the most uncompromising and severe ever to have been floated in the U.S. Congress. 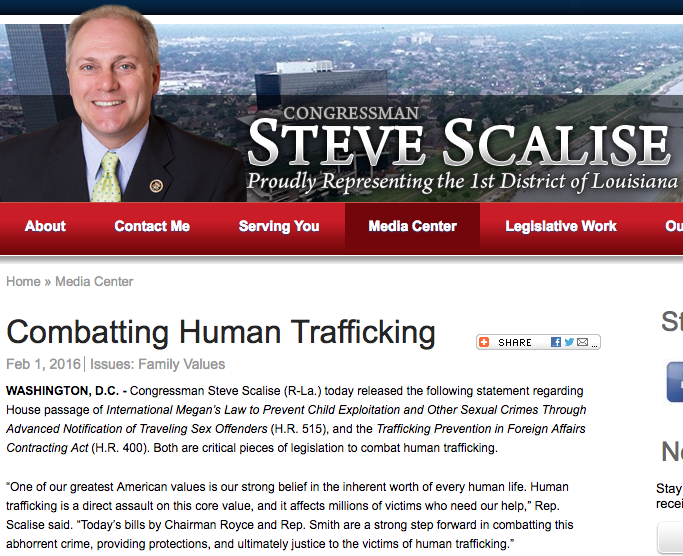 If ever prayer was needed to preserve the life of Steve Scalise, it is right now.  The following report about President Trump’s visit to his bedside indicates why.

Donald Trump: Steve Scalise in ‘Trouble’; ‘He’s Going to Be Okay, We Hope’

Key Point: June 14, 1946 is Donald Trump’s birthday.  He has a special kinship with Rep. Steve Scalise, especially because of their shared political agenda and patriotic orientation.  Just like Kathy Griffin’s beheading video was used to send an extremely threatening message to the POTUS, so was this ‘birthday present’ sent by Deep State—mafia style.  Steve was shot on Wednesday, June 14th.

Truly, Steve Scalise is one of those very few elected representatives at the federal level who deserves our prayers and blessings, love and support.

Members of SOTN staff worked directly on the BP Gulf oil spill.  We found Steve Scalise to be one of the very few congressman who aggressively advocated for an environmentally safe oil spill response.  He expressed genuine concern for the health and welfare of the many residents on the Gulf coastline who were poisoned by the toxic, chemical dispersant—COREXIT.  Steve will always have a special place in our hearts for his awesome advocacy. Rep. Steve Scalise Grills BP CEO Tony Hayward About the Gulf Oil Spill

N.B. The analysis delineated below reflects many of the same conclusions of an independent investigation which we have been conducting at SOTN.  We, too, strongly believe that Steve was sent to the Washington Hospital Center to expose him to the same bad actors who killed Seth Rich.

The following is going to have to stay top posted until tomorrow, because it is VERY important.

CONFIRMED: SCALISE IS AT THE SAME HOSPITAL THAT TOOK OUT SETH RICH

Here is the confirmed information many are looking for, as it turns out I had this and did not think of it until now.

This clinches it, the Washington Hospital Center appears to be where people go when they are supposed to die.

SCALISE WAS DEFINITELY BEING SETH RICHED

Trump responded to this by sending his own white house doctor to oversee Scalise. AND WHAT HAPPENED THEN? CNN and other commie news outlets flipped out, and started shredding Trump for sending a doctor he trusts to oversee Scalise! It does not take a huge brain to figure out why!
Here’s why: If Scalise went from fair to critical condition, someone who wanted him dead caused it, just like Seth Rich. And someone at CNN knows the plot, and that Scalise was sent to that hospital to die. And now, because Trump sent a doctor that is not there to kill Scalise, CNN can’t handle it and is whining and moaning about it. And if Scalise died, there will be a real doctor right there, to say it was caused by foul play.
I believe Scalise was sabotaged during the surgery, which was botched on purpose to kill him. That’s the only way digging a bullet out of a hip is going to put someone who was perfectly stable and in fair condition, into critical condition. You can’t go from fair condition to critical condition like that. It just does not happen. He’s being Seth Riched NO IFS OR BUTS. Scalise was a good guy. He was one of us. Let’s hope Trump’s appointment of a trustworthy doctor saved him.

Source Link – State of the Nation