Two giant ships of oil were just seized by government officials in Panama and South Africa. They came from Saudi Arabia.

In all likelihood, several more shipments will be seized.
And the world may stop accepting Saudi oil altogether.

The price of oil has doubled in hours. Investors who saw this coming
and correctly positioned themselves are reaping the profits.

None of that happened… at least with oil.

But it is happening with another critical resource you never think about: phosphate. Which is crucial to the global food supply.

A few weeks ago, a shipment of 54,000 tonnes of phosphate was seized in South Africa. Officials say it was illegally mined in the Western Sahara and was on its way to New Zealand.

The single shipment accounts for 13% of New Zealand’s annual phosphate needs. To make up the difference it will bring in other phosphate shipments to keep farmers supplied.

Right after that, another phosphate shipment was seized. That one was headed to Agrium (NYSE: AGU) in Canada. The Danish vessel carrying it was seized in the Panama Canal under suspicion of being mined by the Moroccan government in the Western Sahara, which it has under military control. 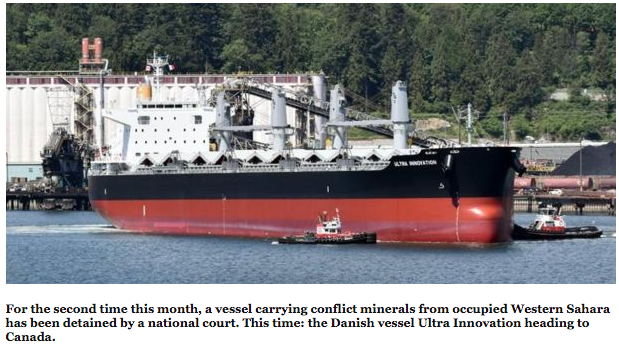 It’s long been known that large fertilizer companies like Agrium and Potash (NYSE: POT) have sourced phosphate from the geopolitically sensitive Western Sahara. It seems that situation may now be coming to a head.

Make no mistake: This area of the world is 4X more important to phosphate than Saudi Arabia is to oil.

And yet you hear nothing about it.

Serious supply and jurisdictional challenges are mounting in the phosphate industry. Two shipments have been seized. More seizures are likely.

There will be reverberations. And I expect them to be positive for Arianne Phosphate (TSX-V: DAN)(OTC: DRRSF), which has a fully permitted, high-quality phosphate project right here in safe North America.

It will be a mine because the world needs to eat.

And it will eventually be valued much higher than it is today — sooner rather than later if these geopolitical tensions persist.

After sliding from C$1.20 to C$0.70 over the past year, Arianne seemingly reached a point where it was simply undervalued.

It tested the low C$0.70s in December 2016 and again early this year, and has bounced off that level each time.

The company owns arguably the best undeveloped phosphate asset in the world. It’s high-grade, premium hard rock that fetches a premium in the market. It’s in a safe jurisdiction. And it’s fully permitted and ready to go.

Until recently, the company was in the so-called “boring” stage of development where it was getting final permitting and putting all the pieces in place in the background to make a go of putting the Lac a Paul project into production.

But now things are heating up. In the last few months, Arianne has brought on a series of some of the highest-quality firms in the world to assist with consulting, financing, engineering, infrastructure, and construction, including Rio Tinto, Hydro-Quebec, Constructions Proco, ABB, SNC-Lavalin, and Cegertec.

It’s also signed a memorandum of understanding with FLSmidth, a world leader in phosphate processing technologies globally, to provide all production equipment and engineering for the future plant.

The quote from CEO Brian Ostroff is spot on:

“The process of bringing Lac a Paul into development and unlocking the enormous economic value for our shareholders and stakeholders continues to move forward. This is not just Arianne alone anymore and, when taken in conjunction with other recent announcements that have involved major global players, one can see the interest by many in getting this project done.”

Not only do Arianne and its world-class partners want the project done, so does the government of Quebec because of the jobs and other economic benefits it will provide.

The stock trades with just a C$88 million market cap — just 3% of the net present value of the project it 100% owns.

I think the market is simply unaware, or has forgotten, about the asset. That would have been easy to do over the past few years given the wider concerns over the agriculture market in general.

But the world will always need to eat. And the phosphate market in particular is important for that. Plus, many of the world’s phosphate assets are in unstable regions.

The market will come to value Arianne properly.