Understanding the Geopolitics of Terrorism

The latest in a long series of bloody terrorist attacks attributed to the Islamic State of Iraq and Syria (ISIS) unfolded in Iran early Wednesday with coordinated armed assaults on the Iranian Parliament (Majlis) and the mausoleum of the late supreme leader of the Islamic Republic, Imam Khomeini. At least 12 people were killed and 43 wounded.

The reactions of the US government and the Western media to the attacks in Tehran stand in stark contrast to their response to the May 22 bombing that killed 22 people at the Manchester Arena and the London Bridge attacks that claimed nine lives last Saturday.

The Trump White House released a vicious statement that effectively justified the killings in Iran, declaring,

“We underscore that states that sponsor terrorism risk falling victim to the evil they promote,” an attitude that found its reflection in the relative indifference of the media to the loss of Iranian lives.

It is clearly understood that terrorism against Iran serves definite political aims that are in sync with those of US imperialism and its regional allies. 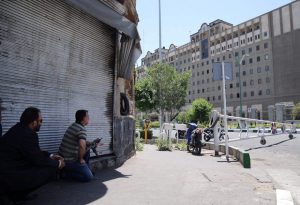 Members of Iranian forces take position during an attack on the Iranian parliament in central Tehran, Iran, June 7, 2017. Omid Vahabzadeh/TIMA.

For its part, Tehran’s reaction to the attacks was unambiguous. It laid the responsibility at the door of the US and its principal regional ally, Saudi Arabia.

“This terrorist attack happened only a week after the meeting between the US president (Donald Trump) and the (Saudi) backward leaders who support terrorists,” Iran’s Revolutionary Guard Corps (IRGC) said in a statement, published by Iranian media.

The attack was understood in Tehran as a political act carried out in conjunction with identifiable state actors and aimed at furthering definite geostrategic objectives.

The same can be said of the earlier acts of terrorism carried out in Manchester and London, as well as those in Paris, Brussels and elsewhere before them.

The Western media routinely treats each of these atrocities as isolated manifestations of “evil” or religious hatred, irrational acts carried out by madmen. In reality, they are part of an internationally coordinated campaign in pursuit of definite political objectives.

Underlying the violence on the streets of Europe is the far greater violence inflicted upon the Middle East by US, British and French imperialism, working in conjunction with right-wing bourgeois regimes and the Islamist forces they promote, finance and arm.

ISIS is itself the direct product of a series of imperialist wars, emerging as a split-off from Al Qaeda, which got its start in the CIA-orchestrated war by Islamist fundamentalists against the Soviet-backed government in Afghanistan. It was forged in the US war of aggression against Iraq that killed close to a million Iraqis, and then utilized in the 2011 war to topple Libya’s leader Muammar Gaddafi. Fighters and arms were then funneled with the aid of the CIA into the war for regime change in Syria.

The latest round of terror has its source in growing dissatisfaction among Washington’s Middle Eastern allies and its Islamist proxy forces over the slow pace of the US intervention in Syria and Washington’s failure to bring the six-year war for regime change to a victorious conclusion.