Wal Mart Free-For-All A Taste Of Things To Come? These Maps Show Us American ‘Danger Zones’

Wal Mart Free-For-All A Taste Of Things To Come? These Maps Show Us American ‘Danger Zones’ by Stefan Stanford – All News Pipeline

In the new story over at Survival Dan called “During The Collapse: Where To Go And What Places To Avoid”, he reports that when IT hits the fan, America’s ‘population hubs’ will likely explode with violence, looting and the total breakdown of law and order as resources become next to impossible to get and the masses suddenly realize the government isn’t coming to save them.

Whether that be via total collapse, WW3 coming home to roost upon US soil or a ‘grid event’ that leaves tens to hundreds of millions either without power or access to the money in their bank accounts, the video directly below from a Wal Mart in Mexico gives us a very small taste of what that world without law and order can quickly devolve into.

Showing what happens when suddenly ‘lawless people’ realize that there aren’t enough security guards in a Wal Mart store to stop them, we witness the kind of all-out ‘free for all’ that we’ll likely see in a collapse event, though the smart people would be carrying out food, toilet paper and other necessities instead of flat screen TV’s. And in an all-out SHTF event, we’d expect that the people will likely be fighting with each other for the few remaining resources as they are now in Venezuela where children are literally starving to death.

Much more below including a warning from Alt Market’s Brandon Smith that ‘a full spectrum crisis is about to take place’ and more signs that what we’re witnessing in Venezuela may be coming to America. We also take a look at several different important maps which show us where we don’t want to be in full-scale SHTF but first, a Wal Mart in Mexico gives us a small glimpse of what might happen here once it all comes crashing down.

As commenters on the live leak video clearly point out, we’ve already witnessed events in America similar to what happened in the video above with packs of roving gangs showing up in malls and convenience stores ‘en masse’, taking whatever they want and parading out as if laws don’t matter to them. Knowing such events are already taking place in 2017 America, how much worse might things get when SHTF? As Susan Duclos reported this morning on ANP, parts of America are already a boiling cauldron read to boil over. How many Americans are the frogs in the simmering water?

In this December 2016 story on ANP called “Map Shows Us Where We Don’t Want To Be When It All Turns Ugly”, we reported that nearly 50% of Americans live in very small geographical locations. According to this story from the Daily Mail, half of the US population live within 146 counties while the other 157 million are scattered across the other 3,000+.

The map seen directly below gives us a visual representation of what that looks like with the counties seen below in blue making up approx. 50% of the US population while the remaining 50% of Americans live across the rest of the country in counties seen in gray. When SHTF, does anyone want to be in the blue areas? 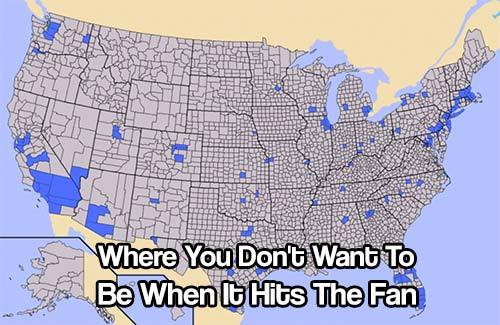 As we also reported back in December, the map seen above showing the US counties with the biggest populations coincides quite eerily with the map of US counties won by Hillary Clinton during the last election seen below.