War Pigs and other Animals Threatening the World

War Pigs and other Animals Threatening the World by Rory, The Daily Coin

How would feel if Russia’s parliament passed a bill stating that Russian warships would inspect any and all ships coming into port in Mexico and Canada? Would this seem a little odd? This is exactly what the warmongers in the cesspool of U.S. House have just passed.

If you haven’t read “What the N. Korea “Crisis” is Really About” what Russian Senator Kosachev is saying ties perfectly into what Dr. Roberts is saying. When you have two people on opposite sides of the globe saying the exact same thing about the exact same situation, it could be important.

Here is the Russian Senator’s take on what these war pigs in Washington DC are attempting to do.

A US House of Representatives bill establishing control over the Russian Far East ports envisions a show of force and thus amounts to a declaration of war, the chairman of the Russian upper house of parliament’s international committee told Sputnik.

“This bill, I hope will never be implemented because its implementation envisions a scenario of power with forced inspections of all vessels by US warships,” Konstantin Kosachev said Friday.

His comments follow the reported passage on Thursday of a House bill enhancing sanctions against North Korea, outlining “inspection authorities” over Chinese, Iranian, Syrian and Russian ports. The latter include the ports of Nakhodka, Vanino and Vladivostok.

“Such a power scenario is beyond comprehension, because it means a declaration of war,” Kosachev underscored.

Dr. Roberts sees, not only what is happening with the passage of this bill, but the whole “N. Korea is a threat” meme as a set up for a first strike against both Russia and China!! Are you serious?!

What the N. Korean “Crisis” Is Really About

So what is the demonization of N. Korea by the presstitutes and Trump administration about?

Washington claimed that the anti-ABM bases were not directed at Russia, but were for the protection of Europe against Iran’s nuclear ICBMs. Insouciant Americans might have believed this, but the Russians surely did not as Iran has neither ICBMs nor nuclear weapons. The Russian government has made it clear that Russia understands the US bases are directed at preventing a Russian retalliation against a Washington first strike.

The Chinese government also is not stupid. The Chinese leadership understands that the reason for the N. Korean “crisis” is to provide cover for Washington to put anti-ballistic missile sites near China’s border.

In other words, Washington is creating a shield against nuclear retalliation from both Russia and China from a US nuclear strike against both countries.

Not only does this place the U.S. squarely in the crosshairs of both Russia and China it puts the world in danger of having some very unstable people controlling the fate of the millions, not only in Asia but right here at home. Russia has already warned the U.S. that we would not be spared if there is another major war – bombs would hit American soil.

As reported by the Daily Star with a map provided by

Moscow is estimated to possess 4,490 nuclear warheads compared with 4,500 in the US.

Daily Star Online can reveal which US states would be vapourised if World War Three were to break out.

The black dots show where nuclear hell would be concentrated if Russia were to launch a preemptive strike with 2,000 warheads.

The purple dots show the regions that would be struck if Putin were to rain 500 nukes on the US. 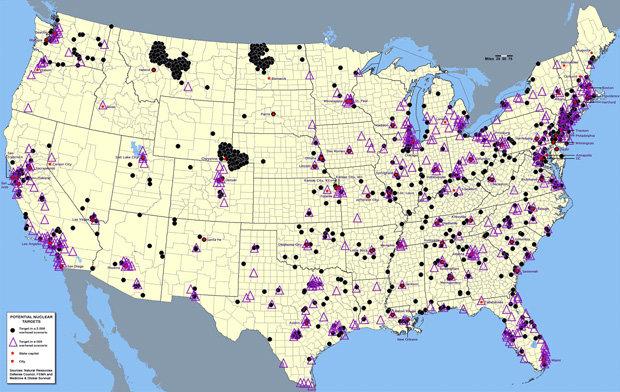 CBS – MAPPED: Where Russian nukes would hit in the event of nuke war

Who would actually “win” if nuclear bombs started flying around? If you review the map above it becomes more than clear that even half of the strikes were to happen there would be only small portions of the U.S. that would be habitable for thousands of years. The U.S., Europe and Asia would become vast waste lands. Is that “winning” by any standard of measure?

These maniacs are playing with our lives and our world, but seem to have little regard for anything other than their power and profits. If the worst case scenario were to play out what would be left for these power hungry crazies to rule over?