The CME Extends The Paper Fraud To The Coin Market

The CME Extends The Paper Fraud To The Coin Market by Rory, The Daily Coin

On April 11th, the CME and England’s Royal Mint announced that they were testing a blockchain-based platform for trading gold. The product to be traded is a new crypto-coin called, Royal Mint Gold (“RMG”). The token will be issued by the Royal Mint and will represent the digitized version of 1 gram of gold. The gold will be stored in the Royal Mint’s vaults.

This news announcement, which was reported by The Daily Coin “CryptoGold and Thieving Banksters” certainly caught our attention. The fact that the CME is involved is enough to shine the light of truth on precious metals trading and ownership. This is because the concept of a “new alternative way to trade gold” is an extension of the “fractional gold and silver bullion market” that is driven by the paper derivative precious metals products traded on the Comex and the LBMA.

The truth is that this new “blockchain-based” technology is nothing more than a mechanism to divert investor money away from taking delivery of actual physical gold and silver in the form of Royal Mint bullion coins and LBMA bars, thereby removing the availability of physical gold and silver that can be used for hypothecation. Furthermore, the new product is an extension of the institutional-level fractional bullion system that utilizes Comex/LBMA paper gold and silver contracts in order to fabricate the illusion that the buyers of those contracts have purchased legal ownership the underlying bullion bars. Below is an excerpt from the Royal Mint’s website which promotes the new concept:

RMG®, an innovative new product launching in 2017, will provide the investment performance of the London Gold Market with the transparency of an exchange-traded security. RMG holders will negate counterparty risk, by having direct ownership of physical gold bullion where each RMG represents ownership and full title to 1g of physical gold bullion held in the form of fully allocated, LBMA Good Delivery Bars within The Royal Mint’s vault.

We believe these features, coupled with the guarantee of zero ongoing annual management fees and free storage, represents one of the best and cost-effective ways to invest in physical gold today. At any time RMG can be redeemed for physical gold bars and coins produced by The Royal Mint, with physical delivery.

The basic tenet of the RMG is that “counter-party” risk is eliminated because the buyers are purchasing direct ownership of gold that is stored in the Royal Mint’s vault. However, the idea of custodial possession – where the owner trusts the safe-keeping of an asset with 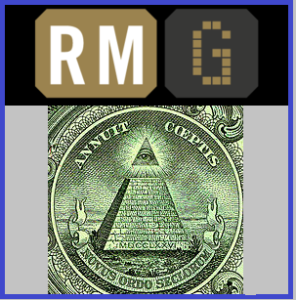 a third party – is in and of itself a primary source of counter-party risk. The first law of ownership of gold is that you do not fully “own” it until it is in your personal possession. Just ask the German Government.

The second myth in that statement above by the Royal Mint is the gold is held in the form of fully allocated LBMA Good Delivery Bars (in the Mint’s vault). This is GLD’s holy grail claim as well. The problem, again, is accountability. Until gold custodian’s are willing undergo a fully independent 3rd party audit at any time and without advance notice, it’s silly to assume that these custodians possess full, legal title to the gold they are reporting to be in their vaults. The poster-child example is the U.S. Federal Reserve, which has spent millions to avoid the prospect of a legally enforced audit of its gold vaults by a third party, fully independent auditor.

The Shadow of Truth discusses this new mechanism of deceit in today’s podcast and we explain why it’s riddled with counter-party risk and the potential for fraud on the same scale as Comex and LBMA gold and silver derivative products.