The new story over at the Daily Mail today reports North Korean dictator Kim Jong Un smiled and waved as a cheering crowd watched a simulation of a US city being wiped out by a North Korean nuclear attack. You can see that video as the final video below. Just the latest provocation proving the ‘mad dictator’ is out of his mind, and more than willing to sacrifice the lives of the North Korean people, one North Korean defector recently stated Kim will stop at nothing to nuke the US as a ‘last stand’.

With the world on the edge of a nuclear war that could begin at any time according to the North Korean foreign minister in this story from The Sun that the Drudge Report linked to on Monday morning, we take a look within this ANP story at this recent story from JD Heyes over at Natural News called “If Nuclear War Breaks Out, Which US Cities Would Be Targeted First?” and all of the latest news from around the world that shows us we may be closer to nuclear war now than at any time since the Cold War.

While most military experts believe that a war with North Korea would be ‘won’ by the US, those same experts warn that North Korea could do an incredible amount of damage to the US and as the Natural News story reports, striking American cities would have a multiplying effect. According to China, perhaps even more correctly, in such a war, nobody would win.

For cities that were spared, residents would no doubt panic, leading to widespread chaos and even more death and destruction. Smaller cities of 1 million, 500,000, even 100,000 people would quickly degenerate into mayhem as the national government fought mostly to save itself – though a strike on Washington, D.C., would most assuredly take out the bulk of the federal government. Even a single nuclear strike could cause widespread pandemonium in American cities that were not targeted.

While we’ve been ever so fortunate here in America to have long avoided an all-out war upon US soil, NKorea has also recently warned that “If the USA is planning a military strike against us, we will react with a preemptive nuclear strike!” as also heard in the 1st video below. Also claiming that they’ll be conducting more missile tests on a ‘weekly, monthly and yearly basis’, North Korea’s Vice-Foreign Minister Han Song-ryol warned that an “all-out war” would result if the US took military action.

While many believe that North Korea’s missiles couldn’t strike most of the US if launched from Kim’s ‘hermit kingdom’, this new story from Zero Hedge claims the potential range of North Korea’s current weapons, particularly the KN-14 and KN-08 missiles, would put most of the US and the world within range as seen in the next graphic below. 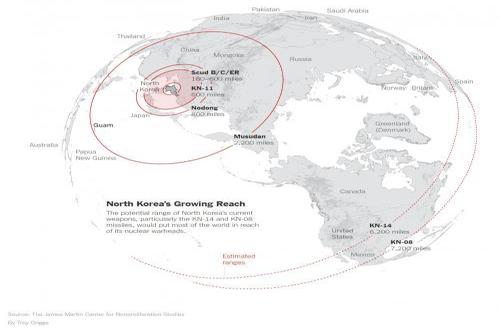 And as we reported on ANP back on April 14th, North Korea’s traditional nuclear weapons may not even be the biggest problem and threat that America faces. Warning that NKorea still has at least ‘3 aces in the hole’, while a North Korean nuclear strike upon the US would be beyond devastating, an EMP attack launched upon our country could quite literally ‘take down all of America at once’. And as we’ve been warned, such a devastating attack would only need one strike to be successful while NKorea ‘taking out’ 17 different cities would require at least 17 successful attacks.

Yet we come back to the Natural News story‘s warning: Even a SINGLE nuclear strike could cause widespread pandemonium in US cities all across the country. While US cities make up less than 4% of the country’s land mass, they are home to 62.7% of the total US population according to this March 4th, 2015 US Census Bureau story. If the ‘snowflakes’ in America are troubled now by the lack of ‘safe spaces’, war upon US soil could instantly lead to NO ‘safe spaces’ unless you’re headed ‘underground’, and even most UG bunkers wouldn’t be completely ‘fail safe’ should war upon US soil lead to a forthcoming ‘invasion of America’ such as that warned of by Pastor Henry Gruver. 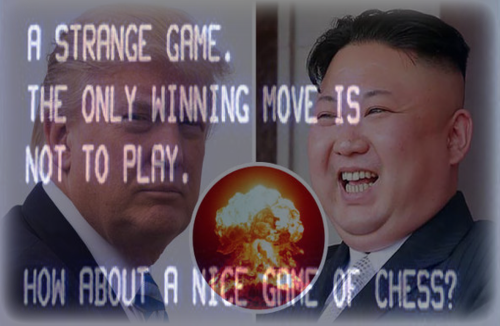 Below videos, we take a look at a new SQAlert which asks if Gruver’s prophecy is now coming true with an alleged warning that the nation of Mexico may be allowing North Korea to use its ports and bays for an attack upon America in exchange for parts of the Southwest being returned to Mexico should NKorea pull off a miracle and win a war against the US. While we’re unable at this time to confirm that this warning is true, it’s been reported time and again that Mexico is seeking ‘reconquista’, the ‘reconquest’ of the parts of America that were once Mexico.

As we’ve previously reported on ANP, Gruver had a vision of the invasion of America and its total destruction by the hands of the Russians and the Chinese. For those who may have missed it, the third and fourth videos below are Gruver’s interviews with Steve Quayle in which they discuss his open vision of a nuclear strike by Russia on the East and West coast’s of the United States in a two-part interview.