A ‘River Of Blood’ Flows Through April

A ‘River Of Blood’ Flows Through April As We Arrive At ‘The Killing Season’ – Will 2017 Continue This Horrifying Trend Or Has The World Learned From The Past? by Stefan Stanford – All News Pipeline

TDC Note – According to Ken Schortgen, Historian, Author and publisher of The Daily Economist, this decade – the second decade of a new century – is the decade with the most chaos, political change/uprising and wars throughout most of history. If you haven’t listened to the interview we recently conducted with Ken, you really should – Click here – combine this fact with April being one of the worst months in the year and the next 3 years could be extremely volatile. Got preps?

According to the new story from Vice, ‘the third week of April is a very scary time for America’. Reporting that the 7-day period that starts on April 15th has been the setting for well more than its fair share of America’s worst tragedies in history, we take a brief look within this story at the events that have happened through American history during this weeklong period while looking at whether the third week of April of 2017 could continue that pattern.

We’d first like to send out a message of love and healing to the family of former Baltimore Raven and Phoenix Cardinal NFL player Todd Heap of Mesa, Arizona. In a heartbreaking story, we’ve learned Heap accidentally ran over and killed his 3-year old daughter on Friday. Truly putting everything into proper perspective, we are so blessed here in America despite the many problems our nation faces. Glory be to our Father in Heaven for the many blessings He has bestowed upon us.

While the 7-day period of April 15th to April 21st covers less than 2% of the year, the author of the Vice story proclaims  way more than two percent of America’s worst catastrophes fall in this little time window. Detailing 14 ‘horrors and horror-adjacent events’ from past third weeks of April, their story left out many events and as we learn more below, April’s many woes have long been spread out across the planet.

April 18th, 1906, the San Francisco Earthquake struck, leaving over 3,000 dead and the 2nd worst natural disaster in US history.
April 14th and 15th of 1911 saw the sinking of the Titanic which left 119 Americans dead.
April 16th of 1947 saw the Port of Texas City explosion, an explosion that left at least 581 people dead.
April 17th through the 19th of 1961 saw the Bay of Pigs Invasion, an operation that failed spectacularly and left Fidel Castro a hero.
April 18th of 1983 saw the US Embassy bombing in Beirut leave 63 dead and 17 injured Americans.
April 16th through the 19th saw the Elijah, Missouri siege.
April 18th of 1992 saw the beginning of the Ruby Ridge standoff.
April 19th, 1993 was the day of the Branch Davidian fire in Waco, Texas that led to 76 deaths when the FBI attempted to raid the facility.
April 19th, 1995 was the Oklahoma City bombing, killing 168, and the deadliest act of domestic terrorism whether a ‘false flag’ or not.
April 20th, 1999 was the Columbine Massacre, where 15 people died in that horrific school shooting.
April 16th, 2007 was the Virginia Tech shooting in which 33 people died in the 2nd-deadliest single-shooter incident in US history.
April 20th, 2010 was the day of the BP oil spill which led to 11 immediate deaths and the worst environmental tragedy in US history.
April 15th, 2013 was the Boston marathon bombing which led to 6 deaths.
April 17th, 2013 was the Texas fertilizer plant explosion in which 15 people died in an incident that was overshadowed by what happened in Boston just days earlier but nonetheless happened 66 years and one day after the 1947 Port of Texas City explosion.

Why have there been so many ‘events’ during this short period of time? It was not lost on the author of the Vice story that April 20th was also Adolf Hitler’s birthday and certainly knowing that some of the events of ‘April’s past’ weren’t caused by man may add a ‘supernatural element’ to all of this.

According to this April 4th of 2016 from the Washington Post, mass-murder researchers and terrorism experts do not like turning their calendars to April. For them, it marks the beginning of what one calls “the killing season.” The same experts also believe that the change in the weather might have something to do with all of this…or maybe not.

Certainly more people are getting outside and getting about in April but they see even more of that during the summer months of June through September, so what is it about April, and particularly the third week of April? Are all of these ‘bad things’ happening this time of year just a coincidence or something much, much more? 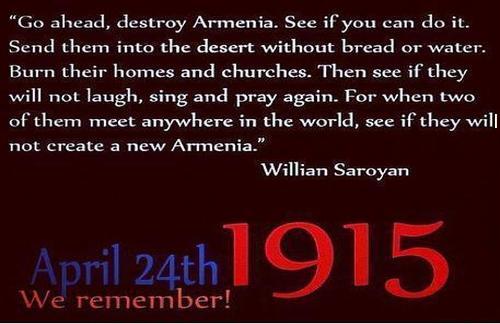 The April 24th, 2015 story over at Newsweek reports this ‘trend’ goes beyond just the 3rd week of April and consumes the entire month of April and as we see in their report, it’s not just the US that has traditionally suffered this month.

April 24th of 1915 was the beginning of the Armenian Christian genocide, where between 1.5 and 2 million Armenian Christians were brutally slaughtered. For those who haven’t heard about that brutal slaughter, the final video below is a difficult to watch documentary about what happened back in April of 1915. April 16th of 1944 saw 430,000 Jews deported from Hungary to Auschwitz, were most were brutally murdered upon their arrival. On April 17th of 1975, the Khmer Rouge captured Phnom Penh, the capitol of Cambodia at which time they began their program of extermination. On April 5th of 1992, the Bosnian war began while on April 6th of 1994, the Rwandan genocide began leading to the deaths of 800,00+.

A line of blood runs through (April) in modern history: from the deserts of Namibia and Syria to Auschwitz, Cambodia, Rwanda, Bosnia and now back to Syria. “The perpetrators,” says Khatchig Mouradian, co-ordinator of the Armenian Genocide Programme at Rutgers University, “repeat history precisely because they have learned from the past.”

Might April of 2017 bring us more of what we pray is avoided? This April 15th story from The Times Of Israel reports Russia, Iran and Syria have warned the US of ‘grave consequences’ should the US continue to carry out missiles strikes against the Assad regime. China has also recently warned that ‘storm clouds are gathering’ in the US/North Korean standoff and as the Daily Mail reported yesterday, Kim Jong Un knows that he can’t win a war against the US but might prefer ‘national suicide’ over the humiliation that would come by him backing down.