When China’s President Xi Jinping visits Florida to summit with President Donald Trump in just days on Thursday and Friday, we can be sure that North Korea and potential loose-cannon dictator Kim Jong Un will be on the minds of many after Trump warned the US will act alone on North Korea if China fails to assist us.

Claiming “if China is not going to solve North Korea, we will”, Trump has made it clear that that the NKorean dictator won’t be dealing with the United States of the past which announced its time and intention to strike in the Middle East during the Obama administration, allowing those they intended to obliterate to get out before ‘the event’.

Claiming he had ‘great respect’ for Xi and ‘great respect for China’, Trump further recently warned things could either turn out well for everybody or things could turn out not so well for anyone: “China has great influence over North Korea. And China will either decide to help us with North Korea, or they won’t. And if they do that will be very good for China, and if they don’t it won’t be good for anyone.”

As NBC recently reported after a meeting with a high-ranking North Korean defector with ties to the NKorean dictator, “the world should be ready” as the ‘desperate’ dictator is prepared to use nuclear weapons to strike the US and our allies. Yet their warning that Kim is preparing to use long-range missiles to strike the US and deliver a horrific nuclear attack upon us rings hollow. While such an attack would be absolutely devastating to the US, it could be so much worse and NKorea is already prepared to take all of America down at once…and they’ve already practiced doing so. 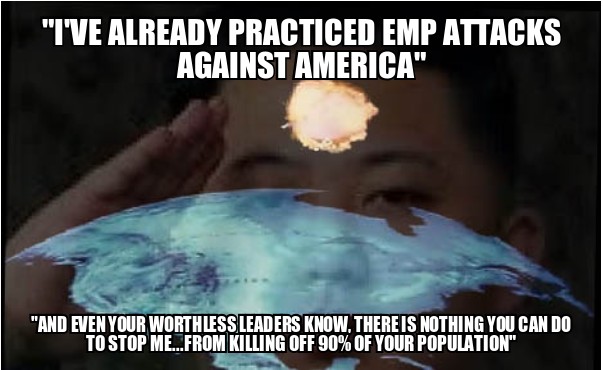 In this August 19th, 2014 story from Voice of America news they reported the United States was defenseless against a North Korean EMP threat and NKorean dictator Kim Jong Un had already practiced EMP attacks against us. They quoted Dr. Peter Vincent Pry in that story who warned NKorea practiced an EMP strike against the U.S. in 2013 when it orbited a satellite at the optimal altitude and trajectory to carry out such an attack.

And while the mainstream media continues to call any EMP threat to America by NKorea ‘fake news’, the fact that NORAD moved their most sensitive equipment back to their Cheyenne Mountain bunker back in 2015 helps prove they know EMP is a very real threat. While NORAD’s 2015 move didn’t specifically reference NKorea, it’s clear by events unfolding in 2017 that NKorea poses one of the biggest foreign policy and national security challenges that President Donald Trump faces.

The recent story headlines from across the internet include:

‘Win Tonight’: Men and Women at South Korean Base Poised for War 24/7

All options are on the table with North Korea. But for China and the U.S., all the options are bad

With this ‘kicker’ coming to us from CNBC just hours ago which helps prove China will likely be no assistance.: 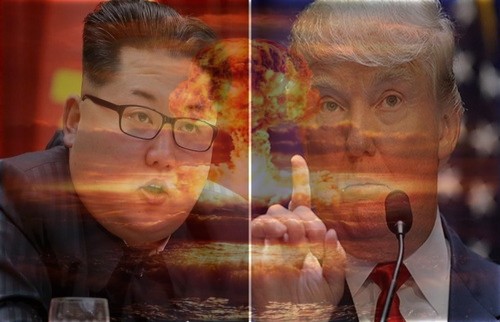 Does President Trump have a red line when it comes to North Korea? While nearly the very last thing that we or anyone  should want to see is North Korea turned into a nuclear wasteground and the poor and mostly innocent North Korean people turned to dust, those who still don’t understand the threat Kim and NKorea pose to the US wrongly argue we should never go the ‘nuclear route’. “The world must deal with NKorea as they are, not as we wish they would be”.