While Stefan Stanford touched on some very troubling aspects of the recent WikiLeaks document dump on the CIA and their spying tools in his most recent article, looking back at the Obama administration’s claims that “Russia” hacked the election, influencing voters for an outcome Obama himself fought against, claiming that the intelligence community had evidence (which they never produced) of Russia’s cyber “fingerprints,” Wikileaks may have just exposed what may very well be a huge “false flags,” carried out by the CIA, with the help of the mainstream media,  against Americans.

A simple search using any search engine brings up literally hundreds of pages of MSM reports discussing the 2016 election, how Russia’s “fingerprints” were all over it, but Washington Post consistently cited “CIA” sources for their bombshell “news”, such as one from December 2016 titled “Secret CIA assessment says Russia was trying to help Trump win White House,” with each story automatically assuming that Russia influenced the election because the intel community said so, because they traced it all back to Russia’s cyber fingerprints. (Note that WAPO never offers a disclaimer informing their readers that WAPO owner Jeff Bezos has ties with the CIA via a $600 million contract.)

It wasn’t just the Washington Post that reported “Russian” interference as if it were a foregone conclusion, but all the mainstream media did so, citing unnamed U.S. officials claiming “Russian ‘digital fingerprints’ all over election hacks,” with the following quote from Fox 8(citing a CNN report) being representative of the consistent reporting since the November election:

One official told CNN the administration has traced the hack to the specific keyboards — which featured Cyrillic characters — that were used to construct the malware code, adding that the equipment leaves “digital fingerprints” and, in the case of the recent hacks, those prints point to the Russian government.

At the same time that the CIA led intel community was asserting Russian “fingerprints” were all over the election, Washington Post dropped another bombshell (which they changed, added a correction, then followed up by writing another article which basically retracted the fake news” story some “intel” official fed them) claiming Russia hacked into the U.S. power grid!

Once again, they claimed that “A code associated with the Russian hacking operation dubbed Grizzly Steppe by the Obama administration has been detected within the system of a Vermont utility, according to U.S. officials.”

The initial story was quoted all over the Internet, the retraction in the subsequent article was mostly ignored by those that jumped on the “Russia hacked the grid” story, and once again, the pattern that has been used throughout the past months was an “unnanmed source” found “Russian code,” which of course allows them to conclude “Russian fingerprints”, meant Russia was responsible.

Part of the WikiLeaks “Vault 7: CIA Hacking Tools Revealed,” includes a specific section they highlighted on their Twitter page, detailing a program called “UMBRAGE” which exposed that the “CIA’S Remote Devices Branch’s UMBRAGE Group collects and maintains a substantial library of attack techniques ‘stolen’ from malware produced in other states including the Russian Federation. With UMBRAGE and related projects the CIA cannot only increase its total number of attack types but also misdirect attribution by leaving behind the ‘fingerprints’ of the groups that the attack techniques were stolen from.” 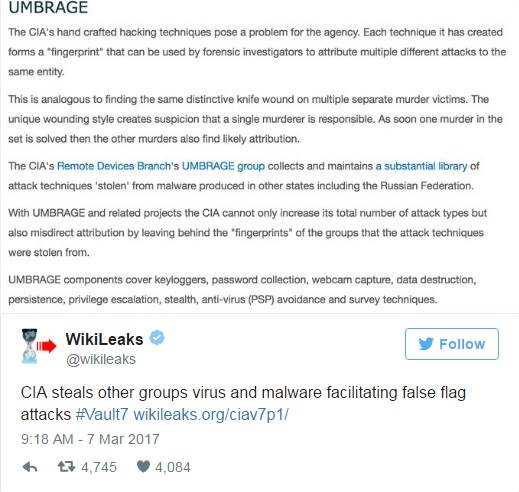 On March 5, 2017, one day after President Trump accused the Obama administration of of tapping his communications before the election, Trump tweeted “Is it true the DNC would not allow the FBI access to check server or other equipment after learning it was hacked? Can that be possible?” 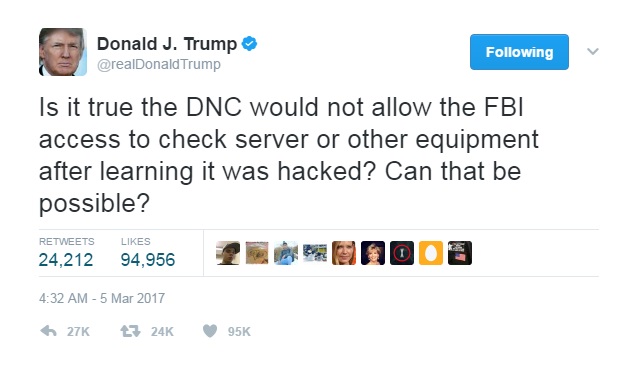 Why yes, Mr. President, it is true, as evidenced by multiple outlets that reported the DNC refused the FBI access to their servers to make an independent determination after investigating.