Between President Trump blowing up the internet on Saturday with claims that the Obama administration wire-tapped his campaign, the recent release of the Republican plan for healthcare and the new travel pause Executive Order, the mainstream media, Democratic politicians and liberal pundits are so busy chasing their tails, not sure what to be more outraged about that they haven’t been able to converge on a set narrative.

I am calling this the Trump Trifecta! Make no mistake, the unfolding of events was deliberately planned out and implemented.

It started Saturday when in a rapid series of tweets President Trump accused the Obama administration of wire tapping his campaign, setting the stage for the media to jump into the fray to defend Obama, which they did, by claiming that Trump has “no evidence,” which immediately came back to bite them in the butt as pundit after pundit provided the evidence by way of reports from the mainstream media, claiming their high level “sources” had discussed those wire-taps.

One specific screen shot from the NYT, dated January 20, 2017, has gone viral across the internet to prove how “Schizophrenic,” and “confused” the media narrative has become, basically calling themselves liars for their initial reports. 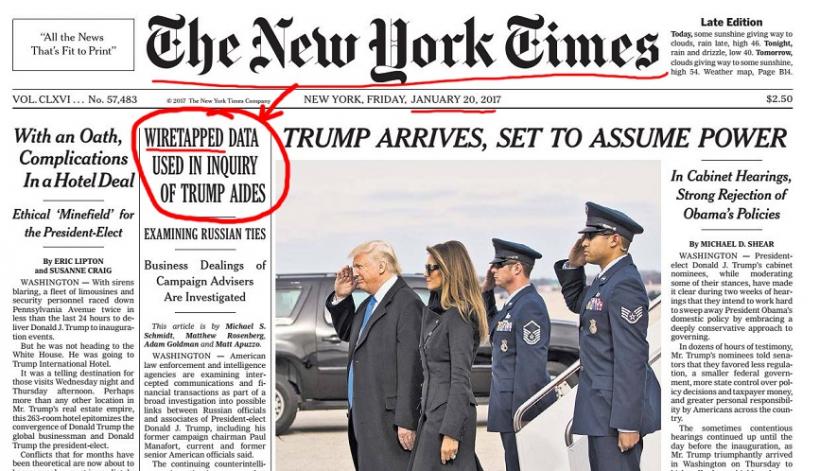 In that report, titled “Wiretapped Data Used In Inquiry Of Trump Aides,” the NYT wrote “The F.B.I. is leading the investigations, aided by the National Security Agency, the C.I.A. and the Treasury Department’s financial crimes unit. The investigators have accelerated their efforts in recent weeks but have found no conclusive evidence of wrongdoing, the officials said. One official said intelligence reports based on some of the wiretapped communications had been provided to the White House.”

For three days the media has been backpedaling, Democratic politicians have been hyperventilating on national television talk shows, and Obama era officials have been giving out carefully worded denials, in turn, completely unraveling their original claims that their were untoward dealings between the Trump campaign and Russia.

That was Trump’s initial volley and while I do not claim to know exactly what he was thinking or what he has seen to push him to make those statements, it isn’t unreasonable to determine, just from noting their pattern of behavior over the last nearly two years, that Trump knew they would all rush to attack, but in doing so, the media had to trash their own reports, basically destroying what was left of the credibility and Democrats had to admit they had seen no “hard evidence” even suggesting their was any collusion between the Trump campaign and Russia regarding the 2016 presidential election.

Time for step two and three!

While the media is still spinning over the wire-tapping issue, and Democrats and liberal pundits continued to try to twist themselves into pretzels to justify their past assertions regarding Russia, Monday comes along and WHAM…… the Republicans release their healthcare bill and Trump issues a new executive order on his travel pause.