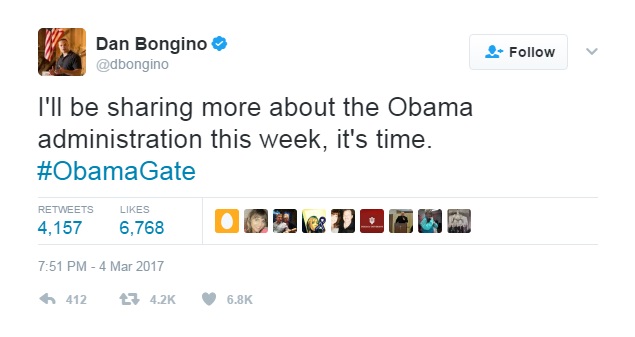 To put the following Fox News segment into context, it was published on March 4, 2017, as were the tweets saved in screen shots shown above, the same day that President Trump went on a tweet firestorm about Obama tapping his communications, so the follow up information that came out over the weekend is not addressed.

While much of the discussion below is short on the details, the important portion is that the journalist did speak to former White House insiders, from the Obama administration, that confirmed without a doubt that the administration was aware of the electronic surveillance on the Trump campaign.

For months Democratic politicians and the MSM have consistently “implied” that the Trump campaign colluded with Russia to influence the 2016 presidential election, despite the fact that they have provided no evidence of collusion. They breathlessly reported Flynn spoke to the Russians, yet not one accusation of criminality was leveled against him. Then came Sessions, “he spoke to Russian envoys,” as he did with envoys from dozens of countries, but the “implication” continued to be hammered relentlessly throughout the MSM, once again, with no evidence of any wrong doing, just “leaked” information that the meetings occurred.

With a series of tweets about the Obama administration tapping Trump’s communications, the dominoes have all started to fall, as the media and Obama lackies rushed to protect and defend Obama, they have now admitted publicly that there is “no evidence” of collusion between the Trump campaign and Russia, the exact opposite of what they have been reporting and asserting since the election.

Further confirmation that there is no evidence showing any collusion between the Trump campaign and Russia during the election, Fox News’ Chris Wallace hits Democratic Senator Chris Coons hard with the accusation that their continued insistence of collusion was being done with “no hard evidence,” is nothing more than an attempt to hinder Trump’s presidency and agenda. Wallace plays back Coon’s prior assertions that the intelligence community had transcripts of conversations between Russia and the Trump campaign and “After initially defending his comments as an attempt to encourage the Senate Intelligence Committee to be given access to the raw intelligence, Coons admitted there is no “hard evidence of collusion,” and apologized.” (Source)

In his attempt to backpedal his own prior statements and assertions, he has admitted their are transcripts, and while they provide no evidence of collusion, this further confirms Trump’s assertions that his campaigns communications were, in fact, monitored.

It isn’t only Obama era officials that are rushing to backpedal the Russia/Trump “collusion” narrative they have been relentlessly hammering for months, but the media itself is not only backpedaling, they are trashing their own prior reporting on the Obama administration wire-tapping the Trump campaign.