Civil War Commences: Liberals Rip At Each Others Throats As Trump Unites The Nation

Civil War Commences: Liberals Rip At Each Others Throats As Trump Unites The Nation by Susan Duclos

While the media left and right has given President Trump a “thumbs up” for his address to a joint session speech last night, with even one-third of Democrats describing President Trump as “specific” and “knowledgeable,” it is the reaction of the progressive liberal Democratic politicians on the floor last night that should be particularly concerning to all Americans.

There were a number of examples being highlighted this morning, from liberal female politicians laughing like children on a playgroundwhile making thumbs down gestures, to former DNC chair Debbie Wasserman-Schultz and the newly appointed deputy chair of the DNC after losing his bid to become the chair, Keith Ellison, refusing to stand during an ovation for Carryn Owens, the  widow of fallen Navy SEAL Ryan Owens, after Trump offered a tribute.

This was noticed by multiple people on social media, who referenced the disrespect at the time, not only for Owens, but for law enforcement, and for the father of a child killed by an illegal immigrant, one of which was Chief Content Officer for The IJR, who stated “Sobbing widow of slain Navy Seal receives 2 minute standing ovation. Debbie Wasserman Schultz & Keith Ellison stay firmly seated, no claps.” He later clarifies for the record “Carryn Owens had 2 ovations. DWS & Ellison stood for her intro. The really long, emotional 2 min one, they did not stand.” 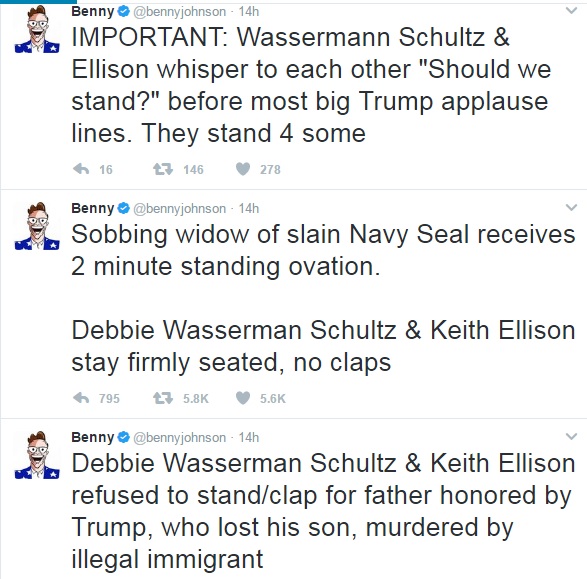 While those examples simply show the sheer pettiness of the progressively liberal portion of the Democratic party, the most concerning reaction, or lack there of, to which speaks directly to the lack of respect for Americans and for the jobs they were elected to which is to “represent” the Americans in their states that voted them into office, was when Trump said “My job is not to represent the world. My job is to represent the United States of America.”

As can be seen above, after that line, the Democratic representatives of the House, did not to stand and applaud. Refusing to applaud in areas where one side does not ideologically agree is nothing new, it is almost a time honored tradition allowing their base to see they do not agree, but considering the very oath of office these representatives take when elected, states clearly “I do solemnly swear (or affirm) that I will support and defend the Constitution of the United States against all enemies, foreign and domestic; that I will bear true faith and allegiance to the same; that I take this obligation freely, without any mental reservation or purpose of evasion; and that I will well and faithfully discharge the duties of the office on which I am about to enter: So help me God,” it is seriously disturbing to see them basically admit they do not agree with that particular statement.

A refusal to stand and applaud Trump’s immigration statements is understandable, considering Democrats are on the opposite side of the spectrum, or his terrorism stance, again for the same reasons, in fact any interest to which there is an ideological difference is a chance to make a silent “statement” to their supporters by refusing to stand and applaud, but that one statement, one to which the president, members of the Senate and the House, should always publicly be on the same side of, shows that Democrats do not agree that it is an elected officials duty and obligation to put their citizenry first.

That ladies and gentlemen has the potential to cost Democrats the entire moderate segment of their party, in order to appease the radical left portion of their party.

The context, the meaning and the message given there cannot be overstated.

After Trump’s speech last night, liberal darling Van Jones, now infamous for saying using the term “whitelash” on election night in reference to why he thought Trump won the presidential election, did the unthinkable in the eyes of the progressive liberal portion of the Democratic party, when he said the following, according to the video below and transcript from Fox News:

“There are a lot of people that have a lot of reasons to be frustrated with him, to be fearful of him, to be mad at him,” Jones said. “But that was one of the most extraordinary moments we have ever seen in American politics…period.

“And he did something extraordinary and for people who have been hoping that he would become unifying, hoping that he might find some way to become presidential, they should be happy with that moment.

Jones said Trump’s critics, who might be hoping he remains a “divisive cartoon,” should be worried after the speech.

“That thing you just saw him do, if he finds a way to do that over and over again, he’s gonna be there for eight years,” Jones stated, adding that he believed much of Trump’s speech was “counterfactual.”

“He did something tonight that you cannot take away from him. He became President of the United States.”