‘The Doomsday Scenarios Are Real’ – ‘Could Kill Hundreds Of Millions’

The story over at the Daily Mail on Saturday morning reports that according to Microsoft founder Bill Gates, “biological terrorism could kill hundreds of millions of people as genetic engineering unleashes terrifying new weapons”.

Warning that government’s aren’t doing enough to prepare for bioterrorism and he absolutely expects a devastating new pandemic to strike within 15 years, the Daily Mail story doesn’t report anything upon the unholy alliance unearthed by Wikileaks between Bill Gates, Monsanto and the US government as Mercola reported back in 2011. For those who are unaware, Gates is one of the largest shareholders in Monsanto, considered to be the most evil corporation in the world. So, what does he know that we don’t know? We should remember that before Monsanto got into the food business, they were highly involved in the ‘death and war’ business.

In fact, despite Gates spending billions ‘funding a global health campaign’, Gates and George Soros have long been linked to ‘the global depopulation agenda’. We’ll take a much deeper look at Gates ties to the depopulation agenda as well as a frightening new warning about the global food supply below but first, from the Guardian story.:

A chilling warning that tens of millions of people could be killed by bio-terrorism was delivered at the Munich security conference by the world’s richest man, Bill Gates. Some of Gates comments included:

“We ignore the link between health security and international security at our peril.”

“The next epidemic could originate on the computer screen of a terrorist intent on using genetic engineering to create a synthetic version of the smallpox virus … or a super contagious and deadly strain of the flu.”

US and UK intelligence agencies have said that Islamic State has been trying to develop biological weapons at its bases in Syria and Iraq. However, they have played down the threat, saying that the terrorists would need people with the necessary skills, good laboratories and a relatively calm environment free from the confusion and chaos of conflict zones.

“Whether it occurs by a quirk of nature or at the hand of a terrorist, epidemiologists say a fast-moving airborne pathogen could kill more than 30 million people in less than a year. And they say there is a reasonable probability the world will experience such an outbreak in the next 10 to 15 years.”

“It’s hard to get your mind around a catastrophe of that scale, but it happened not that long ago. In 1918, a particularly virulent and deadly strain of flu killed between 50 million and 100 million people.

“You might be wondering how real these doomsday scenarios really are. The fact that a deadly global pandemic has not occurred in recent history shouldn’t be mistaken for evidence that a deadly pandemic will not occur in the future. And even if the next pandemic isn’t on the scale of the 1918 flu, we would be wise to consider the social and economic turmoil that might ensue if something like ebola made its way into urban centres.” 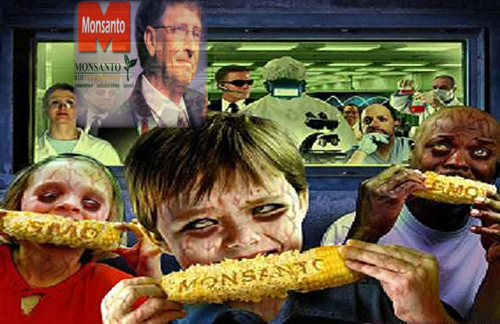 According to this August 2016 story by S.D. Wells over at Natural News, Adolf Hitler too had a depopulation agenda that he kept under wraps until so many millions disappeared that the world began to figure out what was happening there. If Bill Gates, George Soros and the globalists really do have a depopulation agenda, should we really expect them to outright announce it? Well, surprisingly, as we read from Natural News, Gates already has done so.

What if Hitler had come right out and announced his plan to create a master race and eliminate everyone else by shooting them in the head with two bullets, starving them to death, or putting them in gas chambers?

How many people around the world would have supported him and said they liked the idea of getting rid of all the “undesirables” and blaming them for all the world’s problems?

Well, Bill Gates and George Soros are also all about depopulation, but there’s no way they’re going to come right out and say it … or has Bill already done so? What if you found out right now, by video, that Bill Gates, along with his partner in crime, are planning on reducing the world’s population by about 5 billion over the next decade, and that they plan on using vaccines and genetically modified food to do so?