Did Trump Just Pull Off The Biggest Sting Operation in History, Against The ‘Deep State’ Within The Intel Community?

Did Trump Just Pull Off The Biggest Sting Operation in History, Against The ‘Deep State’ Within The Intel Community? by Susan Duclos

Anyone who ever watched the television show The Apprentice when Donald Trump was sitting in the “Big Chair” understood how he used adversity in business to weed out the weak links. Anyone that followed his candidacy from his announcement when he polled at like three percent, to weeding out his opponents one by one to become the Republican nominee, then on to win the general election, saw how he used the obvious anti-Trump bias within the liberal media, against them for his benefit, by using their own assumptions to force them to cover things like his “pre-debate” presser which ended up being wall-to-wall coverage of Clinton sexual abuse victims, or their assumptions that a news conference would be about his “birther” statements, just to provide him more wall-to-wall coverage of military veteran after military veterans endorsing him.

If there was one thing Trump knew and still knows, it is that he can count on the media…….. to cover anything they perceive as anti-Trump.

A time line of events shows that is it not only possible, but extremely likely, that President Trump and Michael Flynn, along with other White House insiders have just pulled off the biggest sting operation in history against the “deep state,” in order to weed out the traitors within the intelligence community, and that they used the liberal media and their inherent bias to pull it off.

Before President Trump was inaugurated, he knew there was a serious issue within the intelligence community, evidenced by a January 3, 2017 tweet regarding a briefing that was delayed, where he stated “The ‘Intelligence’ briefing on so-called ‘Russian hacking’ was delayed until Friday, perhaps more time needed to build a case. Very strange!” 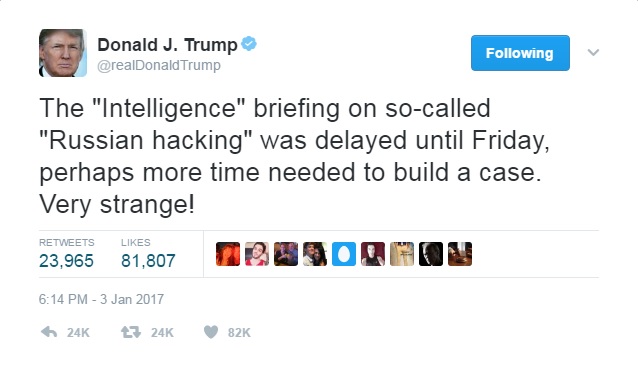 The trap was set,  and within a day of that tweet the media once again scurried to report “Trump attacks” intelligence community, reported both CNN and Washington Post, among others, with NBC headlining with “DNI Chief Clapper Takes Swipe at Trump, Assange as He Defends Russia Hack Intel.”

On January 5 , 2017, Trump went after them again, encouraging Congress to investigate the intelligence leaks, asking first “How did NBC get “an exclusive look into the top secret report he (Obama) was presented?”  Who gave them this report and why? Politics!” He followed that up on the 6th, with “I am asking the chairs of the House and Senate committees to investigate the top secret intelligence shared with NBC prior to me seeing it.” 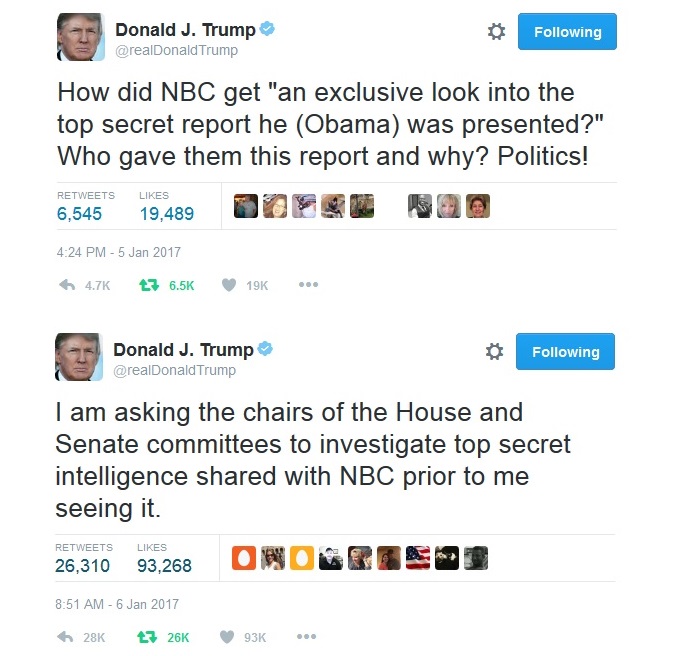 By January 11, 2017, knowing their were significant leaks coming from somewhere, Donald Trump set up a sting operation. In order to eliminate the possibility of leaks regarding his intelligence briefings coming from within his inner circle, he schedule a briefing and didn’t inform anyone in his own transition team, yet immediately after the briefing, word leaked.