Prepare For The Worst As Worldwide Food Shortages Now Being Reported, Including In The U.S.

Prepare For The Worst As Worldwide Food Shortages Now Being Reported, Including In The U.S. by Susan Duclos

While the causes differ, there is an extraordinary amount of recent reports regarding food shortages coming out of late, from a number of locations around the world, including the U.S..

Over 17 million people are currently in crisis and emergency food insecurity levels in Djibouti, Eritrea, Ethiopia, Kenya, Somalia, South Sudan, Sudan and Uganda, with another 12 million in across Somalia, Ethiopia and Kenya, suffering from food shortages, blamed on weather, and a decrease of expected rainfall received in the Horn of Africa, according to Food and Agriculture Organization (FAO).

In Yemen, over 2 million are in need of food aid, with 14 million labeled as “food insecure,” with child malnutrition having risen to 63 percent, blamed on poverty, war damage, and a naval embargo by the Saudi-led coalition, with reports of people rummaging through rubbish to survive.

Food shortages in Tanzania is leading to increased political instability, reminiscent of the horror stories we have witnessed coming out of Venezuela over the past few years.

Europeans are also suffering from vegetable shortages, with reports that grocery shelves have been stripped of items such as green produce like lettuce, broccoli and spinach, with other shortages affecting zucchinis, eggplant, and peppers, with signs above the bins stating “Due to poor weather in Europe, there are availability issues on this product. To ensure we offer you the best quality there is a maximum purchase of 6 units.” 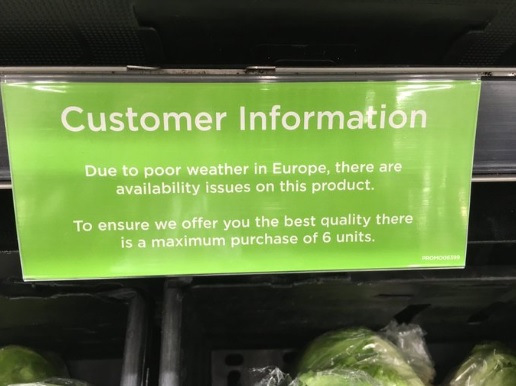 As the food shortage crisis deepens, prices for these items have also increased dramatically, with the Mirror.UK and other publications reporting a 140 per cent increase in the price of courgettes (zucchinis), a 122 percent increase for broccoli and a 63 percent increase for lettuce, with three supermarket chains rationing the purchase of fresh produce.

So America’s “stash” as they call it, of bacon has gone from 62 million pounds to 17.8 million pounds (some reports claim 17.7 million pounds) in just one year? That is quite a decrease. Even more shocking than the decrease of supply is the reason they are giving for it. They are claiming it is because “America, and the world, has been pigging out. Bacon consumption has risen so fast, it’s been impossible for farmers to keep pace with demand.”