While many, including ANP, have noted that President Trump is having to purge the “enemies” within his administration and agenciesthat fall under it’s authority, there is another disturbing trend being noted where agent provocateurs are infiltrating patriot groups, forums, comment sections of conservative sites, and other groups, declaring that to clean up America “Martial Law is the only way.”

Known for his “color revolutions” across the world where nations are divided to the point of imminent civil war, it appears as if America is  in George Soros’ cross hairs.

The Daily Caller reported on February 3, 2017, that a group funded by Soros played a significant role in the Berkeley riots, while riot organizers are proudly touting their “success” at Berkeley, stating that they should be “the model for how the movement needs to take things now in the future,” and calling for more “militant protests,” to push their fight against “fascists” by “any means necessary.”

For those that did not see the utter chaos, the vandalism, fires and attacks on individuals, as well as confrontations after the Berkeley riot, look at what the fanatic above is calling a “model” of what “protests” should look like going forward.

The Daily Caller also highlighted another disturbing issue on February 4, 2017, where the search engine Google “redefines” the word fascism to attack conservatives. The definition of fascism according to Merriam-Webster is “a political philosophy, movement, or regime (as that of the Fascisti) that exalts nation and often race above the individual and that stands for a centralized autocratic government headed by a dictatorial leader, severe economic and social regimentation, and forcible suppression of opposition.” 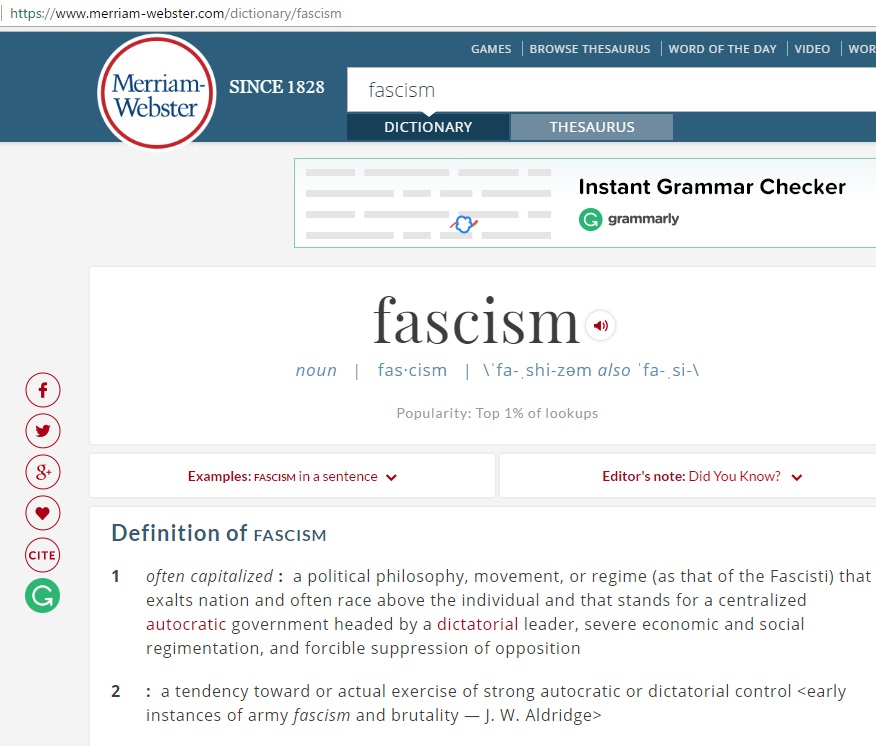 Yet if you search Google for the term, the result “defines fascism as, ‘an authoritarian and nationalistic right-wing system of government and social organization’.”

So on one side, we have a large tech company that was known for their support of the woman that shall not be named, and publicly opposed to Donald Trump during the general election, which has carried over to opposition to President Trump’s polices in his first weeks in office, deliberately redefining the word “fascism,” to demonize the “right-wing,” giving ammunition to the Soros funded rioters to use as justification for violence.

That ladies and gentlemen is the coordinated “action” being implemented in America, daring law enforcement and the Trump administration to “react.”

The actions above, from Soros funding being behind riots in the U.S., to group organizers calling for more “militant” protests, meaning riots, is all geared toward causing a harsh reaction from law enforcement, the Trump administration and setting up potential violent confrontations with members of the patriot movement, who largely was supportive of Donald Trump during the election cycle.