While the protest at UC Berkeley turning into a violent riot to prevent to Milo Yiannopoulos’ speech, has spurned a much-needed public awareness about the First Amendment right of free speech being stifled on college campuses, as well as the question of whether colleges such as Berkeley that not only allow this type of violence to prevail and cause the cancellation of an invited speaker, but had staff members allegedly participating in the violence, should continue to receive any federal funding, it has also exposed student groups that are now encouraging more violent protests like Berkeley.

Starting with the Barnard-Columbia Socialists group, which reportedly held an open discussion forum which included students questioning whether “previous activism against Trump and his boosters, including anti-feminist provocateur Milo Yiannopoulos, had been violent enough……”

Several students chuckled when another said that aiming fireworks at campus buildings was effective, apparently referring to Yiannopoulos’s scheduled Wednesday appearance at the University of California-Berkeley. That administration canceled the event in the face of widespread violence and property destruction by alleged non-student protesters who set off fireworks, threw bricks and even pepper sprayed a Trump supporter.

While this is just one in a long list of examples, it does highlight the debate of whether colleges that allow not only liberal snowflake activists to violently protest any speakers they do not agree with, should have their federal funding cut as President Trump recently suggested, but whether parents of those attending these colleges should be spending tens of thousands of dollars for tuition to a college that is allowing their children to be endangered by this type of violent behavior. 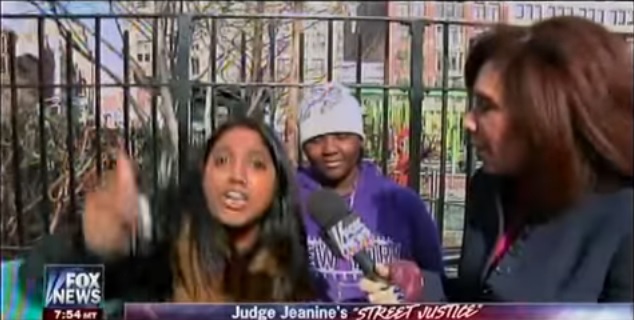 Below in a segment of Judge Jeanine Pirro’s “Street Justice” she visited a college campus, asking if the violence seen on television screens across the nation at the UC Berkeley was “acceptable,” and the response was to be verbally attacked by a woman screaming about Nazi’s and white supremacists, claiming that free speech doesn’t apply to them, stating “right-wing people do not have the right to spew hatred and bigotry.”

When Judge Jeanine attempted to have a “civil” conversation with the little snowflake, the girl became completely unhinged, screaming “F*ck Trump, F*ck these white people that think that they get to say…..” before she was interrupted by another woman talking about “tolerance.”

By the 1:54 minute mark, Judge Jeanine had enough, and looked right into the camera and spoke to parents that are paying tuition, saying ” You know what? If this is what our colleges are doing, don’t pay tuition any more.”

Especially noteworthy is the portion when the unhinged snowflake is asked if she understands what Free Speech means, which her answer makes it clear she doesn’t, which should also show parents across the nation that their higher education institutes are not even “teaching” students the basics about the U.S. Constitution anymore.

WHORE HOUSES AND MENTAL WARDS WOULD BE MUCH CHEAPER

The good Judge Pirro is not the only one highlighting that paying the extremely high college tuition is a complete waste of money for parents, as a conservative Professor, harassed for daring to point out in 2016, that a Catholic School should not be promoting a humanistic view of the world above a Godly one, has the same message for parents, in his book “Out of the Ashes: Rebuilding American Culture,” where he states the following: