Throughout the presidential campaign, Donald Trump as the Republican candidate for president was consistently accused of “punking the press,” which he did fabulously, one of the few truths they told then or tell now. Trump used the mainstream media’s bias against them by inviting them to “events” to which they made incorrect assumptions about, then proceeded to cover things like Trump with women that accused Bill Clinton of sexual abuse, or tricking them into national coverage of veterans telling the media why they supported Trump, when the media assumed they were covering a “birther” statement only. Infowars called it “Businessman plays press like a fiddle,” calling him the ultimate troll.

TRUMP ADMIN HAS THE MAINSTREAM MEDIA CHASING THEIR TAILS

Like the dog in the image above, the Trump administration still has the media chasing their tails, even more so since Friday when he was inaugurated as the 45th President of the United States.

The first Executive Order the newly inaugurated President signed was one that limits the penalties to small businesses and individuals from Obamacare, a move that was expected, which the media was bemoaning the thought of before he actually signed it, yet what did the media spend more time reporting after he signed it? The White House Press Secretary Sean Spicer’s comments about the size of Donald Trump’s Inauguration crowd.

The broadcast morning and evening news shows have spent 20 minutes and 18 seconds focusing on White House Press Secretary Sean Spicer’s comments about the size of Donald Trump’s Inauguration crowd. Meanwhile, when President Trump signed a far more consequential executive order that limits the penalties from the Affordable Care Act, the same networks spent only 1 minute and 39 seconds covering it – less than one-twelfth the coverage.

Does anybody, for one second, think it is accidental, or coincidental that the MSM covered Spicer’s comments so much more than the Obamacare Executive Order? Does anyone that watched Trump the candidate throughout the campaign season doubt for one second that the press conference where Spicer took them to task, to which they are now wasting so much coverage on, was conducted for that specific reason?

Trump is still punking the press, has them reporting on the BS he wants them to focus on, while he goes about doing the job he promised he would do when he was campaigning.

Here is another example, since Friday, President trump has made moves on trade, withdrew from the TPP, spoke with union leaders, put a hiring freeze on federal workers, bombed ISIS 31 times,  signed five more Executive Orders, changed the White House website to English only, just to name a few things, yet when we look at the political site Memeorandum, which tracks what political stories are generating the most buzz, we see them focusing more on Trump listing January 20, 2017, his inauguration day, as “National Day of Patriotic Devotion,” in the Federal Register, and how Trump told lawmakers illegals voting cost him the popular vote.

Look at the wasted ink dedicated to just those two issues as they allow him to distract them from reporting news that people actually care about: 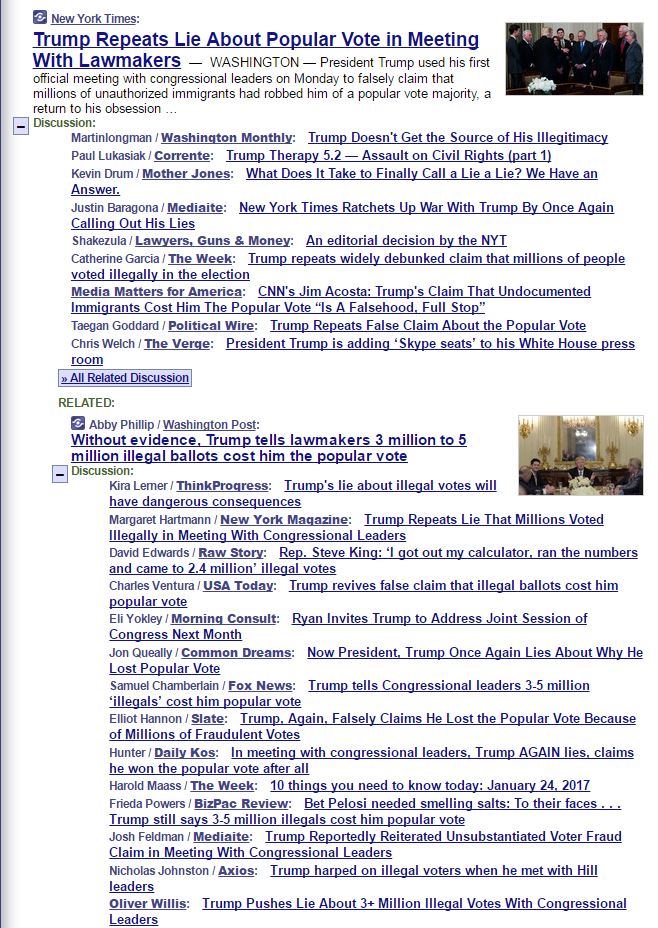 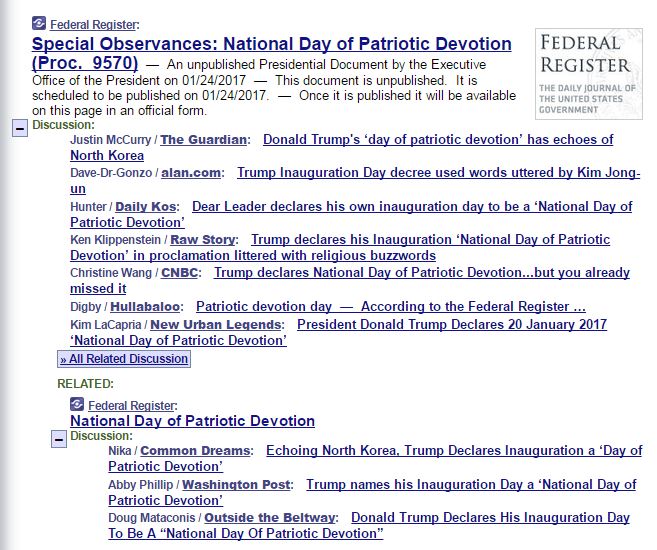 The mainstream media is proving that despite their past complaints that Trump had “rick-rolled” them by trolling them, his administration is still punking them into wasting more ink on irrelevant stories than on focusing on what he is doing.

ALERT! FAKE NEWS FROM THE MSM YET AGAIN

Before we discuss a far left, liberal progressive that despises Donald Trump, issuing a scathing rebuke of his fellow liberal brethren, I want to highlight today’s “fake news” headline from the Washington Post, which states “Dear media: The Trump White House has total contempt for you. Time to react accordingly.”