Indian Prime Minister Narendra Modi has announced that the 500 ($7.60) and 1,000 ($15) rupee banknotes will be withdrawn from the financial system overnight. They can now only be converted to Rs 100 (~$1.50) or lower denomination notes, at bank branches or post offices.

The result was bank runs and people desperate to convert currency. India’s economy is based primarily in cash, and the liquidity crisis for the elderly or people not able to convert their currency because of logistical challenges has the potential to lead to a social crisis on a scale that is hard to predict.

Economists say the move will be beneficial in the long run, as it is targeted at weeding out tax evasion and corruption. Unaccounted money makes up nearly a fourth of the economy.

The banknote ban is very simply a way to facilitate negative interest rates in the future and to make taxation of every note in circulation much easier. It’s also the first step towards a cashless society. 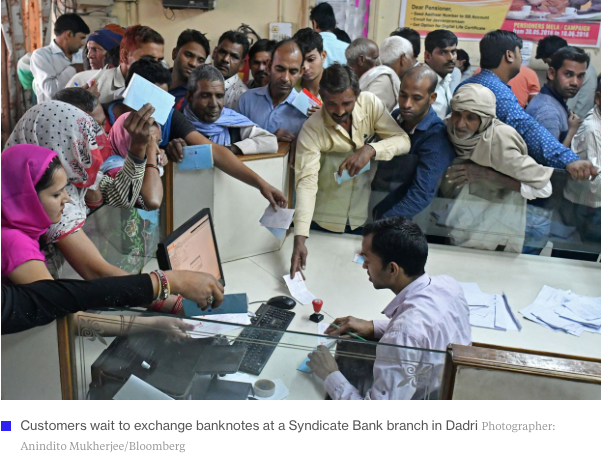 Credit Suisse estimates more than 90% of consumer purchases in India are made in cash.

Prime Minister Modi was quoted over the weekend as saying, “I want to tell my small merchant brothers and sisters, this is the chance for you to enter the digital world.” He then threw in:

Bloomberg reported that the ban has triggered a gold rush. Here is how they described it:

“Jewelers who had shut shop for the day on Nov. 8 had to reopen their stores within a couple of hours and were selling gold up to 4 a.m.,” Chirag Thakkar, a director at gold wholesaler Amrapali Group, said by phone from Ahmedabad in Modi’s home state of Gujarat. “Customers were lining up with bags of cash. Some jewelers even had to call the police to organize the crowds.” Customers paid as much as 52,000 rupees per 10 grams, almost double the current prices (emphasis mine), he said.

Larry Summers — among others — has proposed banning the $100 bill here in the U.S., using the argument that it makes combating money laundering and terrorism easier. Once again, be clear that this is simply a power grab to make it easier to track and tax every note. No cash, no bank runs… and in the brilliant minds of the ivory tower academics, this means less of a probability of crisis.

It also gives more power to government, which regulates the banks, and if you think corruption is bad now, wait until your local senator has the power to make or break your local financial institution.

Just last week, banking giant UBS proposed that eliminating Australia’s $100 and $50 bills would be “good for the economy and good for the banks.”

As more and more governments move to try and implement this latest power grab, the protection that gold provides as an instrument of exchange and store of value will contribute significantly to the historic gold bull market we’re about to embark on.

The war on privacy, freedom, and cash is real, and we’re just starting to see the first stages of it. Keep vigilant.

The Dollar & The Bond Market: A Dangerous Dance

As I outlined before, a rising dollar increases the likelihood in major sovereign defaults among emerging markets that issued their debt in dollars.

As the dollar rises, the debt becomes more expensive to pay back. That will be a problem since emerging-market nonbank borrowers have accumulated more than $3 trillion in dollar-denominated debt, according to Bank for International Settlements data.

Bloomberg reported investors are fleeing funds that focus on the debt, yanking a record $6.6 billion from emerging market bond strategies in the week ended Nov. 16, according to EPFR Global data.

Throw in a rate rise in December, and the resulting volatility will be important to keep an eye on.

I’ll be brief on this point because you can read past editorials, which go into more detail, but be very clear that money rotating globally out of the bond markets will lead to simultaneous new highs in the dollar, the U.S. stock markets, and gold….just not yet for gold.

Also be clear that gold is the smallest market of the three. A small amount rotating into gold will make a disproportionate difference.

It’s not time yet, but it’s playing out exactly as I predicted earlier in the year. That’s not to brag, just to emphasize that understanding the big trends is important.

It’s the same group that tells you inflation is good for gold, and it can be, but it’s not the only indicator, which is why inflation expectations have ticked up while gold is lower.

Inflation will not be the next major catalyst for sustainable higher prices. Hence the reason gold is going lower despite record closes for U.S. stock indices, a 14-year high for the dollar, and the biggest move in 10-year Treasuries in 13 years.

That antiquated way of thinking is why many experts will miss the first part of the next leg up in 2017… a leg up that will be explosive, and one that we will be well positioned for.