Can You See the Pattern in Gold Prices?

Can You See the Pattern in Gold Prices?

A nine-year low in the unemployment rate has most analysts calling for a December rate hike. A hike I thought was more appropriate in September. The reasoning was simple; not raising in September made a December hike very probable and very predictable, allowing traders to front-run the Fed.

That part has been accurate as the 10-year Treasury note hit its highest level since last year, peaking at 2.45% on Thursday December 1st.

The major stock indices here in the U.S. continue to make record highs, while gold continues its downward trajectory.

I’ll say it again, if it doesn’t break out it will break down. Expect lower prices. It may not happen in a straight line, there will likely be head-fakes, but I don’t expect a sustained run higher until we see gold drop near the $1,050 level.

(Can you see the pattern?)

Copper finally saw a brief pullback closing near the $2.62 level, down 1.5% for the week.

The Week in Juniors

On November 30, 2016 Vendetta Mining announced some excellent drill results from the 2016 program at the Pegmont Lead-Zinc Project in Queensland, Australia.

Highlights from the release:

“The progress at the Pegmont project has been significant. We have successfully confirmed the shallow potential of the Burke Hinge Zone, discovered a high grade fold between Zones 2 & 3, we are able to successfully target mineralization in Zone 5 and in doing so have validated the geological model of zinc grade increasing to the west. We look forward to receipt of the metallurgical test work, updating the NI 43-101 resource which we intend to release early next year and the commencement of the 2017 program in Q1.”

The company expects to deliver an updated NI 43-101 resource estimate, including for the first time Zone 5 and the Burke Hinge Zone, early in 2017. Over 13,500 meters of drilling will be incorporated into the new estimate.

Pegmont is a stratiform, Broken Hill-type deposit that outcrops with an overall shallow dip to the southeast and is hosted in a magnetite-rich banded iron formation within high-grade metamorphic rocks. The project consists of three granted mining leases and two exploration permits that cover an area of approximately 3,468 ha.

Otis Gold delivered some good numbers once again. On November 29, 2016 the company reported it had intersected:

Drilling is complete but there are still 12 holes being logged and assayed.

The most recent set of results continue to show that the Aspen Formation has the potential to host significant gold mineralization. 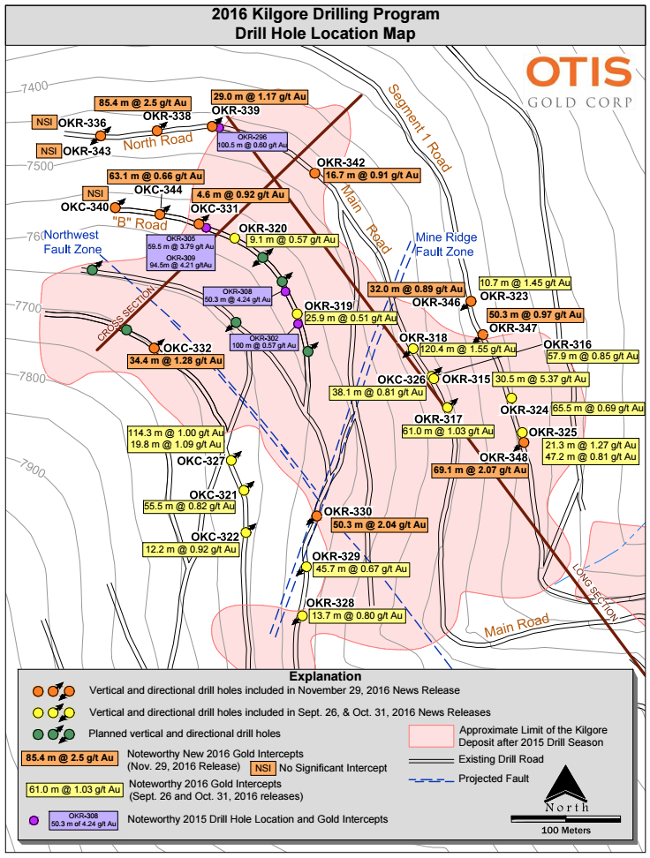 “We continue to be encouraged by the excellent results we are encountering in both the Lithic Tuff horizon, host to a majority of the existing mineralization at Kilgore, and the Aspen Formation, a rapidly-emerging gold host that is becoming better understood by Otis with each successive drill hole. It is very clear to us that the Aspen Formation sedimentary unit is a critically important feature of gold mineralization at Kilgore and for the potential expansion of the deposit. Lastly, we are pleased to have completed the expanded 40 hole drill program on budget and on time.”

Gold mineralization is of the traditional disseminated, bulk-tonnage type similar to that comprising the classic volcanic-hosted gold deposits at Round Mountain, Nevada and McDonald Meadows, Montana. The deposit features very attractive metallurgy with excellent gold recovery averaging greater than 80% at 1.5″ crush size based on column leach test results.

The positive drill results followed a $500,000 private placement which was announced on November 25, 2016. The financing was done without a warrant.

I’ve looked at Otis in the past and like the project and people involved. However, I’m not a big fan of the share structure. Although, to be fair to management, this financing is one of several it’s been able to execute without a warrant.

On December 2, 2016 Mawson Resources announced it had closed its previously announced financing of C$6 million.

“We are pleased to close the Private Placement, and wish to thank the Sentient Group and existing funds for their continued support. We also welcome our new shareholders. With drill permits recently received, we now can rigorously and systematically drill test the Rompas-Rajapalot gold discovery for the first time. Post financing, Mawson will hold more than C$9 million cash which will enable the Company to execute a 10,000 to 13,000 metre drill program. Drill rigs are set to start turning over the coming weeks.”

Following closing of the private placement, the Sentient Group holds approximately 37.45% of the issued and outstanding common shares of Mawson on a partially diluted basis.

With permits in hand and C$9 million in the bank, Mawson is worth watching as it has a large, district-scale land package that has delivered near-surface high-grade gold intercepts in the past.

The team at Mawson believes the targets they will be testing may be the most prospective yet. The truth machine starts turning in a few weeks. Looking forward to results from the program.

Another drill program worth keeping an eye on is drilling at the 100%-owned Ergama copper-gold project.

On November 29, 2016 Mariana announced it has commenced the drilling of an initial seven-hole diamond drill program at its 100% owned Ergama copper-gold project in Balikesir Province, western Turkey.

“Whilst the high grade gold and copper Hot Maden project advances to development, Mariana continues to work its diversified portfolio of advanced and early stage exploration projects.  Ergama is a 100% owned, prospective, copper-gold porphyry target in a region that hosts a number of key discoveries, development projects and mines and Turkey’s largest gold mine Kisladag operated by Eldorado Gold.

“Mariana’s objective is to confirm mineralisation and geological model being a mineralised copper gold porphyry system as well as high grade gold and silver epithermal mineralisation and, if successful, will lead to the next stage of drilling at Ergama.

“I look forward to updating the market on Hot Maden soon and further news from Ergama in the New Year.”

Everyone knows the spectacular results that Hot Maden has delivered. I’ll be watching the drill program at Ergama closely.

The Ergama Project license covers an area of 2,168 Ha (21.6 km2), and is located in western Turkey between the well mineralized Biga Peninsula and Eldorado Gold’s Kisladag gold mine (currently Turkey’s largest gold mine with gold production of 280,000 oz in 2015).